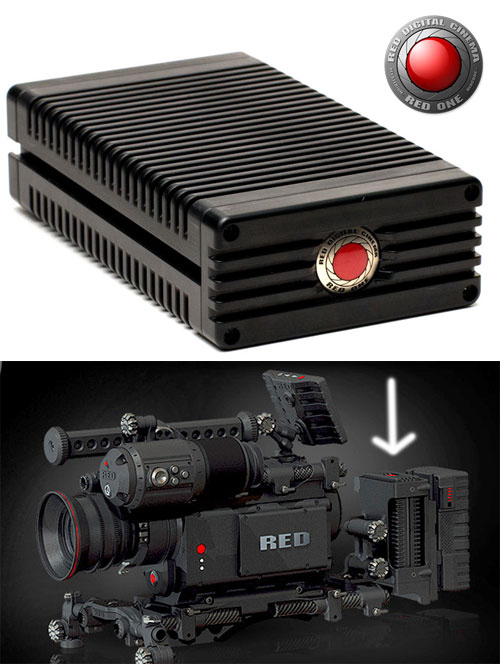 Jarred Land announced on Reduser the other week that Red Drives were shipping.

For those not keeping score, the Red Drives is the hard drive recording solution for the Red One camera. Up until Red Drives shipped, your only recording option was the special high speed CF cards (compact flash) recording officially 4 1/2 minutes of 4K at 24p apiece *. Since only one Red CF card can be loaded at a time, this was roughly the equivalent of a 400 foot film load. Survivable for steadicam work, a nonstarter for sitdown interviews.

That changes with the release of the Red Drives – you can record over TWO HOURS of 4K footage to the Red Drives, and many more hours of 2K footage (details below).

The Red Drives are comprised of two 160GB 2.5″ mechanism hard drives set up in a RAID 0 (striped) configuration. This doubles the capacity and speed versus a regular drive….and also doubles the chances of failure – if one drive fails, you’d lose ALL the data on the pair due to how information is split between the two.

I emailed Ted Schilowitz, Red’s Leader of the Rebellion, a bunch of questions about the Red Drives, here’s what he had to say:

Question 1.) Red Drives are shipping. Great! What is the capacity, and is that any different from the USABLE capacity (beyond the 320 formats to 296GB stuff) – is there any partitioning going on?

Answer: Useable capacity is just that, slightly under 300 gigs – no paritioning. Although I would not recommend shooting the full capacity of the drive unless you absolutely have to – just as an insurance policy – shoot less than an hour per drive and then download and back up your footage (remember this is your digital neg.)

Question 2.) Given that, roughly how much [email protected] will fit on one?

Answer: roughly 8 hours of 2k at 24p (mikenote: yikes! That’s a lot of stuff to put on one piece of physical media – aka – don’t shoot all day on one of these unless you have no other choice.)

Question 4.) Are there any feature differences between Red Drive and CF card, other than one’s bigger?

Answer: Solid State vs. Spinning media – solid state more reliable, more expensive per Gig (but getting cheaper all the time) Short run times creates it’s own benefit in splitting up the media load as you are shooting

Question 5.) Can you mix and match 2K & 4K footage on the same Red Drive, presuming you’re always at the same frame rate?

Question 6.) Can you mix frame rates on a Red Drive?

Answer: Yes as long as you are in the same project

Question 7.) Is there a Red Drive FAQ anywhere?

Answer: Not that I know of, this would be the first version of that 🙂 unless someone from the community put something up on RedUser already

Question 8.) How long does it take, at maximum FW800 read speeds, to read off a full Red Drive (such as if you were transfering to a non FW800 RAID on studio Mac)?

Answer: Good question – It’s the same FW 800 as on a FW drive you would connect to your Mac – so you can use the same benchmarks as that for data transfer (maybe barefeets has specs on how long it takes to transfer 100 gigs via FW 800 on an intel Mac?

(mikenote – talking to a production I’ve been consulting with, roughly 30GB of data took roughly 7 minutes to copy off to high speed storage. That works out to 70-75 MB/sec. Knowing what I do about drive performance, that transfer rate is likely to drop if you are reading from the last portions of a full Red Drive. So I’d guesstimate that reading a full Red Drive (about 298GB) would take something like an hour and a half at best…if and ONLY if you had high speed storage that was NOT on the same FireWire bus…and in Macs, the built in ports are ALL on the same bus).

Question 9.) How much impact does it have on battery life to use Red Drive as opposed to CF?

Answer: Minimal – we are seeing over 90 minutes of Runtime with a fully charged RED battery, and the RED Drive attached

Question 10.) Is it always spun up, or does it spin down after inactivity?

Question 12.) If it ever spins down, is there a setting as to how long to wait until it spins down?

Question 13.) What firmware build is required to use Red Drive?

Answer: Recommended firmware now is build 13 – I’ll have to check to see how far back we go to support the drive

Answer: Should be able to get to higher frame rates than 75fps with the RedDrive – experimenting now on that – stay tuned

(mikenote – so I guess that means watch what happens in the next few builds – 14-15, and perhaps beyond, to see if they can squeeze more performance out of it)

Question 16.) Speaking of which, how far out is Red Flash Drive?

Answer: At least a few months

Answer: up in the air – depends on market conditions when we do our first release

Question 18.) Will it be able to push the 2K fps any higher as earlier suspected?

Answer: Probably. I/O is the bottleneck, not the sensor itself

Question 19.) Red Drive availability – are they shipping in bulk, or trickling out?

Answer: Coming out in small numbers for the next couple weeks, should be shipping at full speed some time in Feb

(mikenote – my client with a camera in the first batch got his, somebody else got 8 units delivered already)

Question 20.) Since I’m about to get my camera (#417, got the “head’s up” email last week), will I get a Red Drive with my order, or are you still catching up? Same applies for other Red Ones about to ship, is the nature of that question.

Answer: You will probably get a Red Drive with your order. Brent and the customer service team can update you on that.

(mikenote – I’m delaying receiving my Red (torture!) while I’m out of the country, will get it delivered once I’m back, but signs are looking good)

So that’s what’s up with Red Drives. If you have any more questions, post them as comments and I’ll forward them in a batch to Ted.

Some more information/thoughts of my own:

Red Drive Cons:
-since spinning drives, if crash the heads (random failure or high G-loads from handheld/car/plane) higher chance of failure – not as stable/safe a media as CF
-larger
-heavier
-slightly less battery time than CF
-not as compact a configuration as CF

Which to get? Both. Depends. In cinematic style shooting, there will be times to go CF (steadicam, critical non-repeatable shots, or when low weight is paramount), and times to go Red Drive (sitdown interview on sticks, most shoulder mount non-critical, non-physically aggressive camera work). Some shooters may shoot CF always (steadicammers), some may shoot Red Drives always (stick shooters on non-critical subject matter).

Oh, and another tidbit to make up for the non-questions above – you CANNOT record simultaneously to Red Drive and CF, nor can you transfer from CF to Red Drive as a backup (too bad).

The Red One is very much an erector set – you can build whatever device you need for the day. Knowing which bits to have to build out what you’ll need is one of the many Red related matters that I consult on.

* (although we recorded a mostly sky shot for about 6 minutes once – Redcode RAW is variable bitrate, so things like full frame wide shots of mountains covered with trees with fine leaves will tend to result in higher data rates and lower record times; shooting smooth dunes with blue skies would result in lower data rates thus longer record times)