Last Days in Vietnam isn’t the first trip to the Sundance Film Festival for Director Rory Kennedy. Her film Ethel premiered at the festival in 2012 and went on to garner an impressive five Primetime Emmy nominations. But for her Associate Producer, Taylor Johns, it’s not only his first trip to Sundance, but it’s also the first film he’s worked on since graduating and taking a job with Kennedy’s company, Moxie Firecracker Films. In addition to doing some shooting on the film, Johns’ main job was to oversee the archival content, which involved working extensively with Adobe Creative Cloud.

Adobe: Did you always know that you wanted to be a filmmaker?
Johns: I studied both film and pre-med at Pepperdine. I had the opportunity to intern with Rory at Moxie Firecracker Films one summer, and she offered me a job right after I graduated. I had just taken the medical school entrance exam, and I was accepted to medical school but decided to defer for a year to explore a career in filmmaking. It’s been a really great experience, working directly for such a talented documentary filmmaker has taught me a great deal. Now I have to decide if I want to go on to medical school or keep making films.

Adobe: What was the genesis for the film?
Johns: Rory was approached by Mark Samels, the Executive Producer of American Experience, who was interested in developing a story focused on the Americans on the ground during the final days of the Vietnam War. We started doing some research, were immediately interested, and jumped on board. The film doesn’t get into the politics of the war, but instead focuses on the heroic efforts of individuals to evacuate people and save the lives of South Vietnamese citizens. 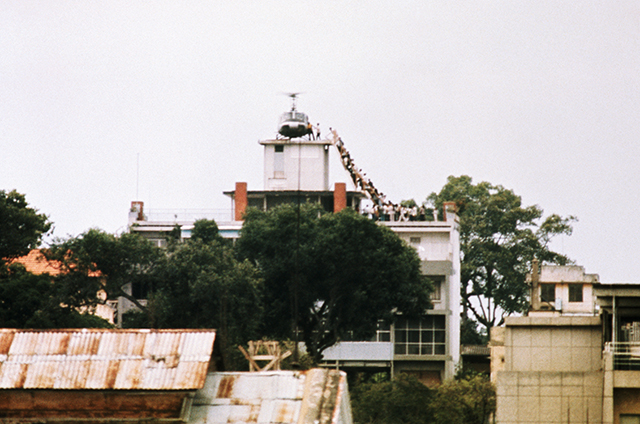 A CIA employee helps Vietnamese evacuees onto an Air America helicopter from the top of 22 Gia Long Street, a half mile from the U.S. Embassy. Credit: Copyright Bettmann/Corbis/AP Images

Adobe: Where did you get the archival content?
Johns: We largely secured the archival footage on our own. We had access to PBS archives from previous documentaries, but that wasn’t all encompassing. There are iconic shots of the Vietnam War, but we wanted to shy away from those so people wouldn’t feel as if they’ve already seen this story. A lot of the archival content came from the characters featured in the film. We also acquired images from Getty, AP, and other news services. As we researched and developed the story, we knew what we needed. There are more than 140 photos included in the film and many weren’t in very good shape.

Adobe: How important was Adobe Photoshop CC to your workflow?
Johns: Photos came from both personal and professional sources, which meant that there was a whole range of quality in the images we used. Some were in perfect condition, some needed major restoration work. The Spot Healing brush and Content-Aware Fill tools in Photoshop would routinely get me 90% of the way to removing scratches and damages on the images. Any document treatment that needed to be done was similarly done in Photoshop. Most of the documents came from original scans, so some existing markings and page tears had to be cleaned up. Once again, the robust Content Aware capabilities in Photoshop again proved to be essential.

We had the text of back channel communications, essentially telegrams that were sent back and forth between Washington and the Embassy in Saigon, but not the original telegrams. I used the custom brushes in Photoshop to create a textured paper background, to apply to the text to give it a more authentic feel. It was so easy to make adjustments to these files and sync them to Creative Cloud so I could work on them from my laptop or my desktop.

We also had a newspaper headline that we wanted to use but the text of the article was oddly spaced and split between pages, as it came from an old scan. It was incredibly easy to apply a paper texture to the background and move the text around so it was inline and looked like a cohesive article. From there, it was even easier to send the PSD file to my Online Editor, Eric Robbins, to apply the necessary camera moves in After Effects to the PSD file. Any changes or revisions I made to my file would then be automatically reflected in After Effects. 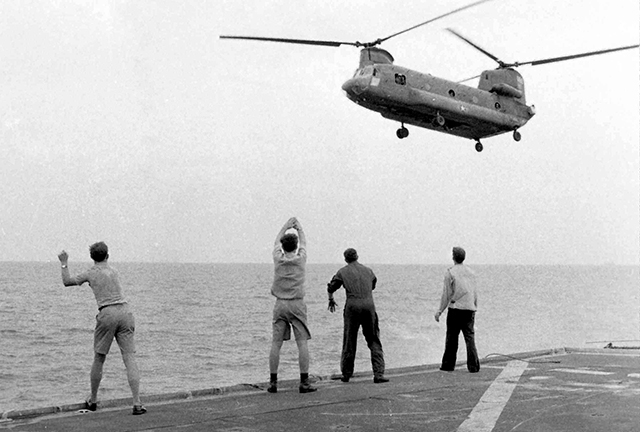 Aboard the USS Kirk, crew members signal the Chinook to hover over their deck and drop its passengers out. Credit: Hugh Doyle

Adobe: What other Creative Cloud tools did you use?
Johns: All of the images needed camera moves applied, such as pushing in or pulling out of a photo. Photoshop and After Effects were ideal because of how well they work together. A photo could be restored in Photoshop, then animated in After Effects. Additional restorations could easily be made as needed, as After Effects natively supports PSD files and allows you to see changes made in Photoshop instantly. This made it quick to integrate last-minute changes into a section of the film, even if the images had not been restored previously. After Effects also scales images quite nicely since it uses the full resolution of an image. A lot of the images weren’t very high res, and we couldn’t have any letter boxing, so we had to push in to fill the whole screen. With After Effects, we could be fairly aggressive with some of the camera moves and not impact the quality of the image.

When I had archival footage screeners that I need to show our editor, I would throw them into Premiere Pro CC and apply whatever effects I needed to make them work for our purposes, mainly simple flips or cropping, with the occasional warp stabilization. I used Premiere Pro CC for this because the clips came from a variety of sources, including some home video footage shot on one of the Navy ships, with a variety of frame rates. In Premiere Pro CC I could have them all on the same timeline without a problem.

Adobe: What do you think of Creative Cloud?
Johns: When Creative Cloud was first announced I wasn’t sure about the model, but now I just love it. I love having access to Typekit, and the ability to sync settings in the cloud and sync important files in the cloud is really great. I love being able to easily download programs when I need them and access new features immediately instead of waiting months for the next major release. I think I’ve experimented with all of the software in Creative Cloud. It’s nice to tread in waters I haven’t previously ventured into.

Adobe: How long did it take to complete the film?
Johns: Rory and I started doing the preliminary research in June 2012 and worked for a year. We took a hiatus over the summer, and then came back in the fall to finish. The online editing for the film took about two months. 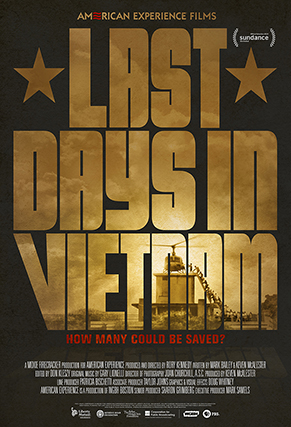 Adobe: What are the plans for Last Days in Vietnam?
Johns: PBS/American Experience owns the film. We’re starting with a premiere at Sundance, and then we hope to continue on the festival circuit. There may also be a theatrical run this year, and then the PBS American Experience broadcast will likely coincide with the 40th anniversary of the evacuation of Saigon in April 2015.

Adobe: What’s next for Moxie Firecracker?
Johns: We’re in the middle of shooting two new projects that are part of a larger, eight part series called MAKERS: Women Who Make America, also for PBS. The series consists of one-hour mini documentaries focused on the women’s movement and women who were pioneers in their specific fields. The two we’re working on are women in politics and women in Hollywood.