Now that Apple has finally joined HP, Dell, MSI, Asus and others as part of the Thunderbolt 3 generation, the time has come to start discussing the devices and interconnectivity that will enable us as we head through the next generation of filmmaking. 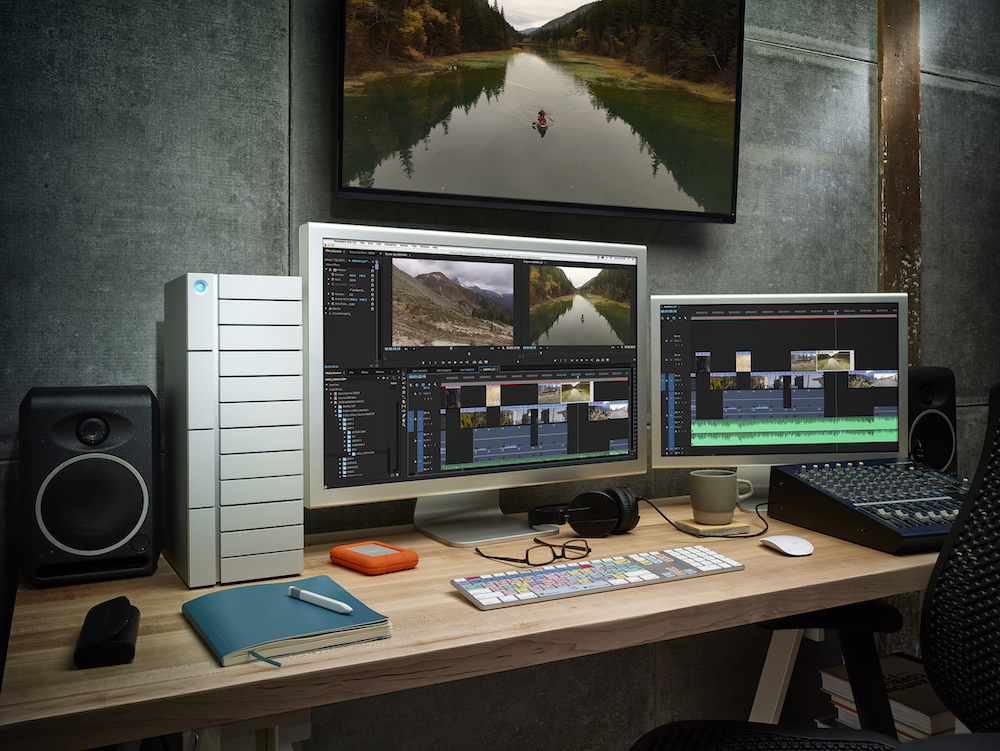 Digital acquisition has changed the imaging landscape, forcing content creators to rely on constantly changing technologies to stay ahead, usually without fully understanding the consequences of the ever changing formats and media types. With the realization that more than 136,000 photos and over 400 hours of video is uploaded to YouTube every minute of every day, maintaining control over your digital assets, the need for both near and long term storage can only grow. Since we can no longer hold an image up to the light to see it, acquiring, storing and archiving your images now and for the future.

LaCie’s line of TB3 products are designed for and around the needs of every type of photographer, graphic artist, filmmaker and content creator. Their products include the stylistic but blazingly fast Bolt© SSD and the workhorse raids of the 6big© and 12big© product line, with a 6bay or 12bay enclosure to house from 24TB up to an astounding 120TB of directly attached, high speed storage on your desk, ready to handle the deluge of data required when working in modern multi-camera production, immersive content for Virtual Reality, as well as for mainstream 4K, HDR and 8K imaging.

The 12big, flagship of LaCie’s Thunderbolt 3 lineup, is designed with filmmakers and content creators in mind. The design nesting an enclosure of 12 disks, dual Thunderbolt 3 ports and one USBc (USB3.2) port and integrated power supply.

The 12big can reach well over 2 Gigabytes per second when the 12 drive unit is configured as Raid 0. Yet surprisingly, the 12big is able to maintain consistent disk write speeds in excess of 1GBps while playback remains at nearly 1.8GBps when the array is setup in in the default Raid 5 configuration, giving the user superior data protection levels, while maintaining full redundancy of your precious data.

LaCie includes their Raid Manager Software to create, manage and maintain the array in a simple but efficient manner. The user interface will direct you through the initialization process, and even though both of the 6big and 12big units ship pre-configured and initialized at the factory, I do not recommend skipping the Raid Manager software installation.

When installing the software package from your array on the installer will confirm that your computers Thunderbolt firmware and bios software are up to date during the initialization of the Raid Manager’s direct access and administrative control of your array. The Raid Manager software allows the user to configure the block and stripe sizes to customize the drives for a variety of data processing tasks, from the small blocks and stripes required for document handling to the larger block and stripe configuration traditionally found to be required in moving the data levels in filmmaking and high end imaging. The maintenance controls handle the normal drive maintenance, repair and rebuilds after a failure and include error notification via text or email to the user or system administrators directly from your unit should there be indication of a drive failure, power outage or other system error that could affect your files.

A Surprise Testing the Raid Configurations

Working with both the 6 bay and the 12 bay big units during this period allowed me the opportunity to test the widest number of drive groupings and overall performance of the units as I tested the various configurations. I was able to test how well the arrays handled large 8K video files to how the same amount of data, in smaller segments, are handled by the varying levels of Raid and Drive configurations.

When creating a Raid Volume (an redundant array of independent disks/drives), there is a simple rule I have always followed, the faster the storage when grouped, the less redundancy you will have against the loss of data on that volume. On volumes of this size, I might generally configure 4 of the 12 disks into a Raid 0 volume for the sheer speed and then group the remaining drives into a Raid 5 or Raid 6 configuration to get the most out of my storage, having part for speed and the remainder retaining full multi-drive redundancy.

Yet when I tried a number of alternate drive and Raid configurations, my read /write results were often mediocre, with some of the configurations performing well below what I have gotten accustomed to with my existing Thunderbolt 2 storage systems. After discussing my “issues” to the management at LaCie, I was setup a call with that would include the product management and leads of the hardware engineering team in France.

What I found out is the LaCie Raid Manager dynamically reads each disks’s volume and level of cache, optimizing in the process of creating a multi-disk configuration, judging performance, cache levels and disk volume, creating an final storage solution. This meant that using the default configuration choices for my 48TB 6big resulted in a 256K stripe size on my MacBookPro while the 96TB 12big chose a 128K stripe. The stripe defaults on my Windows systems were higher at 256K on the 6big and 512K on the 12big.

I also found that using every drive in the enclosure and allowing the software to configure the system using the default Raid level 5 config, the outcome was superior to my modified results nearly every time, a revelation in the facts that my folly in creating separate volumes for speed and redundancy actually gained nothing and reduced my overall performance dramatically from the 1GB (gigabyte) per second writes speed with the ability to playback files at a blazing 1.8GBps, more than enough bandwidth to playback a 10 bit, uncompressed 4Kp60 video stream or up to 6 streams of 4Kp60 ProResHQ.

When LaCie decided on how to design the 12big’s desktop footprint, they wisely looked at the market and how large storage needs have moved away from the dainty requirements of a disk drive that never leaves the confines of your desk once is has been removed from the box.

With a shipping weight of almost 50lb or 22kg a12big unit cannot actually be considered portable the same way LaCie’s “Rugged Drives” are, yet LaCie has focused on making the big series of enclosures reliable for any matter of data workflows, utilizing Seagate’s latest IronWolf Pro HHD’s, the latest in enterprise class hard drives from parent company Western Digital, that include a limited 5 year warranty and 2 years of data recovery, after registering your unit, with each drive.   LaCie’s 12big has been thoughtfully designed to maintain data throughput without sacrificing the level of data redundancy creative professionals require for their direct attached storage, even allowing for the unit to be operated either vertically or horizontally on your desk or cart. For increased mobility, LaCie even offers a heavy duty Pelican© brand shipping case for the 6big and 12big as an accessory, knowing that resourceful filmmakers and photographers will be using these workhorses on the road as much as they will be  used in studio.

When you are working with the set up of hardware arrays like these, you do not have the simple ease of use that you are accustomed to with the smaller Plug & Play storage you are accustomed too. The configuration and initialization process for any large Raided volume takes time and is designed to find and fix errors in the drive media, while the system maps those locations to increase performance and increase data reliability. The initialization process takes a measurable amount of time, with the 120TB version of the array needing between 72-100Hrs of continuous operation to fully accomplish the process. Your storage is accessible during the lengthy initialization and you can safely write new data during the process, but will not be able to operate the drive at full performance levels until initialization is completed.

What about my existing Thunderbolt workflow?

Yes, the Thunderbolt3 connection on the 6big and 12big are fully compatible with your existing Thunderbolt workflow. Apple’s Thunderbolt 3 to Thunderbolt 2 adaptor can be used to allow older laptops, desktops and all-in-one computers direct access to the arrays, allowing users to upgrade to the latest in desktop storage and maintain full connectivity with any legacy hardware in your infrastructure.

Note the Apple Thunderbolt 3 to Thunderbolt 2 Adapter functions bi-directionally and in the same manner on PC’s as it does on the Mac. TB3 adapters are currently available from a wide range of companies on the market and I have found not all of them may work with all devices.  Devices from Lintes, StarTech and Apple are currently at the top of my list of functional adapters as are the Dell and CalDigit docking solutions, mainly because those devices all work the same on both my Mac & Windows computers, diminishing the need for some of the vendor specific solutions being offered.

LaCie’s commitment to building professional level storage solutions has been redefined with the Thunderbolt3 enabled big series. With the economical 6big to the power and sustainability of the 12big, LaCie has leapt to the forefront of the Direct Attached Storage Market for imaging professionals, leveraging Intel’s Thunderbolt for it’s ease of use on both Mac’s and PC’s, enabling everyone from the still photographer cataloging his archive to a filmmaker cutting 1000’s of hours of content into an award winning documentary, with solutions that empower individual creativity in our ever changing media marketplace.

Remember in the ever-changing Thunderbolt 3 landscape, your mileage may vary. Not all computers or logic boards are created equal. Many TB3 solutions are limited due to chipset versions or other decisions made at the manufacturing stage that can drastically reduce your performance, as can your cables. Buy Only Thunderbolt 3 cables that have both the TB “Lightning Bolt” and the #3 printed on them to ensure that your systems able to access the full 40Gbps bandwidth available in Thunderbolt 3.

My only request to LaCie? Next time it would be to make that USBC control port on the back of the big array’s active and functional, not just there to allow a user lackingThunderbolt to control the array. While USB connections limit you to a single volume on the host, and data transfer speeds are limited to no more than 400MB/s, I would still love to be able to hang my shuttle drives off that port when transferring data for dailies while I am onset. 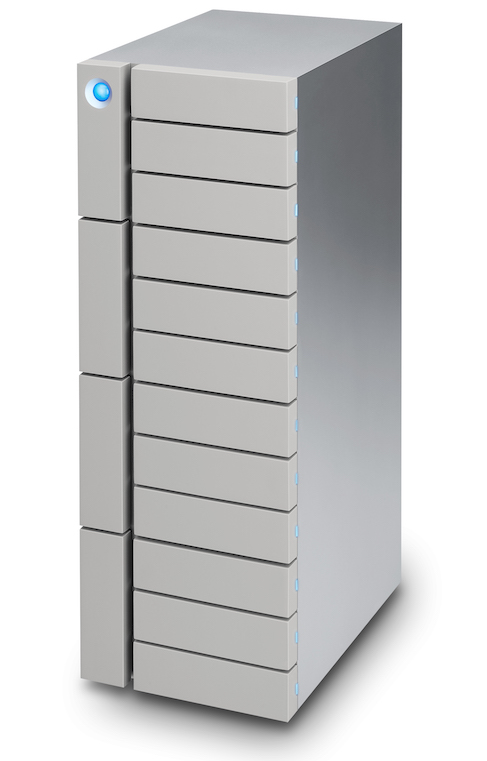