The new FS7 II complements, but does not replace, the original FS7

Sony today announced the PXW-FS7 II, an enhanced version of the FS7 introduced in 2014.

The FS7 II gets the variable ND filter system first seen on the PXW-FS5, a positive-locking E-mount, a better (less floppy, and reversible) EVF mounting system, a tool-less Smart Grip arm extension mechanism, and Rec.2020 color support. Additionally, its XQD cards pop farther out of their slots for easier removal while wearing gloves; the audio control door swings down instead of sideways; the eyepiece loupe has a less fiddly attachment system, with one fixed clip and one latching clip;  a monitor hood is supplied for use when the loupe is removed; and the FS7 II can be used as a platform for updating the firmware in E-mount lenses. 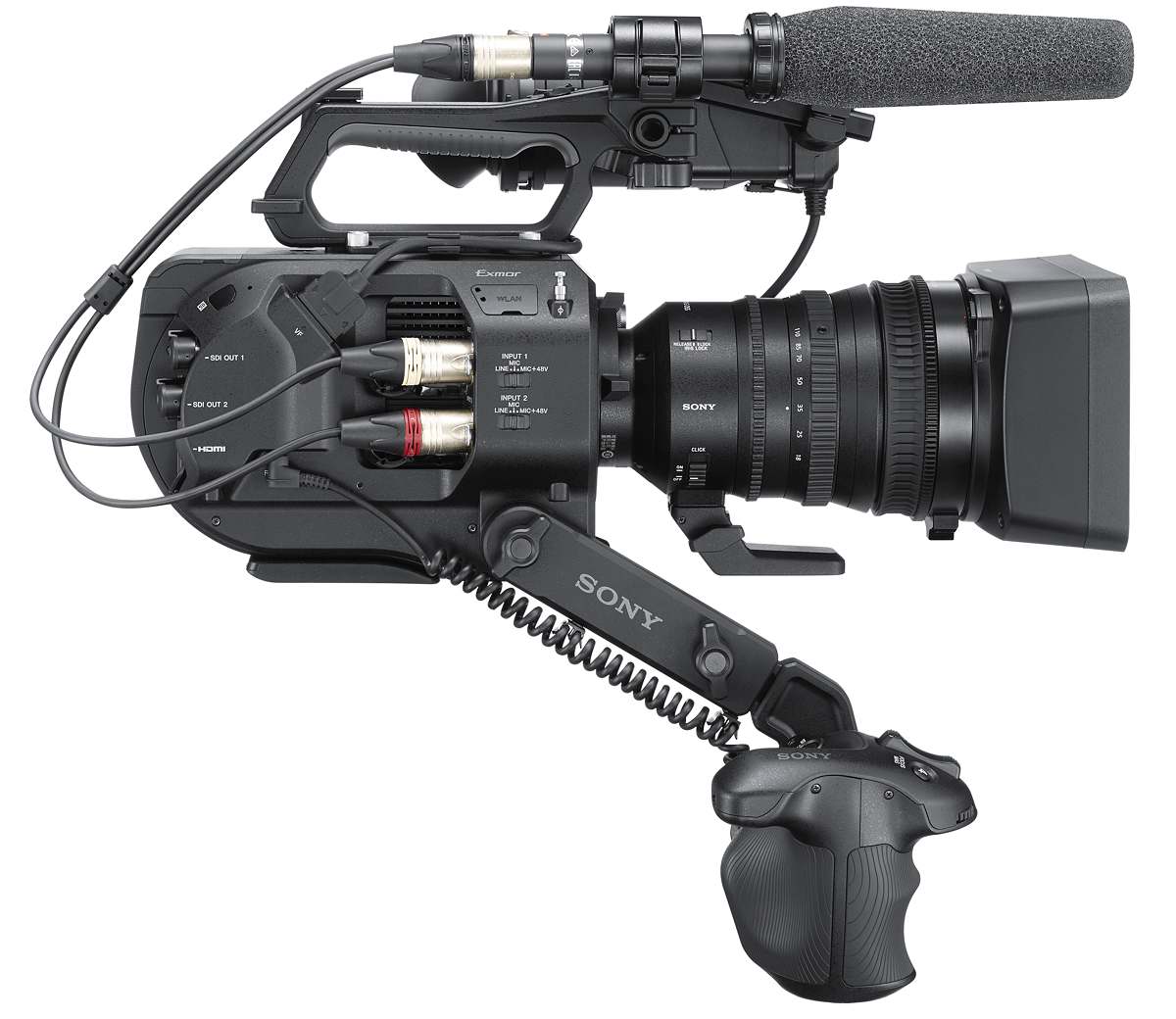 The FS7 II’s kit lens will be the previously announced SEL-P18110G F/4 OSS servo zoom, a $3500 18-100mm, cine/video-optimized lens similar in design and operation to the 28-135mm f/4 released with the original FS7. In other words, it’s the 6.1x, Super35mm-optimized brother of that earlier 4.8x glass, which was an ideal compact zoom for full-frame 35mm but a bit on the long end for APS-C/Super35mm cameras.

In essence, the FS7 II is a “deluxe” version of the FS7 with operational improvements rather than a fundamental redesign.

The lever-driven E-mount works like a PL mount and the locking EF mounts on the Canon C-500 and Panasonic VariCam LT: it rigidly affixes the lens, eliminating the wobble and slop of a bayonet mount.

The variable ND offers 2–7 stops of reduction with either 1/3-stop steps or entirely stepless changes, allowing things like live ND pulls, or setting exactly the aperture you want. Sony’s Juan Martinez points out that it’s great for use with “lenses without practical means of iris control such as DSLR (with coarse iris stepping) lenses and lenses without an iris altogether such as catadioptric, snorkel and periscope lenses.”

The new EVF mounting rig should eliminate the lateral droop the FS7’s EVF is prone to, while also allowing the EVF and mic clamp to be swapped side-to-side. Improved grip arm and EVF loupe clamps are designed to allow faster, fumble-free adjustments and reconfigurations.

In short, these changes address most of the niggling criticisms of the original FS7 while adding new capabilities—via that stepless, variable ND—first seen on the FS5.

The original FS7 remains in the lineup, and is due for a firmware update this month. The two cameras share the same sensor and the same basic image processing and recording capabilities, so FS7s haven’t been obsoleted by the advent of the FS7 II. The FS7 II is a premium product, at a premium price: the camera alone will be just under $10,000, while the camera kit with the 18-100mm will be a bit less than $13,000 (about $500 less than buying lens and camera separately).

Introduced by Sony in 2014, the FS7 has rapidly become one of the most popular production cameras in the industry.

Sony is now expanding its FS series of camcorders by introducing an advanced model, the FS7 II. The original FS7 remains in the lineup as the entry model to this growing family.

Extensive refinements to the viewfinder support system and SmartGrip arm mechanism ensure super-fast and secure “on the run” rig repositioning–all of this while still retaining the Zen-like simplicity, flexibility and operational comfort of the FS7’s “multi-award winning”  industrial design.

Sony’s new mount system securely locks E-mount lenses to the camera body and enables the use of larger, heavier lenses without need for additional support. 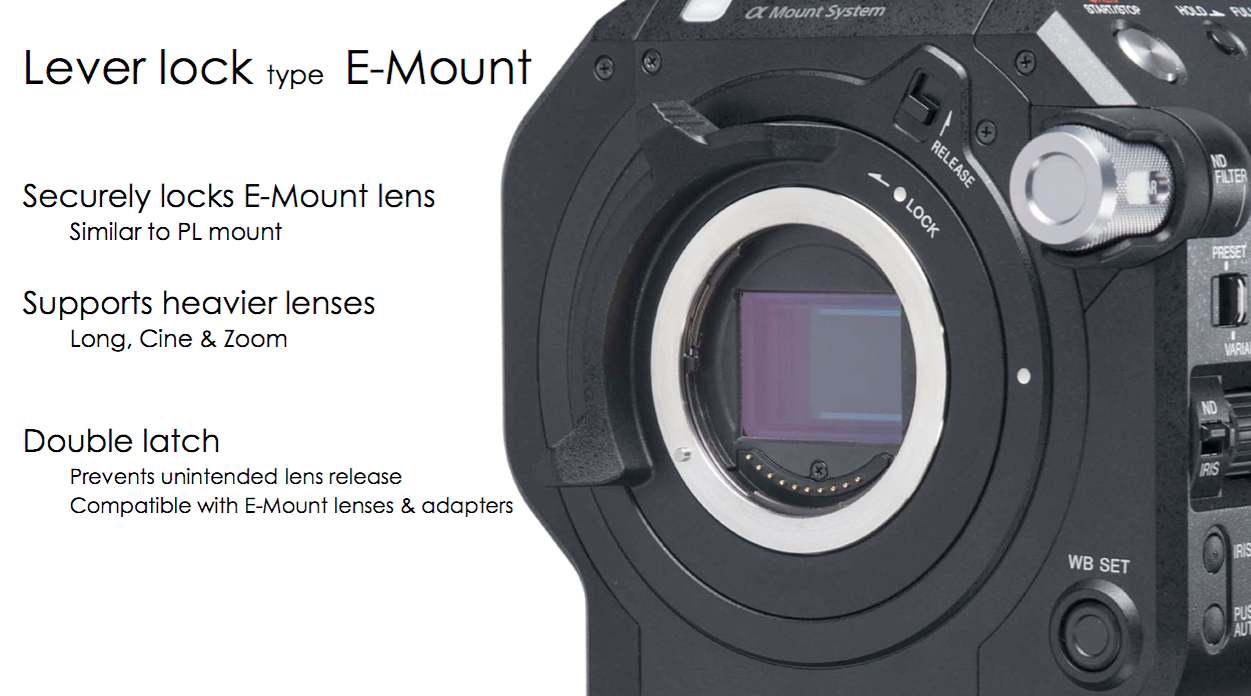 This breakthrough is based on a clever combination of advanced material science and ingenious engineering. The Lever-Lock Type E-Mount securely holds E-Mount lenses and adapters to the camera body. In fact, it can hold unsupported: Long, cine and zoom lenses of similar weight to unsupported PL-Mount lenses on the F55 (under static and dynamic loading).

Place the E-Mount lens in the Lever Lock Type E-Mount opening and then, with your free hand, rotate the locking ring in a counterclockwise direction. This securely clamps the E-Mount lens in the mount. When the ring comes to a stop, a secondary latch automatically locks the ring in place to prevent unintentional disengagement. To disconnect the lens, switch off the secondary latch, then rotate the locking ring in the clockwise direction to release the lens.

All the usual benefits of the E-Mount are retained.

Variable ND frees the lens iris from the traditional job of exposure control. With Variable ND, the lens iris can be dedicated instead to the important job of setting depth-of-field. In documentary field work, bright exteriors and dim interiors no longer need automatically result in distracting variations in depth-of-field.

Variable ND also permits any lens to be used consistently at its “sweet spot,” within its best f-stop or T-stop range (peak optical performance for that particular lens). In so doing, Variable ND avoids the image degradation and softening that typically accompanies opening or closing the lens iris too much.

The ND turret knob enables four presets for ND attenuation. The first preset is “clear,” in other words, no ND. That leaves three preset settings, which are user-selectable in 1/3 stop steps within the camera’s 2 to 7 stop range.

For example, each of the three user-selectable ND presets might be set to a desired ND density for each of three particular scenes, which, in combination with iris settings, could give each scene a particular look with regard to depth-of-field.

This mode is ideal for “run and gun shooting.” The operator can manually adjust exposure by turning either a knurled wheel near the front of the camera or an index-finger wheel on the SmartGrip. In either case, the result is a smooth, seamless adjustment of exposure within a 2 to 7 stop attenuation range. Both control wheels can be user-assigned to control ND density–or one of them can be reassigned to adjust audio level or lens iris.

Auto ND can entirely replace the Auto Iris function, without any of the aforementioned optical aberrations or degradations caused by changes of iris aperture. Auto ND will prove incredibly useful to a single-person crew shooting nature or conducting interviews outside while the sun comes in and out from behind the clouds. Another critical new use of Auto Variable ND will be for shooting time-lapse of sunsets and sunrises, to ensure a steadily compensating exposure where desired.

Note that any of the 10 assignable buttons on the FS7 II can be assigned to toggle “Auto ND” on/off. This function could be used, for instance, to let the FS7 II quickly establish a ballpark exposure setting, which could then be manually trimmed to taste.

Lastly, the FS7 II’s new Variable ND feature encourages the use of any lens not commonly used in hand-held vérité documentary filmmaking due to the challenges of manually changing exposure while following the action. This particularly applies to older DSLR lenses for which active E-Mount adapters exist. Given their DSLR heritage, their iris aperture often changes in coarse 1/3 stop steps only.

Buttons and controls are placed at intuitive locations for easy access while shooting. The operator side of the camera now also includes all the necessary controls for operating the new Variable ND feature. And the number of assignable buttons has increased from six to ten.

The viewfinder is the most important camera-operator interface, used for framing every shot. The viewfinder eyepiece, when in use, also provides a contact point for stabilizing the camera while shooting handheld.

Another FS7 II viewfinder bracket innovation is use of square rods which retain LCD horizontal alignment.

Attaching the eyepiece to the FS7 II’s LCD is simpler and easier. The FS7’s eyepiece top latch is replaced by a fixed rectangular steel loop that instantly hooks the eyepiece flush and level, perfectly aligned to the LCD; just secure the bottom latch and you’re good to go.

The FS7 II’s eyepiece uses an industry-standard 52mm diopter. By removing the rubber eyecup, the original diopter is easily switched out for a diopter matching the operator’s eyeglass prescription. This is a common request of many experienced camera operators.

The FS7 II introduces a collapsible LCD hood for viewing the LCD without the eyepiece.

The FS7 II’s mic holder is no longer permanently attached to the end of the short 15mm rod that acts as a cross bar to join the viewfinder support bracket and the mic holder to the front of the handle.  The mic holder’s lever clamp now enables removing, reorienting, or relocating the mic holder.

Furthermore, this short 15mm rod can now be replaced for a longer one that enables relocating the viewfinder eyepiece further out for “left eye dominant” operators.

Another benefit of the FS7 II mic holder removable clamping system is that the viewfinder and mic holder can be transposed in seconds to the opposite side. 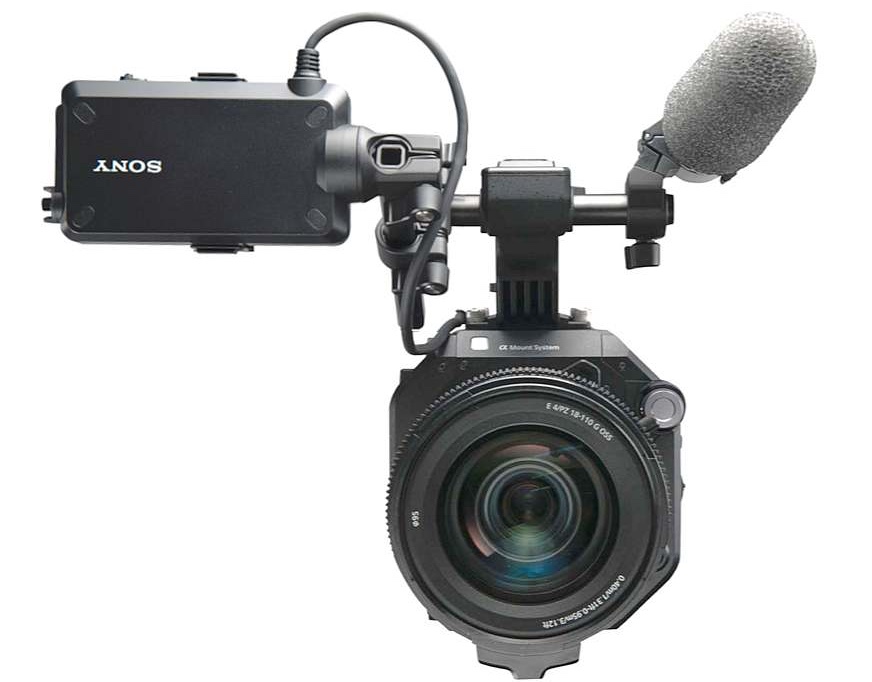 This enables the operator to comfortably shoot from the camera’s right side.  This feature is often requested by experienced 16mm camera operators who once enjoyed the same flexibility from their Aatons and ARRI SRs.

The length of the FS7 II’s SmartGrip can be changed without any tools. The new design uses knobs contoured to facilitate locking and loosening by hand, even when wearing gloves. Furthermore, the new design enables relocating the SmartGrip to a new position, closer to the camera body. This makes it easier to hold the FS7 II against the chest or underarm to permit shooting more comfortably, from more angles.

XQD cards now project twice as much from their slots in order to facilitate card changeover, even while wearing gloves.

The FS7 II is built upon the proven FS7 platform. The sensor, ISO sensitivity, and colorimetry specifications carry over.

The SEL-P18110G is compact and lightweight -2.4lbs – with a tough magnesium-alloy metal body and a highly practical 18 to 110mm focal range (6.1x zoom). Its wide zoom range and close minimum object distance enables following of the action from up close or far away; an extremely useful feature for Cinéma Vérité style filmmaking

Discrete Iris, Zoom & Focus rings with markings on the barrel.

The push-pull focus ring seamlessly switches between auto and manual without removing your hand from the lens barrel.

The mechanical zoom ring has a predictable linear response; is fully capable of snap zooms and is entirely devoid of lag. The direction of the zoom ring rotation is reversible.

The supplied Sunshade has a built-in louver style lens cap mechanism. A traditional circular cap is also supplied for use when the louver sunshade is not used.

Full lens metadata transfer to the camera for display on the VF and real-time recording onto the file (Sony formats only).

All images courtesy of Sony.