One year ago, the world changed, abruptly, and the industry of moving images came to a halt. Cinematographers had to learn, rather quickly, to cope with the new rules and challenges. 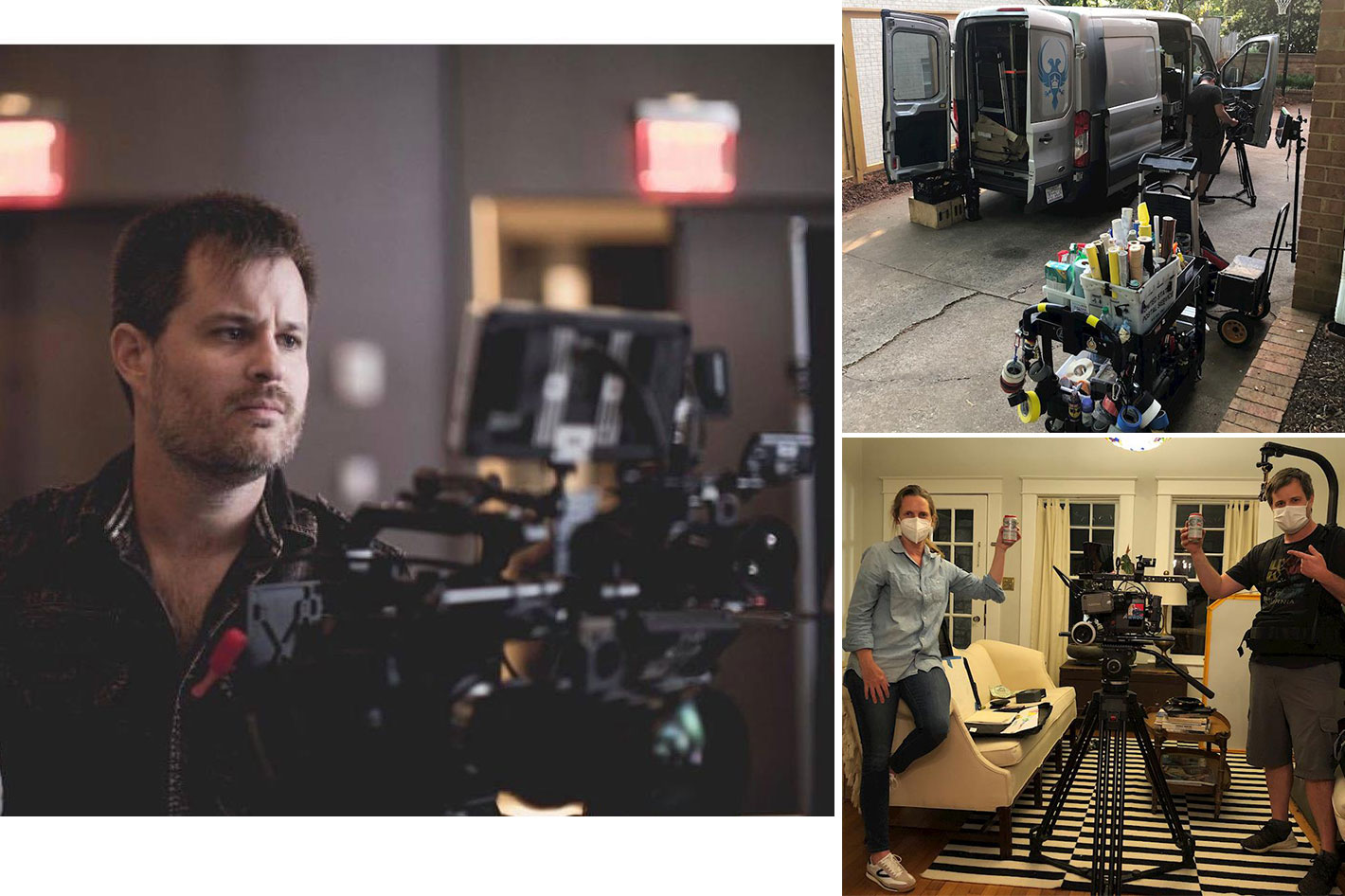 Award-winning cinematographer Joshua Ausley looks back at a year where smaller, agile crews became the rule, and looks at the future, while sharing his experience with Cartoni tripods.

Last March (2020, that is!), the Los Angeles area, one of the sparkling gems of the Hollywood entertainment empire, joined the rest of the world when the pandemic forced everyone in the region to stay-at-home. The stay-at-home order and subsequent industry shutdown sent the entire production world into a tailspin. Film crews were sent home, and many independent cinematographers faced an uncertain future.

It is estimated that in the Los Angeles area only. nearly one million jobs were lost. Award-winning cinematographer Joshua Ausley, who splits his time between Los Angeles and Atlanta, is in a good position to look back at a year of production during the pandemic. Ausley has worked on feature films and projects for Marvel, HBO, and Netflix, among others. Joshua Ausley takes a look back at the year, his thoughts on the future, and shares his experience using Cartoni tripods. 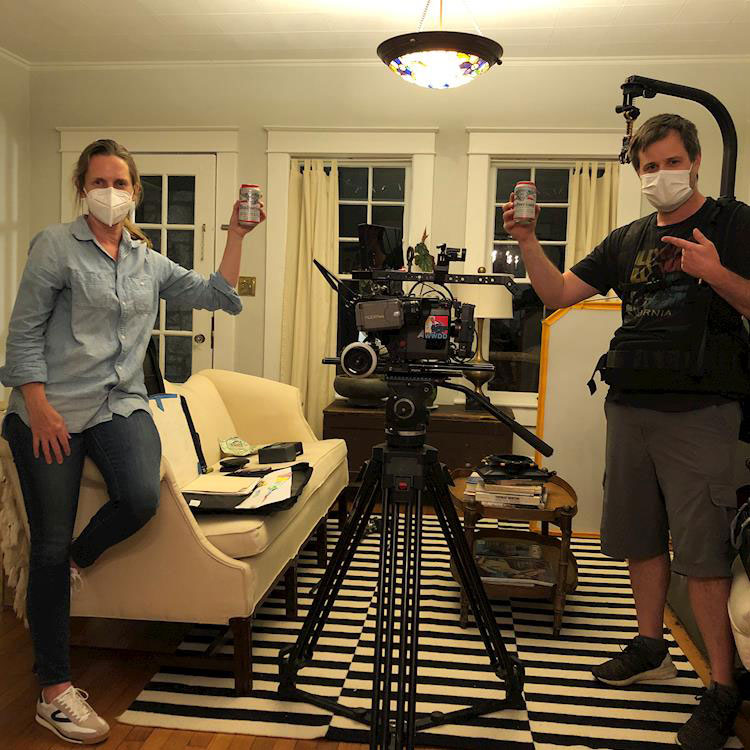 The interview with Joshua Ausley

Here is the complete interview with cinematographer Joshua Ausley, taking us behind the scenes of some of his most recent work.

Film and video production is finally ramping back up following COVID and staying at home orders, but you have been pretty busy. Can you tell me about some of the projects you have been working on?

I shot a commercial for XFINITY, followed by a documentary feature that involved a lot of time on the road. Virtually everything has been remote to client, meaning the agency and producers stay at home in LA or the UK (or wherever they are) and view or direct the shoot via streaming services.

Diversification has been the key to keep the work flowing. When the usual commercial jobs dried up, we were able to quickly pivot and start doing remote shoots, such as TV documentaries, to help us get by until things ramped back up.

One of your early pandemic shoots was the Budweiser Memorial Day “Take Two-Minutes” commercial. What was it like working on that commercial at the height of the pandemic?

We were approached by the agency, DAVID, to be part of a multi-city campaign honoring both veterans and frontline healthcare workers for a Memorial Day spot by Budweiser. The various locations would have needed different crews since travel was restricted. However, as the course of the creative changed, we had the opportunity to produce the whole spot ourselves. I brought on an experienced producer, Liz Stovall of Fenton Pictures, to help me make the commercial so I could focus on directing the photography. The spot tells the story of a military service member and a medical worker, juxtaposing them by shooting parallel scenes that were then shown in a split-screen fashion.

We had less than a week to put it together, which included sourcing talent and locations. Keeping everything small due to Covid at the agency’s request, we assembled a lean team of less than ten and shot everything in one day. The spot was on the air less than a week later!

Can you explain how this experience was different than a typical production?

This shoot was right as the pandemic was ramping up here in the US. At the time, there were a lot of unknowns and no widely accepted protocol, so we had to do everything we could [to stay safe]. All crew members wore PPE and stayed six feet apart at all times. Temperature checks were done in the morning.  Lunch was taken outside and separated with individually-boxed items.

This was slightly before real-time Zoom feedback became the norm. As a result, we sent photos and screenshots back to the client to get their feedback and approval. And we still had to work fast! 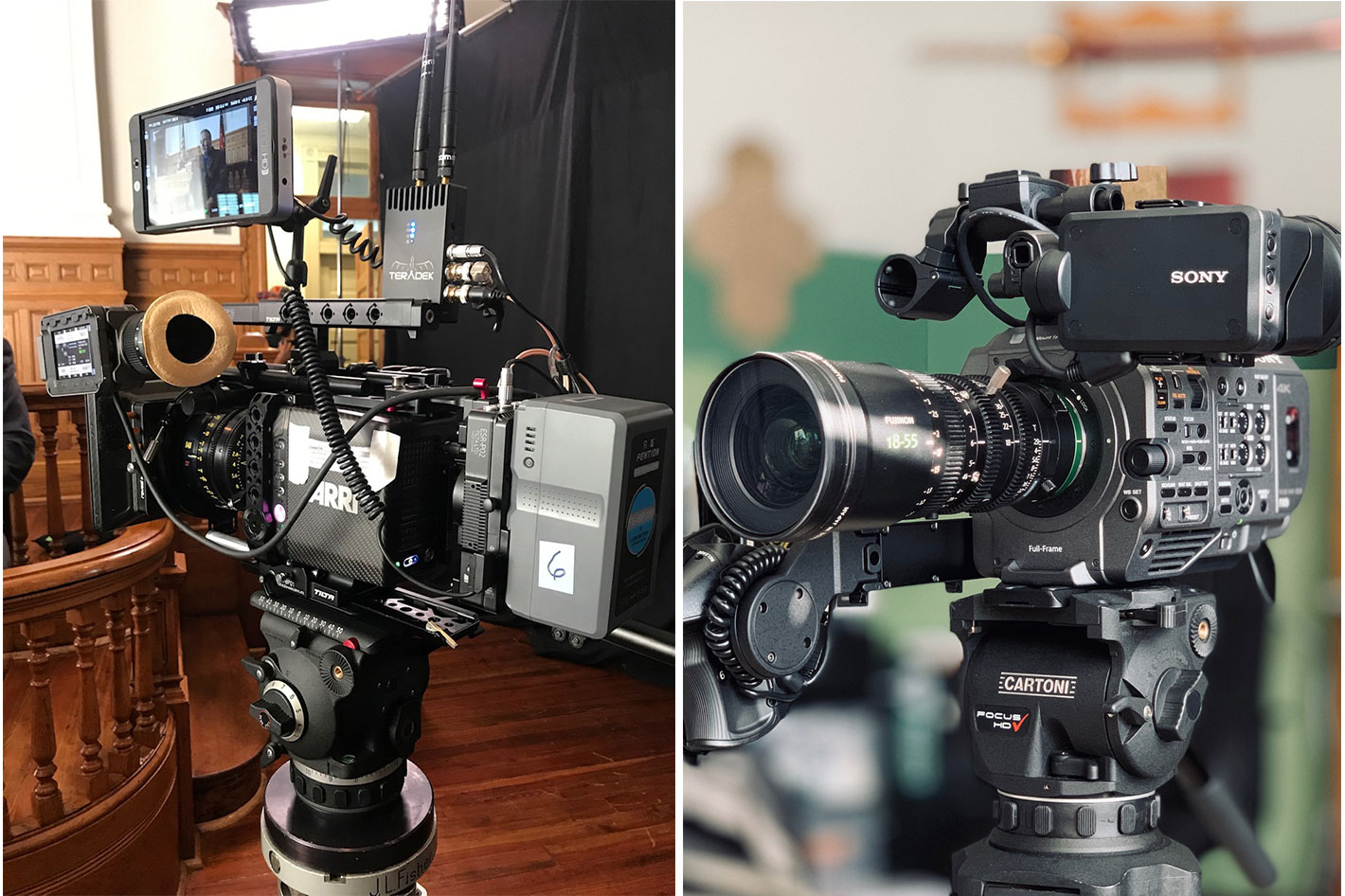 Can you talk about the gear you used for the shoot?

We shot on my Arri Alexa Mini, paired with Zeiss mk3 Super Speeds. For support, we used my Focus 22 Cartoni tripod and an EasyRig for handheld shots. I had to pull my focus since I didn’t have a 1st AC for the shoot.

Because the crew was minimal, we used a lean lighting package consisting mainly of an 800-watt Joker HMI, a Litepanels Gemini panel, and a pair of Kino Flo Select 30 LEDs.

With a smaller crew, how important was it to have a small, lightweight, reliable fluid head like your Cartoni?

Smaller crews mean fewer hands to help move gear. People are wearing multiple hats now, and the heavier the gear, the slower you can move. Having a lightweight tripod head helped me tremendously as I didn’t have an AC for the shoot. I was able to pick up the sticks and the camera all at once to move between setups and make small adjustments to the camera position as needed.

Have you worked on any other shoots during the pandemic (you were in Mexico recently for a shoot, too, right?)

I just got back from Cancun filming for several all-inclusive resorts to showcase their COVID-safety procedures and convince people to come back. The travel industry is probably the hardest hit of all during this pandemic, as my wife knows especially well since she is a travel professional. But there are still some places that Americans can go to. For this shoot, I brought my Sony FX9 with Focus HD Cartoni tripod system, an even lighter package that enabled me to be super mobile. The Focus HD is the perfect size, and weight to use with the FX9 and makes lean shooting a whole lot easier. 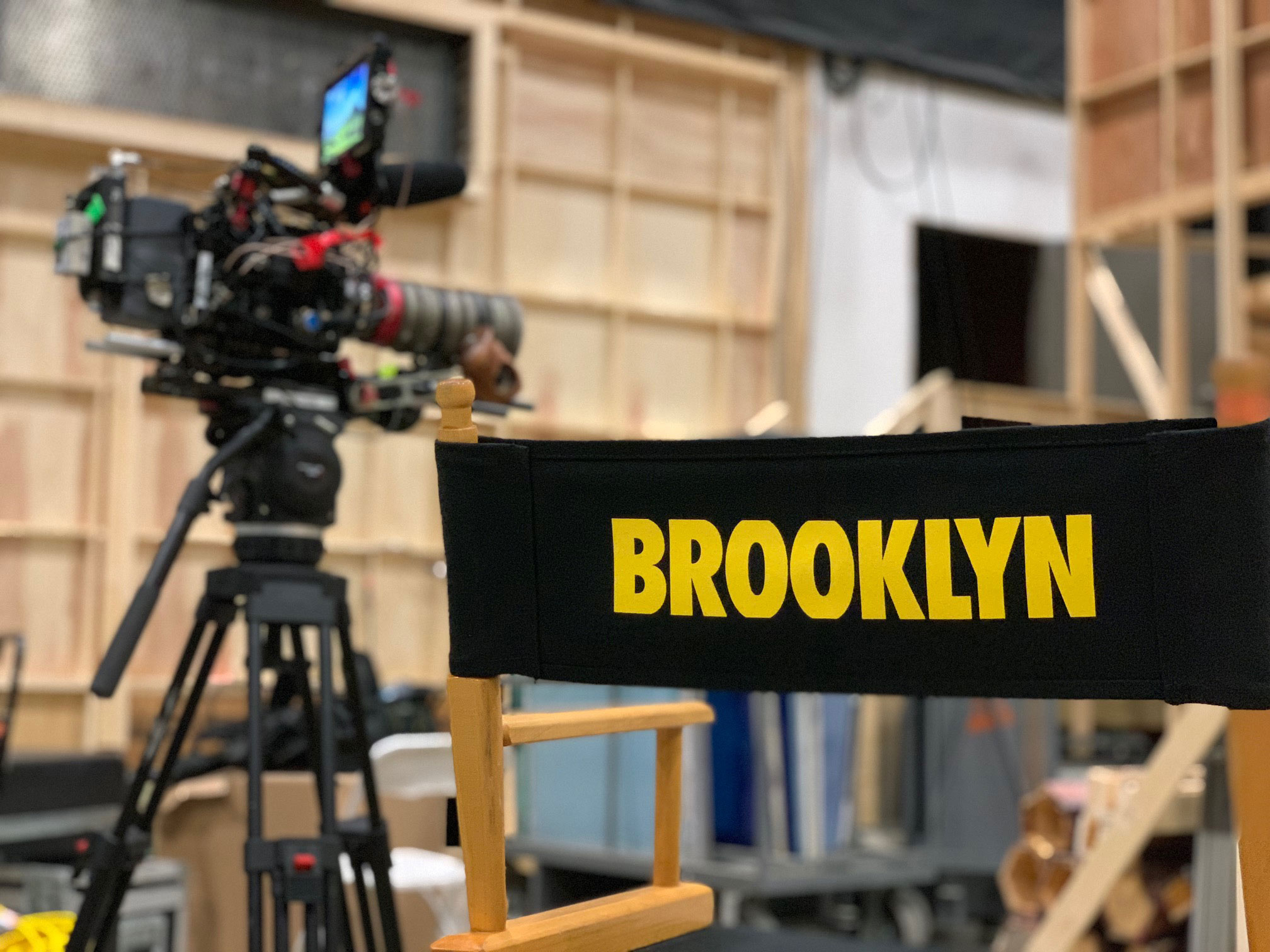 How do you think the pandemic will change production?

In the short-term, it’s clear that we will be wearing PPE, getting temperature checks, and regular testing on longer shows. Some productions are putting crews into quarantine before starting, especially in other countries. Remote productions are huge right now, with clients logging into the shoot from their homes or offices.

I think we’ll see some long-term changes from this, even after the pandemic has passed. Like many businesses now have a more favorable view on working from home, I think clients will realize more and more that they don’t have to fly in a lot of people for productions. Remote shoots will probably stay popular, to save productions on time, personnel, and travel costs. The downside of this is that it takes longer to get client feedback and approval, so that effect will have to weighed.

We definitely need to be adaptable moving forward in 2021. 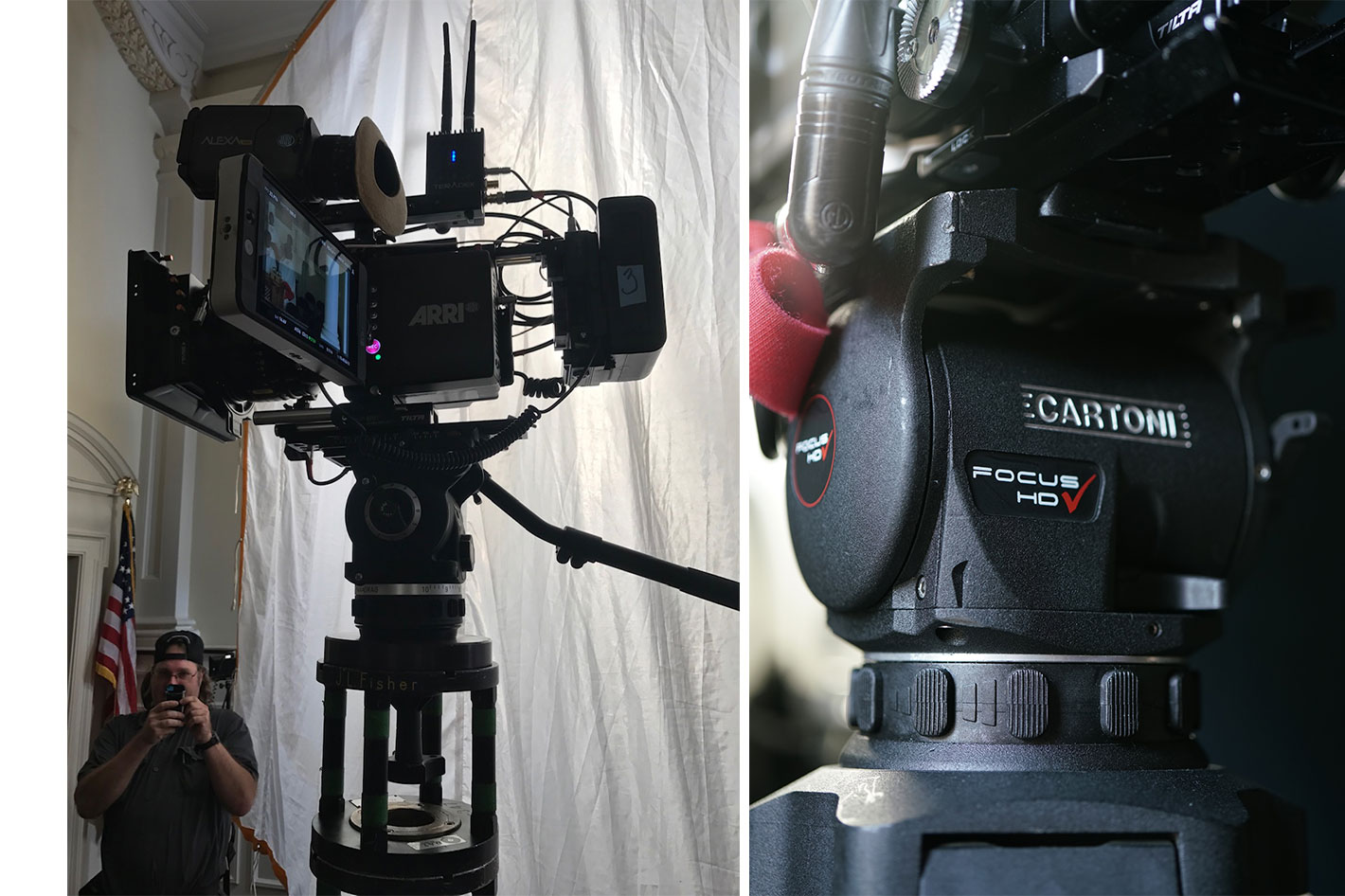 How long have you been using Cartoni?

I bought my first Cartoni tripod in 2016 through a trade-up program switching from another manufacturer. I immediately noticed it was a big upgrade for me. I had tried many different systems out, but the Cartoni package hit all the points without compromising anything. A strong, durable system that can put up with a beating and a fluid head capable of adapting to the weight of many different cameras. I’ve shot four features with it and traveled with it extensively. It holds up very well.

Which fluid head do you own?

I own the Focus 22 head as well as the Focus HD. It’s great to have both a very lightweight package and one that can handle serious loads. Those two can handle whatever gets thrown at them!