If you watched the Apple launch event for the Mac Studio or saw some of the presentation slides, you’d certainly be forgiven for thinking that yes, the tiny little silver box is a PC killer, and quieter, smaller and more energy efficient to boot. I thought I’d take a bit of time to look into this claim, focusing mainly on Adobe Premiere Pro as that is what I use most in the day to day.

You can find a few head to head comparisons on YouTube which are interesting to watch, but coming from a scientific background, I’m much more interested in hard data.

Deep dive into the data

Thankfully, we have an excellent resource in the publicly available database of PugetBench results – populated by Apple and PC users round the world every time they run the benchmark. It is so valuable because it is a standardized test, with each user putting their machine through exactly the same everyday tasks, like playback and export, with multiple codec types. As Puget don’t tend to test Macs as they don’t sell them, I took the time to search the database myself and put together some results.

My method was to find the average of 10 results for each configuration. 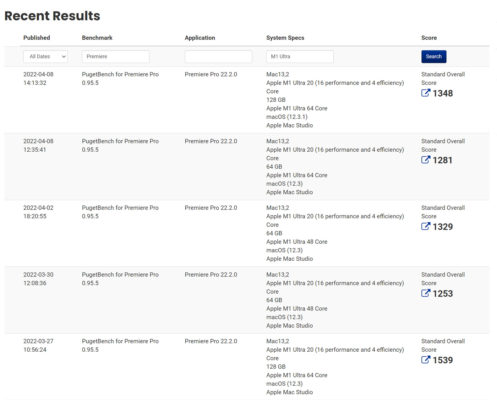 I found scores for three configurations of Mac Studio:

I compared those numbers to seven common PC configurations – here I’m focusing on the CPU and GPU pairing, as that pretty much defines the score as long as you follow best practice for the rest of the PC. To give the PC a fighting chance I mainly looked at Intel and Nvidia pairings as those score higher (see the Intel vs AMD CPU tests and the Nvidia vs AMD GPU tests). Nvidia has been ahead of AMD for a long time, with CUDA performing much better in apps like Premiere and with the release of the 12th gen Intel Core series, there was a big leap ahead in scores, due to how Premiere leverages the built in Quick Sync H.264/H.265 hardware encoding/decoding alongside the GPU.

It’s worth noting though, that not all types of H.264/H.265 are supported and a lot of cameras from the likes of Sony, Canon and Panasonic record 10bit 4:2:2 AVC (H.264) which is not supported and therefore can only use the brute force of the CPU (which is where proxies come in). Oh and another thing, the letters at the end of Intel chips are important – don’t buy the 12900KF (F means no integrated GPU and no Quick Sync).

Pricing these systems is more complicated, as it depends on whether you build it yourself or whether you buy a pre-built system. I priced these the DIY route on pcpartpicker.com, making sure I used components which were common & well reviewed and looking up the GPU prices myself on NewEgg so they were genuine in stock items (and thankfully GPU’s are finally back in stock with prices coming down each week).

A scatter graph is useful to plot the scores vs price:

My initial conclusions are as follows:

A custom built PC with a 12900K + 3080Ti combo can be bought for around $3100 and performs similarly to the highest spec Mac Studio which costs around $5000. It’s also much easier to add in more components like additional NVMe SSD’s or an additional GPU or more RAM at a later date. That said, delving a bit further into the raw numbers in the database, if you look at the scores for the more CPU heavy tasks, like CPU effects or dealing with RED footage, the M1 Ultra is quite a bit ahead of the 12900K (and this is supported by its much higher Geekbench multicore score). So for some people who can really max it out, that will affect its value to them.

This analysis shows that the base model Mac Studio ($1999) – even though it doesn’t have the hyped M1 Ultra chip – is excellent value, outperforming a similarly priced 12700K + 3070 combo (and destroying any AMD Ryzen combo’s).

This is all assuming you are happy to build your own PC (for which by the way I wrote a full guide). If you look at pre-built PC’s from the likes of NewEgg or CyberPowerPC, the situation changes. I found that there is about a 15-30% premium when you have to buy the PC from a supplier. With these prices, a 12900K + 3080Ti combo still beats the M1 Ultra Mac Studio, but not by as much. And the base M1 Max Mac Studio is now exceptional value.

So is the Mac Studio a PC killer?

Yes and No. If you care about size, noise, looks, your electricity bill, being on MacOS… then absolutely. If you don’t care about any of those, then no, not really, especially now the GPU crisis looks to be finally over. Plus there are still some teething problems with Premiere and the M1 chips, though I’m sure these won’t last long. The base model Mac Studio does bring fantastic performance at its price point, but the more expensive M1 Ultra models fall behind PC performance.