Is it the tool, or something inside? – Knowledge Jolt with Jack. 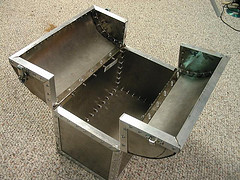 Mark McDonald asksHow do you know that you need a wiki?. But then he talks about a lot more than that. It’s not just the tool you might need. If your organization doesn’t have the context for the tool, it won’t matter if it is the “perfect” tool for the job. Mark’s closing:

Too many people think of a wiki as another knowledge management tool. Knowledge management tools are something separate from your day to day workflow. That attitude will need to change along with the technology that integrates wiki technology into the workflow in order to have people say ‘put it up on the wiki’ rather than inventing an ad hoc process that takes time, resources and puts bottlenecks in the flow of information.

Tool vs. Process. I have fought this same battle many times – most often with myself, just as described in Mark’s story. There have been many times where I want to suggest that people use tools that would make a given job much easier, but it doesn’t make sense in a given organization. It’s not the tool so much as it is the way people in the organization already work. In some cases, they already have the tools: their perception is that they are only good for job X, and I was suggesting job Y (and Z). Hammers are only good for pounding nails! That claw thing on the back must be a vestigial remnant of an earlier tool that doesn’t have any real use.