Back in April the Indy Racing League took their cars to the beautiful Barber Motorsports Park in Birmingham Alabama. It wasn’t an actual race but rather an open test, meaning teams could run throughout the weekend and tweak their cars until their heart’s content. It was the only road course that the IRL was testing on this season and from reports around the Internet the league was very happy with the fan support as there was a huge turnout, especially for a test. The hope is that the IRL will return to the track for a fully sanctioned race very soon. A test day is great in that for a small fee you can get up close to the action around the track and in the pits. I took my trusty Canon HV20 and the GT35pro lens adapter and head down for a day of shooting Indy cars. 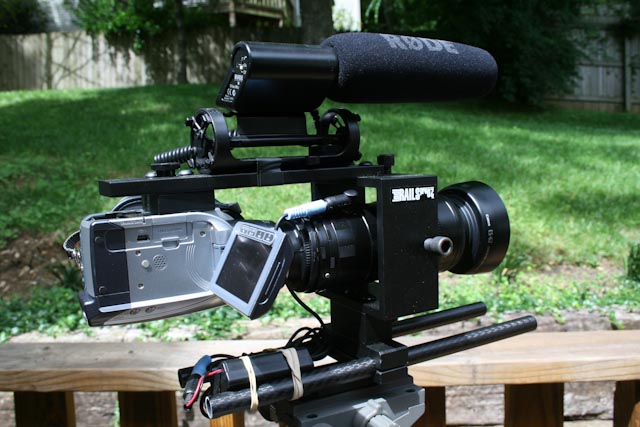 The rig I’ve dubbed the 20GT

This particular outing with the camera that I’ve dubbed the “20GT” included a new piece of gear that made quite a difference when shooting. I purchased an indieRAILSpro20 support system from IndiSYSTEM. Also known as the Shrigg Rig this piece of gear is a mounting unit for small cameras like the HV20 when using a 35mm lens adapter. It mounts the camera upside down and provides a sturdy support enclosure for the lens adapter. It’s great as is when using a prime lens like my Canon 50mm. The Shrigg Rig also comes with a set of carbon fiber rails that could be used for supporting a number of other items like a follow focus and matte box. At $109 it’s quite the value.

The Shrigg Rig provides a very sturdy platform for mounting everything in this particular setup. It’s a bit heavy when all parts are attached but I’d rather have a meaty rig in my hand than one that was flimsy. There’s 4 rubber-tipped adjustment screws that hold the lens adapter in place as it pokes through the unit: 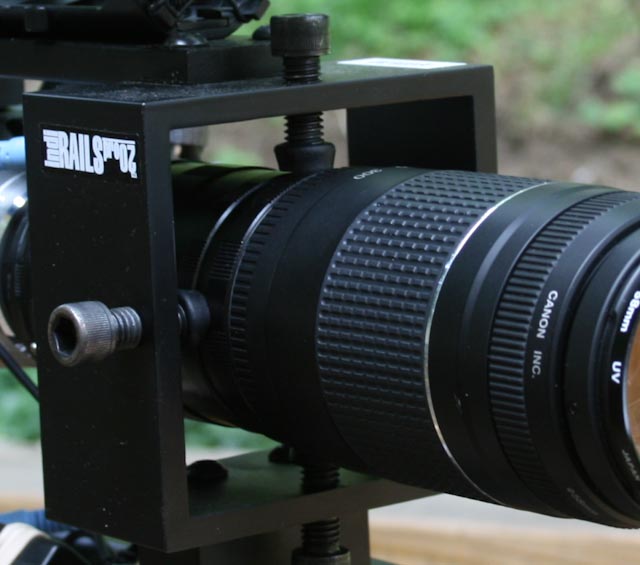 There’s several screw holes on top where you could get a mounting screw to attach a microphone, cold shoe or any number of accessories. I didn’t have said screw as I packed for the shoot the night before so I used tape. The rig also obscured the attachment hole for the power cable (it uses a mini audio plug) to the vibration motor but an elbow from Radio Shack cured that: 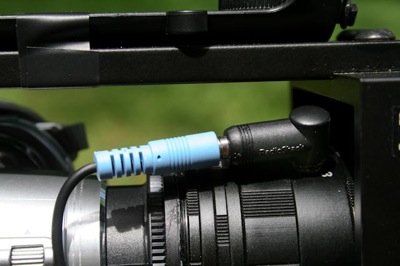 Since 35mm lens adapters flip the image upside down (unless you have a high end unit that turns it rightside up) mounting the camera itself upside down will then capture a properly oriented image. That means you don’t have to go thorough the steps of flipping the image in post … a nice thing to not have to worry about. The other big pain in the ass of shooting with an adapter is the image in your viewfinder or flip out video screen is also upside down. Not the easiest to work with when panning, tilting and trying to compose a shot. I had assumed that mounting the HV20 upside down would also mean the LCD would be upside down as well … but it’s not. The LCD always orients itself the same way. I don’t understand why this happens so if someone has a better understand of how the flip-out LCD works then please comment below! One out of two ain’t bad so at least I don’t have to flip in post anymore.

While a large part of the day was spent shooting with the 50mm lens I did something that is kind of a no no with 35mm adapters like the GT35pro. I had no press pass so I couldn’t get very close to the track so I slapped my 300mm Canon zoom on to the lens adapter and shot with it as well. With this lens on and the zoom extended full it’s quite a long rig: 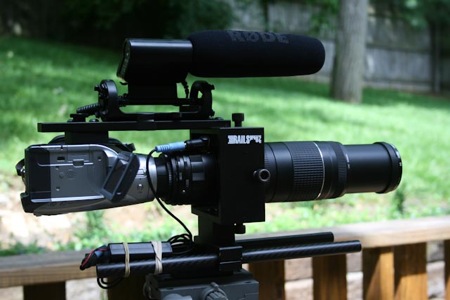 I say it’s a no no because with a really long lens like that the first thing you notice is the texture of the ground glass. That texture becomes very evident the more you move to full zoom. And using a long zoom lens with an adapter like the GT35pro will also magnify any dirt or hair that might be on the ground glass which would not be noticeable on a shorter lens, especially with the vibration turned on. Plus you can see a lot more camera shake the more you zoom in. There is also noticeable softening around the edge of the frame on the long end of the zoom. While that’s probably not desirable in most situations it actually kind of worked here and produced a nice tilt-shift effect. There’s not much color correction in the edit above, just lightening of a few shots here and there.

What can you do about this noticeable texture of the ground glass when using a zoom lens? Well the first thing you can do is don’t forget to turn on the motor for the vibration of the glass like I did several times! That’s part of the whole point of having a spinning or vibration type adapter. The movement on the ground glass helps to hide the texture as well as any dirt particles that may have collected on it. Newer versions of the GT35pro have a tally light that shows if the unit is on or off. A huge plus. Another things is to add noise reduction.

While noise reduction can often be a God-send in certain situations it does reduce the overall sharpness of an image. In the case of my little Indy car shoot it was acceptable to me and helped reduce the texture left behind when working at the long end of the zoom lens. I used a pretty aggressive setting in the Noise Reduction plug-in of Magic Bullet Steady. I didn’t do a lot of experimenting with the different setting nor did I try any other noise reduction plug-ins. It’ll be interesting to see how much sharper I can make the image while still reducing the texture with more tweaking. 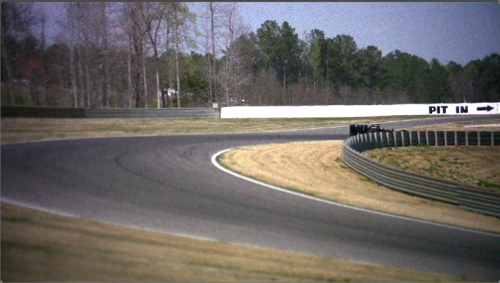 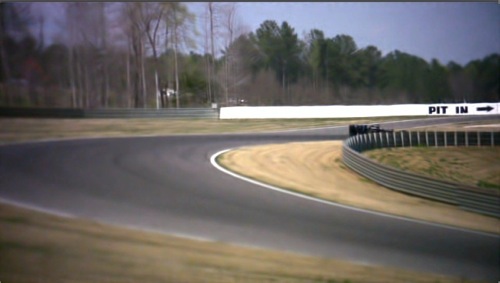 And speaking of sharpness … the most difficult thing of all when shooting with the 20GT rig is keeping focus. In fact that’s probably the most difficult thing when shooting with 35mm lens adapters in general. I did a shoot recently with a Letus Extreme mounted on a Panasonic HPX170 and it has an amazingly handy focus assist feature with a little histogram-type display and a focusing bar that both work when using an adapter. They make it much easier to nail good focus in HD. With the HV20 there is only a focus assist function that magnifies the center of the image and while that helps it is still hard to get it just right, especially when using a long zoom lens. To make matters worse I was shooting out in bright, direct sunlight. Thank goodness for the Hoodman!

It was great fun hanging out at Barber Motorsports Park and shooting the Indy car practice. Let’s hope next year I can go back for the actual race that they might have on the 2010 schedule. In the meantime tune in to the Indy 500 this Sunday!