Streamline your workflow with industry-leading integration

This month at IBC 2014 in Amsterdam, Adobe will preview next updates coming soon to the Creative Cloud video applications. In a fast-moving industry, video pros need tools that keep them ahead of the curve, allowing them to work confidently with the latest hardware and camera formats. With regular updates, Creative Cloud meets that need, making everyday tasks faster and easier – and opening new creative possibilities with a little more Adobe magic.

• Powerful media and project management—Take control of large projects with new features like Search bins, Consolidate & Transcode, and Multi-project workflows in Premiere Pro.
• Support for cutting-edge technologies—Focus on your content with a refreshed user-interface across all of the video applications, including HiDPI support for Windows 8.1 and Mac Retina displays.
• Streamlined workflows—Complete everyday tasks more efficiently, thanks to new tools and refinements, such as Curve adjustments and hover preview Looks in SpeedGrade.

After a successful run using Premiere Pro CC to edit David Fincher's upcoming thriller Gone Girl, two-time Academy Award winner Kirk Baxter has made Premiere Pro the NLE of choice for his new company, EXILE. “I'm happy to see so many of the new features we asked Adobe for during Gone Girl in the upcoming release.”
– Kirk Baxter, ACE

This post provides an overview of the upcoming video releases, including many of the top features and enhancements. For more in-depth information, visit the product blogs for Adobe Premiere Pro, After Effects, SpeedGrade, Prelude, Media Encoder, Audition, and Adobe Story.

Updated user interface
All of the Creative Cloud video applications have been given a gentle facelift, using a more subtle color scheme and simplifying UI elements.

“The first thing you’ll notice when you open them, is the cleaner look to all of the video apps,” said Bill Roberts, senior director of product management. “We’ve modernized and simplified the user interface so that it doesn’t compete with the content. The point is to allow video pros to focus more on their content, and less on the widgets.” 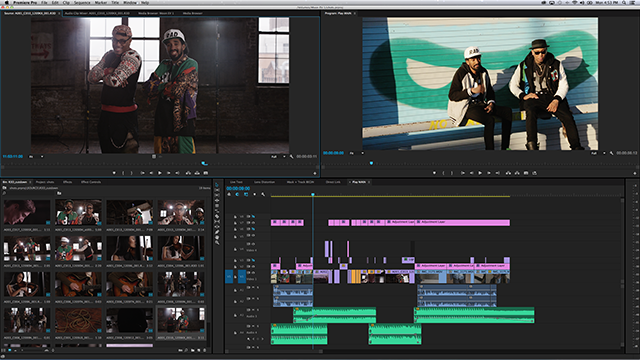 In addition to the UI refinements, the video apps have all been updated to work with HiDPI displays, including Mac OSX and Windows 8.1 devices. “We foresee a day when video professionals will be creating and interacting with their content in a variety of ways across a variety of devices. Our goal is to support this transition as it evolves and this UI refresh lays the foundation for that,” added Roberts.

Consolidate & Transcode allows users to move all relevant files in projects and sequences to reduce the overall project size based. You select the setting you want in the Project Manager panel and then all of their content is rendered everything into a single codec and a compact new project file is created.

Multi-project workflows allow editors to bring everything they need into one workspace. Users can open multiple Media Browser panels for easy access to as many projects as needed. The new Source Monitor Timeline view opens a second Timeline for media and sequences from other projects, making it easy to bring existing clips, edits, transitions, or graphics directly into your current project.

Existing features see some significant new capabilities, too, like enhanced Masking & Tracking, where you can now adjust feathering directly in the Program Monitor, or use the free-draw polygon tool to create complex mask shapes. Use Render & Replace to speed up performance of VFX-heavy sequences by flattening After Effects compositions into video clips – and thanks to Dynamic Link, you can always access the original comps if you need to make further changes. Improved Master Clip effects, Send to Audition, and AAF export to DAWs, are just a few of the other enhancements coming to Premiere Pro this fall.

“This is a packed release for Premiere Pro with some really nice additions to existing features, but our big focus here was on creating easier workflows for large projects,” said Al Mooney, product manager for Premiere Pro. “Consolidate & Transcode, for example, is perfect for facilities who need to trim down large projects. It makes it easy to pass work on to other teams, or to archive editable projects which are still reasonably-sized.”

After Effects CC
The next release of After Effects offers an enhanced Live 3D Pipeline, adding Cineware 2.0 and CINEMA 4D R16 compatibility, so that artists can work faster and more easily with 3D elements in their compositions. Broadcasters and large facilities that use Adobe Anywhere for video will benefit from improved Anywhere collaboration to streamline remote workflows with version tracking and project sharing. In addition, the new version offers a number of usability refinements, such as more visible anchor points on layers, tracking behavior improvements, and more incremental improvements that make motion graphics and visual effects work easier and more efficient. 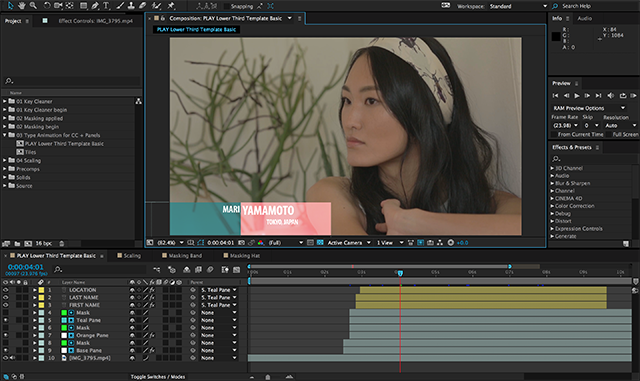 “We’re really excited about where we’re going with After Effects” said Steve Forde, principal product manager. “A special highlight of our 2014 releases is the deeper integration with Premiere Pro and Anywhere for video. This is a great example of how we are streamlining workflows for motion graphics and visual effects artist – and enabling collaboration between teams.

SpeedGrade CC
The next release of SpeedGrade CC is focused squarely on the creative tools, including a significantly enhanced Looks workflow, Curve adjustments and awesome new Grading Layer Grouping capabilities.

Working with Looks in SpeedGrade has never been easier: hover to preview Looks in the main image Monitor, and click to apply. You can drag Looks into the grading layer stack where they will immediately appear as a new Grading Layer Group. This makes it easy to combine existing Looks and LUTs; adjust opacity of each group to get the result you want and … voila! You have a real “Look mixer.” You can also create your own Grading Layer Groups, or copy and paste selected grading layers to apply them to new clips or save as new Looks.

SpeedGrade now offers Curve adjustments, including RGB curves familiar to Photoshop and Lightroom users, as well as Hue & Saturation curves, which allow you to boost or mute parts of the color spectrum. Use Curve grading layers on their own or in tandem with the other SpeedGrade color correction tools. 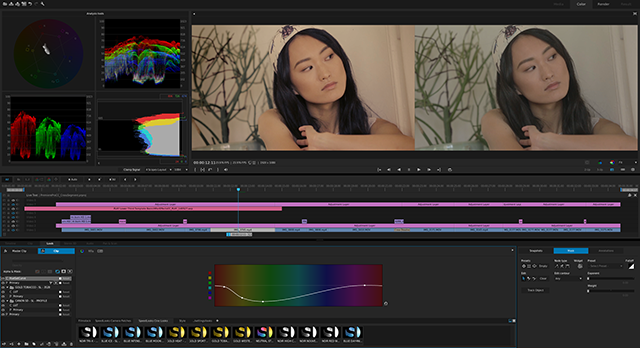 Adobe Prelude CC
Log your metadata while the event is unfolding in front of you. Use keyboard shortcuts on your laptop together with your custom tags to prepare content efficiently—and without typos. Deliver media that gives your editor a running start for a faster turnaround in post-production. Add In and Out points more efficiently and apply transitions across clips in the Rough Cut timeline. Replace, or augment, camera audio with new support for multiple audio tracks. 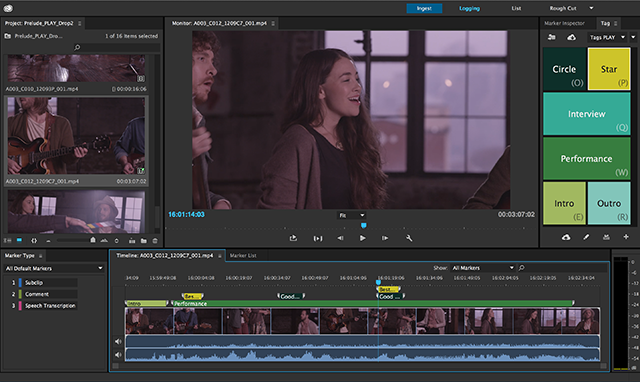 Adobe Media Encoder CC
Render and deliver your work in one fell swoop with Destination Publishing: Add preset options for FTP sites, or your Creative Cloud folder. Send to multiple locations and track rendering and upload in the same panel. With new Watch Folder support for projects, you can automate transcoding of all of your project files at once by dragging Premiere Pro, After Effects, or Final Cut Pro XML projects into Watch Folders. Mux during encode for faster rendering of MPEG2 files with audio. Extended Match Source support now includes QuickTime and DNxHD formats. 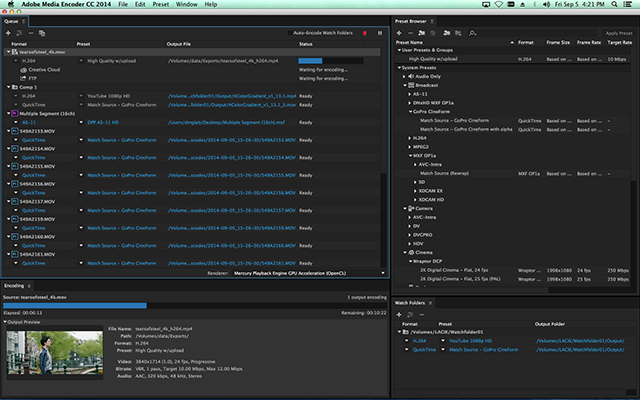 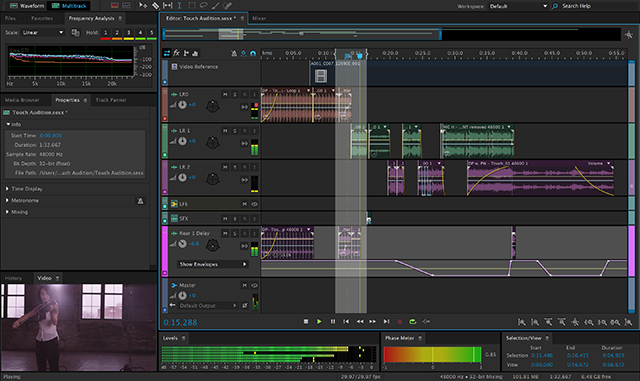 Adobe Story CC Plus
Screenwriters and writing teams can now Customize text boxes so that notes and comments stand out. Fine tune production planning and assign numbers to camera shots to align with your scene order.

Adobe Anywhere
Adobe Anywhere for video adds robust collaboration support for After Effects users and brings refinements to the Adobe Anywhere app for iPad, including new scrubbing gestures and sorting options. A new streaming API allows facilities and broadcasters to integrate content from Adobe Anywhere into a variety of user experiences on the web or mobile devices.

“We’re excited to be showing another strong release at IBC 2014,” said Bill Roberts. “Constant refinements across all of our applications mean we’re always improving the tools, integration, and collaboration. The demands on video pros keep growing. Our efforts are empowering our users to deliver better work, faster and more efficiently than ever.”

Availability
The new updates to the Creative Cloud video apps and Adobe Anywhere for video are expected to ship in the coming weeks.

Adobe will host MAX, The Creativity Conference, Oct. 4-8 in Los Angeles, to share even more amazing innovations coming to Creative Cloud across desktop, mobile, services and community. To be among the first to know when these and other Creative Cloud updates are available, follow us on Twitter @creativecloud or join us on Facebook.

Visit the Creative Cloud video page for links and news from Adobe at IBC 2014 from September 12 –17.

If you can’t make it to IBC, please join us for a special Ask a Video Pro session on Friday, September 12 at 10 am PT (7 pm CEST). Live from Amsterdam, Jason Levine will introduce the new features coming to the CC video apps.