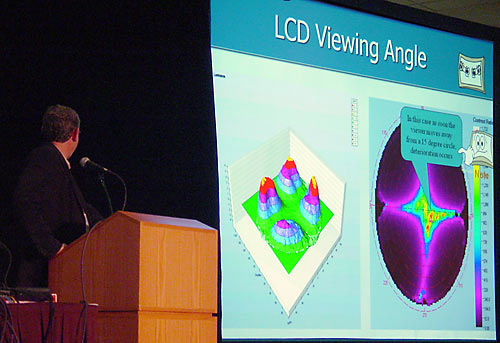 Larry Thorpe and John Galt argued for a more nuanced view of camera resolution, such as MTF (contrast) readings at 200, 400, 600, and 800 TVl/ph, as well as a subjective description, in addition to the standard measurement of the limiting resolution and report on aliasing (see Day 2 pictures). I will be modifying my review methodology accordingly.

Bruce Jacobs and his crew at Twin Cities Public Television (Minneapolis/St. Paul) tested several means of upconverting SD to HD, including FCP and Compressor, hardware boxes from Leitch and Teranex, and upconverters built into Sony and Panasonic HD decks. While there were differences in the quality of results, they all looked more alike than different—and all looked far better than the upconverted SD field reports seen in HD newscasts in my home market of San Francisco / San Jose.

DCS founder and DP James Mathers said the RED ONE camera was usable for features and made a fine image—but he’d still rather be shooting film.

A panel discussed tapeless workflows. Panavision’s Marker Karahadian argued that filmstyle workflows shouldn’t be abandoned: don’t put more people on-set, just send the disks or cards back to the lab for cloning and archiving. Codex Digital‘s Paul Bamborough argued the opposite: there’s no need to stick with workflows designed for the limitations of film technology. PlasterCITY Post folks talked us through their P2 workflow, using “exposed” stickers on P2 cards to avoid inadvertent erasure, and S.two‘s Steve Roach described Fincher’s use of disk recording on “Zodiac”, and how aspects of the workflow—like having automatic slating built into the recorder—was a great time-saver.

A crew from Discovery Networks tested the effects of compression concatenation, starting with uncompressed, AVC-Intra (Panasonic) , and JPEG2000 (GVG Infinity) source clips, and working through 60 Mbps MPEG2 compression on Omneon servers all the way through further long-GOP MPEG-2 compression and DTV delivery. AVC-Intra and JPEG2000, both at 100 Mbps, held up nearly as well as uncompressed, while the 50 Mbps variants of both formats fared less well.

Peter Wilson from HDDC talked about Dirac, an open-source video codec designed by the BBC. The BBC has been charged with the task of providing content on the ‘Net, and the licensing fees for common ‘Net codecs are exorbitant and difficult to administer, so they decided to roll their own. The production-level codec has been submitted to SMPTE as VC-2 and is being used for shipping HD over SD connections within the BBC; we saw a demo of the distribution version, showing 1920×1080 25p video with an 8 Mbps data rate. Dirac has been in development for some time, and many people doubted that it would ever see the light of day, but it looked pretty darned good.

Peter Symes gave a status report from the SMPTE Task Force on Synchronization & Timing. Blackburst dates from 1953 and runs at a really annoying set of frequencies; SMPTE timecode hasn’t (until this year) been able to support frame rates above 30fps. Neither timing reference addresses mixed frame rates in production. The Task Force is looking for participants to help devise forward-looking sync and timing standards.

Wade Hanniball of Universal (who says he has not crossed the Alps on elephants while eating someone’s liver with fava beans and a nice chianti) said that digital cinema distribution makes sense only when all screens in a multiplex have digital projection: as a film moves from the main screen on the first weekend to smaller screens later in its run, it makes no sense to start on digital and then have to switch to 35mm film.

Pixar’s Rob Bogart and Rick Sayer discovered that digital projectors calibrated to the DC28 (Digital Cinema Initiative) spec clipped certain colors in “Cars”, and found that the gamut attached to the DC28 reference white point didn’t accommodate films timed to D65 or D55 white points. They offered Virtual White calibration as the solution—an expanded gamut that encompasses all three white points and includes most of the colors encoded in most of the DCI Distribution packages (DCPs, the “release prints” of digital cinema), which, surprisingly, the DC28 projector gamut does not do nearly so well. Sony have already modified their SXRD projectors for Virtual White, and other projector suppliers are following suit.

Dolby showed a high dynamic range LCD with modulated LED backlighting: a monochrome version of the image is fed to the LED array, while the foreground image is pre-processed to account for the “brightness haloes” created around scene details by the diffused backlighting. Residual halo errors are masked by “veiling luminance” in the human visual system. The result is a visually accurate LCD image with high brightness, high contrast, and very deep blacks, along with reduced power consumption. Active monitoring and calibration provide an even illumination, both when the display is made and through its life as LEDs age differentially. 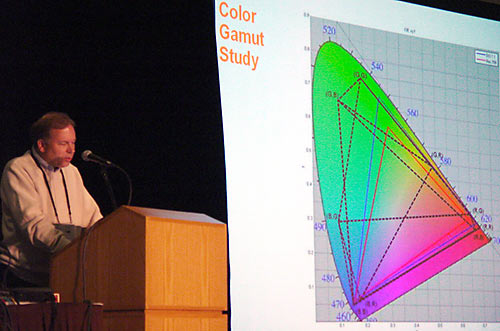 Jim DeFilippis and Yves Montane from Fox described evaluating HD displays to replace CRTs. They tested LCDs, plasmas, and OLED screens, and found them all lacking in some aspects (and superior to CRTs in others). While they aren’t yet satisfied with CRT alternatives, they found a couple of LCDs they’ll make do with until something better comes along (and no, they didn’t say which LCDs they chose: go do your own tests, or go work for Fox if you really want to know!).

Jed Deame of Silicon Optix described the company’s HQV benchmark DVDs, a set of test-sequence disks for SD and HD display evaluation. Remember “The Video Standard”? The HQV DVDs provide a similar set of test signals for the DTV era, stressing scalers, deinterlacers, noise reducers, and the like. Silicon Optix will be adding a community section to the HQV site in months to come, so that users can test their own displays and share their results online. 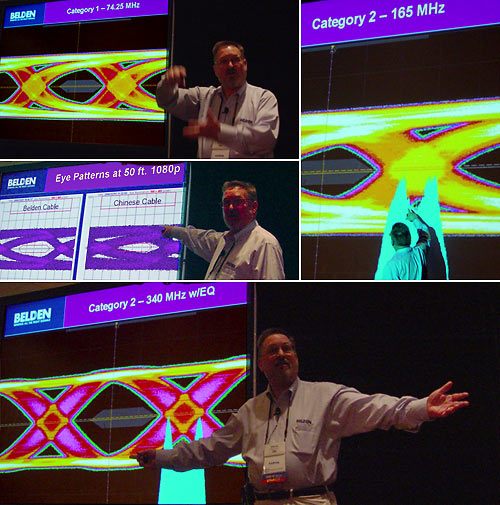 Jerry Pierce, formerly Universal’s senior VP for Technology, opined that Internet TV delivery is about 2 years away. He discussed ad-supported free distribution, low-cost SD streams with limited functionality ($1-$2/hr), and premium-rate HD streams with full search/step/trick-play modes ($2-$4/hr). He broke audiences down by gender: girls have Destination, Background, and ADD viewing modes, while boys have Lean Forward, Lean Back, Lie Down, and Ignore modes (!). Different delivery stream qualities and costs suit different modes; one size will definitely not fit all.

Mark Schubin wrapped up the three days of Total Tech Overload with the handing out of door prizes: ATSC tuners, HDMI switches, a TiVo, a Blu-Ray player, and similar geeky toys, but this time, no glow-in-the-dark statues of St. Clare, the patron saint of Television. 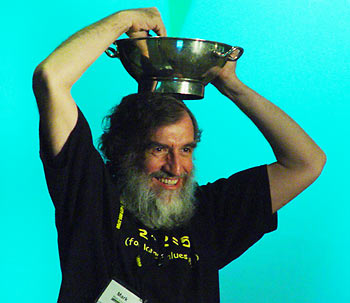 Oh, the first opera commissioned for TV? The BBC’s 1938 “Cinderella”. So now we all know. 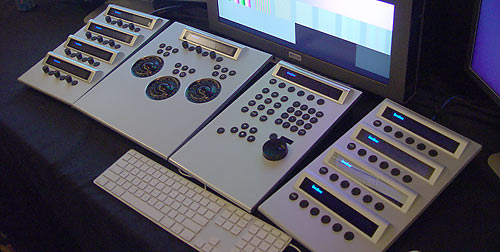 Apple’s Color was one of several apps using these control surfaces from Tangent Devices. Iridas had the all-black Tangent on their SpeedGrade 3D demo (using footage from “The Dark Country”, as seen in Wednesday’s 3D Supersession). More elegant than a JLCooper Spectrum, perhaps, but a darned sight more expensive: US$29,000.

S.two (field recorders) had a Dalsa 4K cine camera outputting 4k uncompressed, while Telecast (fiber transmission systems) had the Sony F23 feeding their fiber. How often you see these two cameras side-by-side in the same room, especially when neither one is the point of the demo? 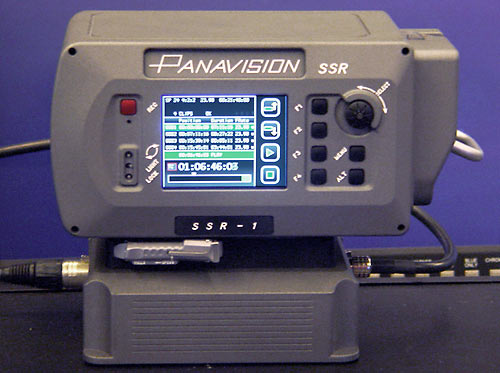 Panavision showed a prototype of their solid-state recorder with its docking station. It stores about 20 minutes of 4:4:4 or 40 minutes of 4:2:2 1920×1080/24p material, weighs 6 pounds, and docks to a Genesis where the SRW-1 deck normally goes. Long-suffering Steadicam operators will love it.