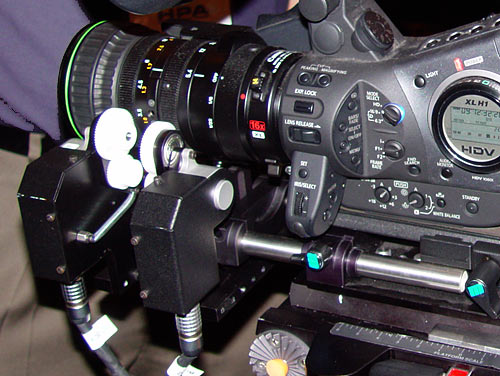 On this, the first “real” day of the HPA Tech Retreat, we were treated to 3D cinema demos and discussions, a CES review, a phased-array mic for sports recording, and more.

We started at the Cinemark Theater with a presentation on the state of 3D digital cinema, with a practical demo on a brand-new 60 foot screen using the RealD system (passive glasses using circular polarization). Clips from “U2 3D”, “Hanna Montana”, and (for fans of DP and CML founder Geoff Boyle) “Dark Country” were shown, and people involved in production, post-production, and exhibition discussed technical and business issues.

On the technical side, for example, did you realize you should really post the show for the screen size it’ll be shown on? Images at infinity should be offset on-screen by the interocular distance, about 2.5 inches, but the on-screen offset for any given pixel offset in the digital master will depend on the screen size. You might want to register the left- and right-eye image differently for a 40″ LCD vs. a 60 foot cine screen. (Practically, I’d guess this’ll be solved by authoring content for the largest expected screen, and letting smaller displays “scale down” infinity as appropriate, but still, it’s an interesting question).

The business model was batted about: do increased production and exhibition costs get paid back in increased revenue? The producers like it: per-screen takes for 3D run a lot higher than for 2D screenings. But exhibitors say it’ll take 10 films per year to make it pay. Fortunately, production is ramping up, and 2009 should see 10-12 3D releases.

Whether 3D is here to stay this time or not, no one can say – but 3D is moving into home displays from several vendors such as Samsung and TI, so we’ll just have to see.

Quote of the day, from Disney’s Chuck Viane: “If you want to know what the future is, create it!”

Back in the conference center, Mark Schubin ran through the year in review, and started asking quiz questions, such as “what was the date when Business Week ran the headline ‘3D Invades TV’?” (that was easily Googled and won; a trickier question is, “what is the first opera commissioned for TV?”: Marks tells us the answer is NOT 1951’s “Amahl and the Night Visitors”. Mark says that any research methods are allowed… so if you know, please email me ASAP!).

More stuff: a CES review (smaller, faster, cheaper, more capacity, more convergence, thinner, etc.); the Squarehead Technologies AudioScope phased-array microphone system (a 7-foot disc with 300 embedded mics, a wide angle camera for array steering, and a PowerMac recording all 300 signals at the rate of 19 MB/sec; allowing the operator single out a lone voice in a crowd, both live and during replays); panel sessions on the end of analog transmission in the USA (17 Feb 2009, less than one year away) and how broadcasters will handle it (hint: even networks aggressively implementing the Active Format Descriptor for aspect-ratio control admit we’ll be stuck with protecting the 4×3 safe area in 16×9 programs for decades to come), and the end of analog transmission and how cable and DBS will handle it. And more, of course!

The demo rooms opened, filled with fascinating tech. The image above is from Cinital‘s stand, showing a Canon XL H1 with Cinital encoders tracking zoom and focus. The camera is mounted on a prototype O’Connor encoding fluid head. All these encoders let Cinital’s system composite live camera moves over an HD background plate, including zooms and focus pulls between foreground and background, all in real time, with no perceptible jitter or misregistration between FG and BG. Cinital’s data can be used in many 3D CGI systems for after-the-fact rendering, too, or even realtime interactive previz. Direct interfacing with data-enabled Fujinon lenses is available, and Cooke S4/i data capture is planned, too. It’s all in early stages of deployment so far, but looks very promising.