LCDs, Radiosity, and the AMPAS IIF 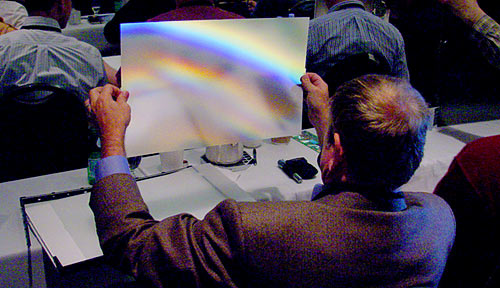 “Day 0” of the 2008 HPA Tech Retreat in Palm Springs offered four sessions; I attended three: Euredjian on LCDs, Poynton on Radiosity, and AMPAS on the Image Interchange Format.

Martin Euredjian of eCinema Systems presented “Understanding Liquid Crystal Displays for Broadcast and Motion Picture Applications: A Hands-On Lab”. He talked about the tradeoffs between LCD and CRT displays, and described how LCDs work and how they’re manufactured. Attendees had the opportunity to take apart surplus 23″ panels; the actual LCD panel itself is an incredibly thin sandwich of glass, polarizers, thin-film transistors… and liquid crystal fluid, which was originally derived in 1888 from refined carrot juice (!). The backlight, diffuser (which itself was comprised of two diffuser sheets and the pictured 3M film, which combines reflective and diffractive properties to increase the system’s light-emitting efficiency), electronics, and frame make up most of the bulk.

Charles Poynton gave an entertaining presentation on “Radiometry, Photometry and Scene-Linear Image Acquisition”, in which he discussed the mathematical derivation of the units of light measurement; how perceived light relates to luminous energy; how image sensors collect light and are limited by photon noise; how camera and display gammas add up to present a perceptually proper sunlit image when viewed in dim conditions; and more. He finished up by working out how bright your Digital Cinema projector needs to be, given standard screen brightness, patron seating, and audience density requirements: 30 lumens per person. 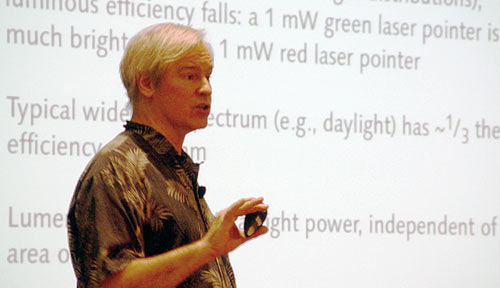 For me, the big news of the day was the AMPAS presentation on the proposed Image Interchange Format (IIF). Like the Advanced Authoring Format (AAF) and the Material eXchange Format (MXF) before it, IIF is intended to be a universal media-interchange format. Unlike AAF and MXF, IIF appears to be tightly targeted, well constrained, and not too ambitious for its own good, so it actually has a better-than-even chance of being highly useful right out of the gate.

IIF is intended to be “the digital replacement for 35mm negative” as a known quantity for exchanging and manipulating images of up to 4k resolution and 16 bit pixel depth (in this case, the “half-precision floating-point” format, encompassing 30 stops of dynamic range with the coarsest step between levels of 0.1%). It’s based on ILM’s proven OpenEXR image format, constrained to a fixed, wide-gamut color space (ACES – Academy Color Encoding Space – encompasses every visible color in the spectrum), one of three storage schemes (uncompressed, PIZ lossless, and B44A lossy), and limitations on the elements allowed in OpenEXR files to those that (to oversimplify a bit) are playable in real time.

A well-designed system architecture imports images through an Input Device Transform to account for camera or film scanner differences; digital camera images can transform straight to the ACES representation, while scanner inputs normally transform first to an APD file – Academy Printing Density, an improved, better specified (and documented) analog of a Cineon Printing Density file – and thence via an “unbuild” transform to ACES. ACES uses linear-light coding and can encompass bright sunlight to deep shadow in a single scene within its 30-stop latitude, and it’s the format all effects and compositing are performed in. From ACES, a Reference Rendering Transform (RRT) file is generated; the “digital release print” with film-style compressed shadows and highlights and a dynamic range of a paltry 1,000,000:1. From that RRT master, Output Device Transforms for particular devices – DVDs, Digital Cine projectors, film stocks, etc. – allow that single graded master to provide properly corrected versions for each release format, including further compressions for their limited latitudes and differing brightness / contrast / saturation / gamma requirements.

There are other aspects, too: a Color Transform Language to provide color mapping functions from gamma correction through 3D LUT generation; separate XML files to carry scene metadata; methodologies to allow mapping even highly-processed camera images to be mapped back to original scene linear-light values with consistent colorimetry. I’ve probably missed a few, too.

All this IIF stuff codifies and rationalizes a lot of current practice,unifying it under a consistent set of transforms, definitions, and methodologies that should serve to greatly reduce the confusion, translation failures, and impedance mismatches encountered when handing off material between post facilities. Cool stuff: sensible, nicely designed, and practical enough to implement. Look here for more info: http://www.stcatp.org/, http://www.oscars.org/council/ctl.html, http://www.openexr.com

There was also an ATSC Audio Summit, which occurred at the same time as Poynton and AMPAS, so I can’t say what happened there. And I’m sure I missed describing or misrepresented important bits from the sessions I did attend – it was a long and busy day, and I have to get some sleep, because there’s lots more over the next three days. But that happens at the Tech Retreat – it’s like drinking from a fire hose.