The HPA Tech Retreat is an annual gathering of some of the sharpest minds in post, production, broadcast, and distribution – and the 2015 Retreat is now over. As Leon Silverman and Jerry Pierce like to ask, what just happened?

If there was one theme that stood out for me, it was that the “tripod of picture quality improvements” – higher resolution, wide color gamut, and high dynamic range – has moved from the future to the present. All of these, which last year were seen as things to strive for, are now practical realities that folks in the field are grappling with and whining about on real-world productions.

Resolution (4k/UHD) is the farthest along (with a hat-tip to Dalsa’s 4K Origin camera from 12 years ago and the nearly eight-year-old RED ONE, of course). 4K and UHD cameras are commonplace, and displays are to the point where it almost doesn’t make sense to buy a TV that isn’t a UHD TV… and in a year or two, you may not be able to buy a large panel that’s not at least UHD resolution.

And yes, there’s a middle way between the big cine cameras and the GoPros and GH4s; both Grass Valley and Hitachi had 2/3″ 4K/UHD cameras in the demo room. 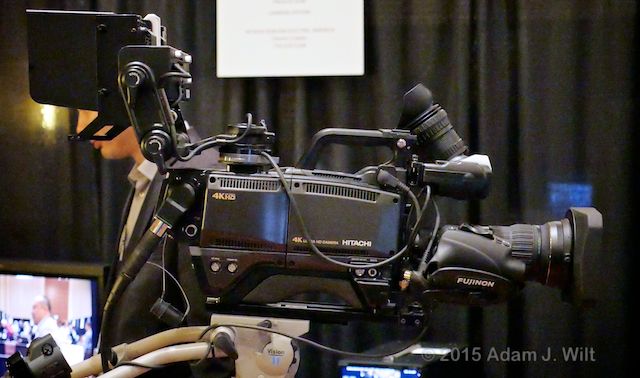 The Grass Valley camera, as described by Peter Centen on Thursday, is very similar.

The other two legs of the tripod, HDR and wide-gamut color, are also on firmer ground this year. Dolby’s PQ (perceptual quantizer) tonal curve, allowing HDR material to be cleanly encoded in a 10-bit signal, is now SMPTE Standard 2084; Rec.2020, the wide-gamut color space, is being addressed by camera, display, and projector manufacturers alike. More importantly, HDR and wide color aren’t just tech specs, people are starting to author content for them, and the pioneers are far enough along in the process to start complaining vigorously about inconsistencies in output devices and how they render the material. This is progress!

The enabling umbrella for most of this work is ACES, the Academy Color Encoding System.  With the release of ACES 1.0, we have an industry-wide standard for representing images in post that breaks the boundaries of 0%-109% gamma-encoded brightness and Rec.709 color. The ACES colorspace allows for colors well outside 709, P3 and 2020 spaces (not that you can see primaries that far out, but you’re no longer limited by the colorspace “container format” the way those earlier standards do), and dynamic range is, for all intents and purposes, unlimited.

True, the cine guys have been able to work in OpenEXR and wide-gamut color already, but ACES is a consistent, standardized way of representing wide-ranging color and tone, making image interchange easier and more predictable. Camera images mapped into the ACES colorspace via a camera-specific IDT (Input Device Transform) can be dealt with in a consistent manner from one to another, without losing those variations of color rendering and tonal representation that differentiate them and give them unique characters. LUTs can be applied in a standardized way for predictable results; ODTs (Output Device Transforms) map the images correctly into the characteristics of a display, projector, or other renderer…

…at least, that’s how it’s supposed to work. Presenters expressed considerable concern about conveying HDR material to the viewer given the wide variations in the HDR displays shown at CES and trickling into studios and homes; there’s still development needed to ensure that creative-intent metadata is sent to the display device, and is properly and appropriately used therein to map the full-range signal into the capabilities of that display. So the End of History is not yet upon us. There’s work yet to be done.

[Let’s not even broach the topic of high frame rates. It seems nothing excites such a passionate response as HFR, not even fractional frame rates and drop-frame timecode!]

No Tech Retreat coverage is complete without a mention of Mark Schubin’s historical quizzes. He posts these things, typically one at a time, outside the conference room. Here are this year’s questions and amswers: 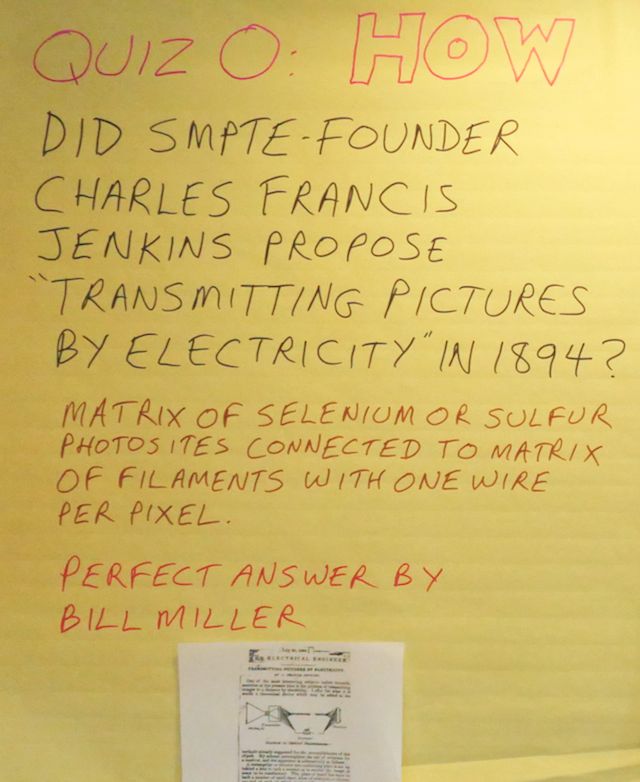 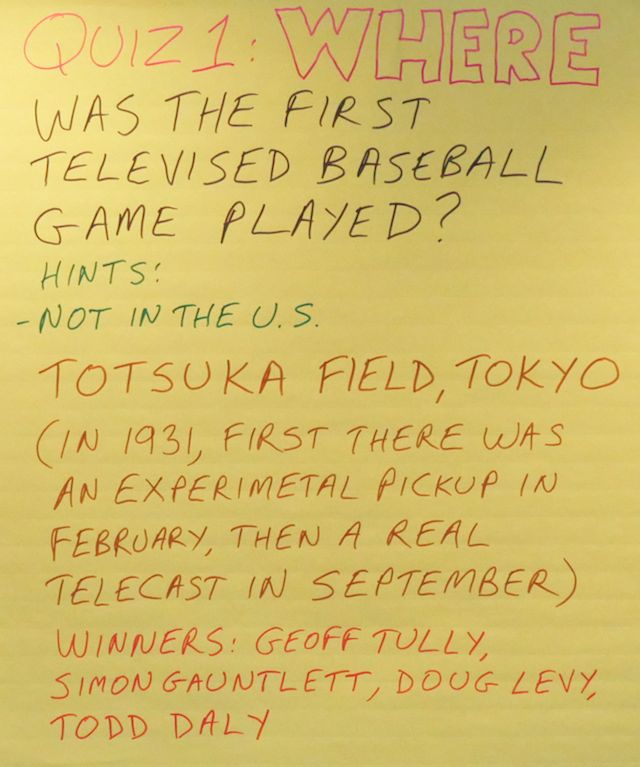 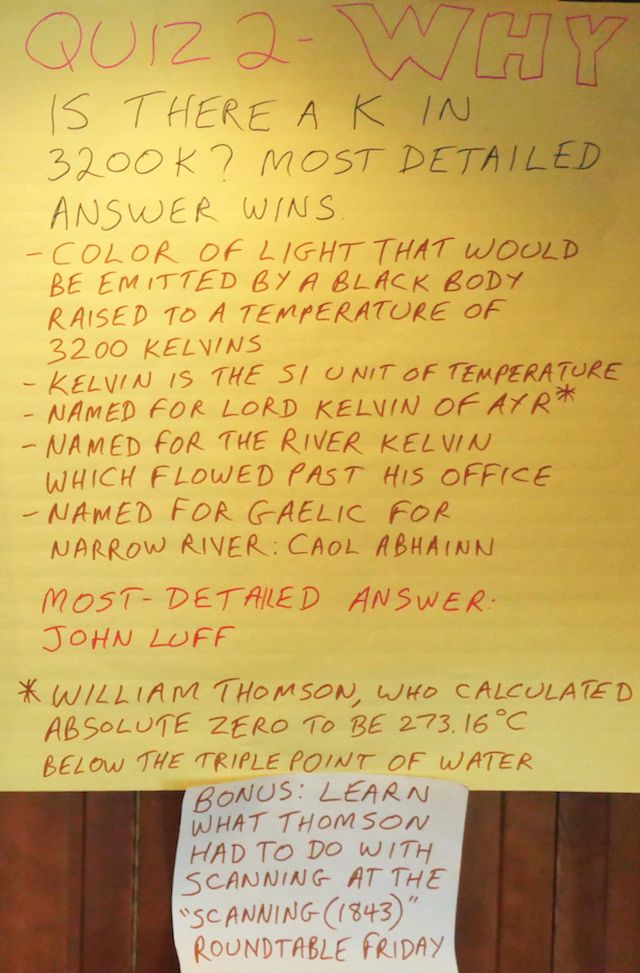 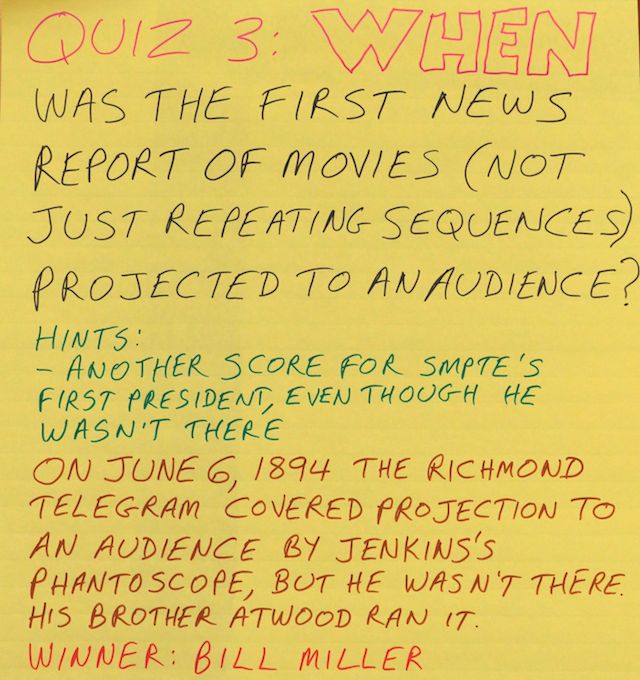 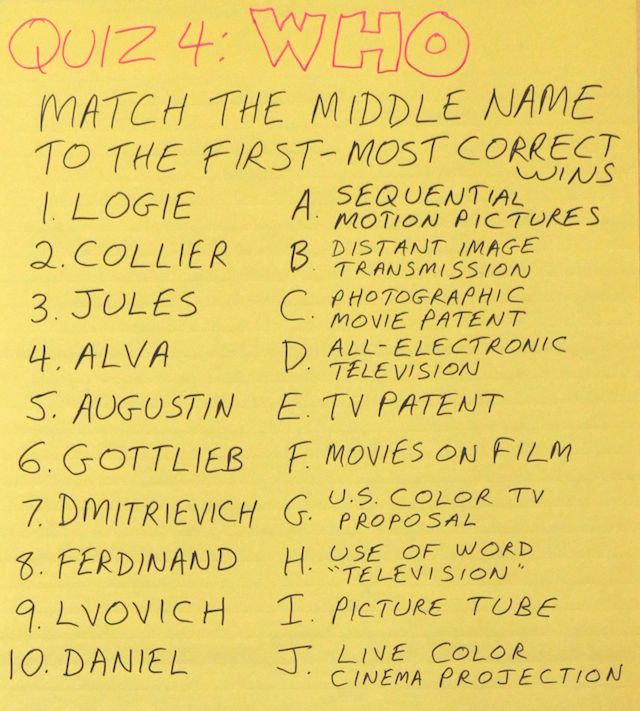 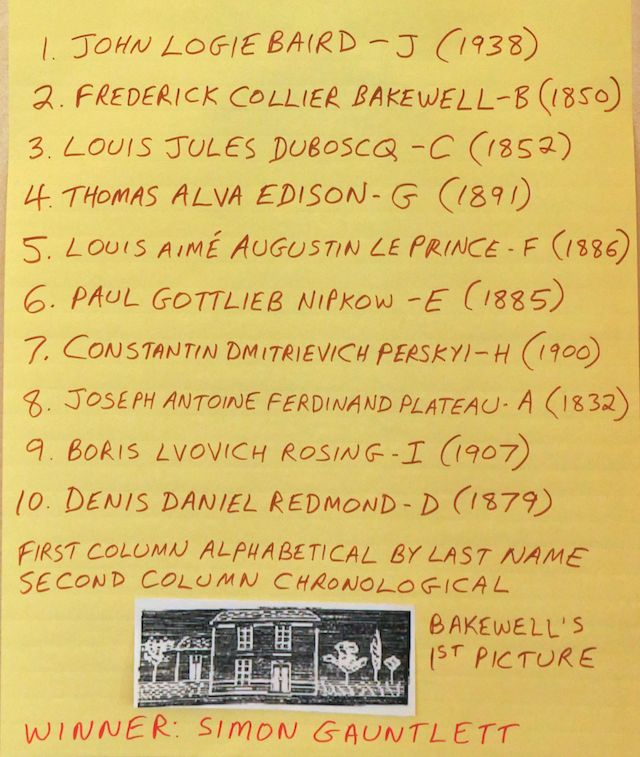 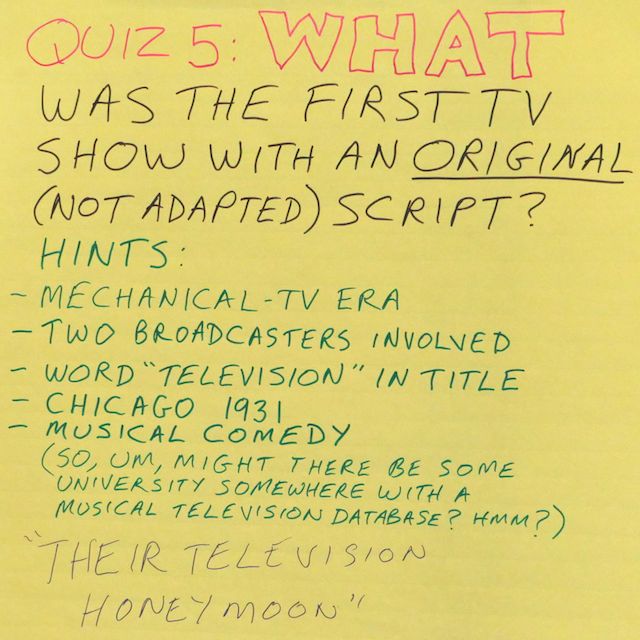 [Updated 10:53 PST 18 Feb: Quiz 5 winner was Peter Symes. Mark Schubin says, “They’d put away the markers by the time I got out, so I just scrawled the answer.”]

And, finally, here is Mark Schubin himself, as seen at the Thursday night social gathering: 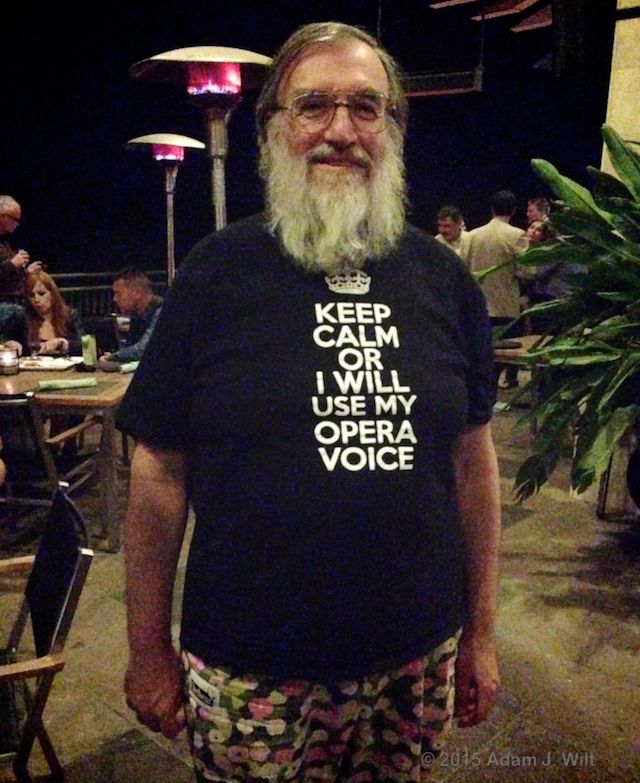 The photo does not show the squeaky pink bicycle horn with which Mark normally wears on a lanyard ’round his neck, with which he alerts all and sundry to the passage of time and the imminent start of the next set of sessions.

For some things, you really do have to be there.

Disclosure: I attended the Tech Retreat on a press pass, which gave me free entrance into the event. I paid for my own travel, local transport, hotel, and meals (other than those on-site as part of the event). There is no material relationship between me and the Hollywood Post Alliance or any of the companies mentioned, and no one provided me with payments, bribes, blandishments, or other considerations for a favorable mention… aside from the press pass, that is.