Frustrated by the DreamColor monitor’s complex integration and frequent need for a “Band-Aid”, people often ask me about alternatives for pro video applications. 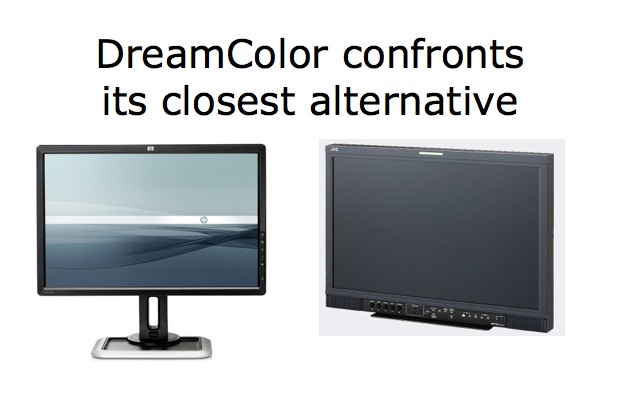 Many people appreciate the HP DreamColor monitor’s multiple virtues enough to tolerate its complex integration issues for pro video systems, which are so severe that they have merited over ten articles in the past few years. However, some readers (and some of my consulting clients) sometimes become so frustrated with the complexity and frequent need for a “Band-Aid” (especially in the age of free, bundled, or affordable DaVinci Resolve versions for grading) that they have begun to ask me for alternatives to the DreamColor monitor in a similar price range that can be plug-and play, and just work. So this article is dedicated to comparing the DreamColor monitor to its closest alternative (to my knowledge).

To my knowledge, the HP DreamColor’s closest alternative in its price range is the DT-R24L41D from JVC. In the Americas, this model is typically sold with the regional suffix “U” as the DT-R24L41DU. In Europe and some other areas, it is sold with the regional suffix “E” as the DT-R24L41DE. Fortunately, neither version is a segregated monitor in terms of compatible signal formats or framerates. The differences seem to lie only in warranty and voltage requirements. Some ProVideo Coalition magazine readers may recall that I covered this model briefly about a year ago in Why FCP X’s secondary monitor should be 1920×1200, not 1920×1080 (which of course was 100% true back then, before FCP X could be deeply integrated with a professional i/o interface, as it now can. Now that title remains true only when FCP X is used without such an interface.).

Comparison chart between the DreamColor and the DT-R24L41D

Below you’ll find a comparison chart I created between the DreamColor and the DT-R24L41D based upon my understanding of each monitor. I wrote to both manufacturers for their verification. HP already responded, but for some reason, JVC has declined to respond so far. If JVC responds later with any contradictory information, I’ll update this article accordingly. 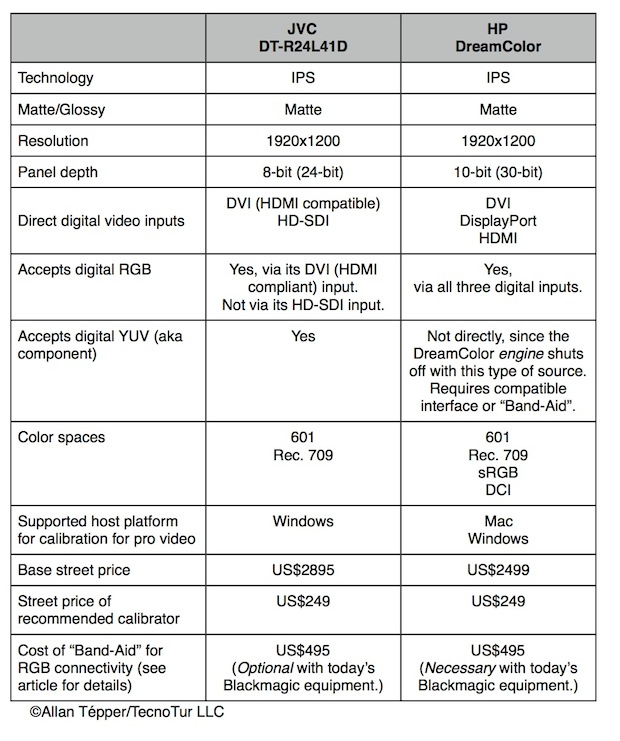 Point-by-point commentary of the above comparison chart

IPS Technology
This means that the image looks good even at wide angles on both monitors, both left and right plus up and down.

Matte/Glossy
Both are fortunately matte, which is my preference, especially when combined with IPS.

Resolution
Both are 1920×1200 native. In the case of the DreamColor when connected to a professional audio/video interface via DisplayPort or HDMI at 1920×1080 (1080p) 1:1, it means that there will be 120 extra pixels which will become a 60 pixel black stripe above and a 60 pixel black stripe below. When connected directly to a Mac with FCP X, instead of stripes, there will be data and even menus, as explained and illustrated in Why FCP X’s secondary monitor should be 1920×1200, not 1920×1080. In the case of the DT-R24L41D when connected to a professional audio/video interface via HD-SDI, there may be 120 empty pixels, or the owner of the DT-R24L41D may decide to have audio levels or text in that space. In the case of the DT-R24L41D when connected via its DVI input (which is HDMI compliant) directly to a computer, its behavior will be the same as indicated with the DreamColor. Both the DT-R24L41D and the DreamColor are also capable of viewing 720p (1280×720) as 1:1 if fed such a signal, and both can also scale that signal up to 1080p (1920×1080) when desired.

Panel depth
The DreamColor panel is true 10-bit (aka 30 bit), although of course you’ll only take advantage of that when the source material is truly being handled as 10-bit and when your connection to the DreamColor is also 100% 10-bit. For example, some interfaces (i.e. the Matrox MXO2 series) output an 8-bit signal when set to deliver RGB over its HDMI output. On the other hand, despite the DT-R24L41D’s 10-bit processing, its actual panel is only 8-bit to my knowledge.

Accepts digital RGB
The DreamColor will accept digital RGB from all three of its digital inputs, and in fact, that is preferable to keep its DreamColor Engine active. The DT-R24L41D will accept digital RGB via its DVI (HDMI compliant) input, but to my knowledge it can’t via its HD-SDI input, since to my knowledge it is the original HD-SDI, not dual-link or 3G-SDI. See ahead for the RGB path philosophy later in this article.

Accepts digital YUV (aka digital component)
The DT-R24L41D will accept digital YUV via either of its digital inputs. However, the DreamColor’s Engine won’t be satisfied with YUV, and that’s why a “Band-Aid” is often required, especially with Blackmagic’s interfaces, whose HDMI don’t currently deliver RGB. As of the publication of this article, only about 127 of you have signed my online petition so far, so I doubt that Blackmagic will see any incentive to change this detail via software or firmware.

Color spaces
The DreamColor monitor can handle several color spaces, including 601, Rec. 709, sRGB, and even DCI. To my knowledge, at the publication time of this article, JVC’s calibration software only does 601 and 709. If I hear otherwise about that, I’ll update this article accordingly.

Supported host platform for calibration for pro video
As I published in HP DreamColor Mac connectivity & functionality: update 2012.1, the DreamColor monitor recently received a Mac version of its calibration software (in pro video mode), in addition to its prior Windows version. To my knowledge, the JVC calibration software remains exclusively Windows, so if you have a Mac-based suite, you’ll need to make special arrangements to calibrate a DT-R24L41D (i.e. add Windows to your Mac, or bring in a Windows laptop temporarily).

The rest of the items in the chart are really self-explanatory.

If you demand a true 10-bit panel in this price range for a pro video application, then the DreamColor is the only option to my knowledge. The same applies if you demand the flexibility of all of the mentioned color spaces, although JVC could potentially add some of them via software. If you are okay with 8-bit, 601, and 709, then the DT-R24L41D has the advantage of being plug-and play in most situations (via either of its two digital connections), and when used without a “Band-Aid”, can be less expensive than a DreamColor (especially when the DreamColor is used with a “Band-Aid”). In the next section, you’ll see when a “Band-Aid” might be appropriate even with a DT-R24L41D.

RGB path philosophy with the DT-R24L41D

If you are doing color correction within your editing program -especially with YUV-based raw footage (including HDSLR/HDV/H.264/AVCHD/DVCProHD/AVC Intra/EX/XDCAM-HD/HDCAM or even any HDCAM-SR not shot in RGB mode) on a YUV sequence/project, it really doesn’t make a difference where the YUV>RGB conversion takes place. So if you’re using a DT-R24L41D connected via standard HD-SDI (YUV) or YUV-over-HDMI (via the DVI connector), you are not losing anything by having the DT-R24L41D do the conversion to RGB. However, if you are using a grading program that handles everything in RGB -and demands prior transcoding of all YUV footage to RGB… and you are also okay with an 8-bit panel, you’ll probably want to make sure that the entire path from the computer to the DT-R24L41D be 100% RGB, to eliminate further conversions from RGB-to-YUV-and back to-RGB. If that’s DaVinci Resolve (which today must be with a Blackmagic interface if you expect full screen video on the DT-R24L41D), then that means that you’ll need a “Band-Aid” with the DT-R24L41D anyway, just as if you had been using a DreamColor monitor. Keep that in mind.

Those readers who have read my other articles about the DreamColor know that the two prohibited signals for the DreamColor Engine are YUV and interlaced video (or even PsF video).

Even though the DT-R24L41D accepts PsF, I recommend sending it true progressive whenever possible, both to reduce conversions and in order to have the DT-R24L41D accurately display the type of signal on screen.

In the past few years, I have published at least ten related articles, and Art Adams and Patrick Inhofer have also published related articles too. Many of those articles are kind of a prerequisite for this new article, and are listed and linked at the end of this article for those who may have missed them.

I have just published an ebook in two languages.
The format is Kindle, but even if you don’’’t have a Kindle device, you can read Kindle books on many other devices using a free Kindle app. That includes iPad, iPhone, Android phones, Android tablets, Mac computers, Windows computers, some Blackberry phones and Windows 7 phones.