…for beginners and others’ toolkits 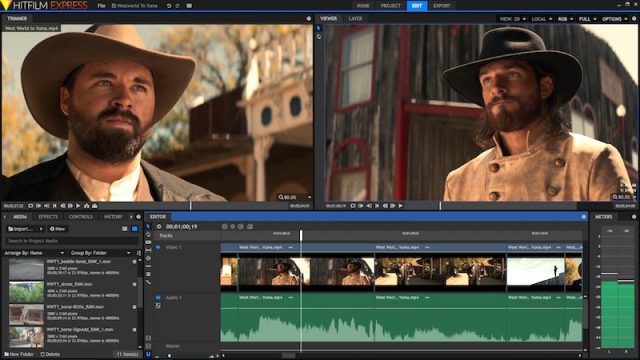 Hitfilm advocates include YouTube superstars and indie filmmaking experts like Freddie Wong, Film Riot, and Corridor Digital. There are several tutorial projects built right into the app, which are perhaps too sensitive, with the slightest click sending you off into a browser. Most notably, there’s a new demo short from Film Riot on what can be done in the app as part of the new Westward-oriented tutorials (scroll down), the 6th in a series of major tutorials clusters.

Film Riot’s Westworld to Yuma showcases visual effects which can be completely replicated inside of  free software HitFilm Express 2017. Users will be able to download project files and follow tutorials to recreate shots at home using the actual footage from the film. There are 4 new tutorials ready for this series, including old-timey muzzle flashes, how to track tricky objects like an iPad, create a realistic sky replacement, and how to create stunt effects with composites (there’s even a light wrap plug-in for blending).

Whether creators are looking for an editor, a visual effects toolkit, or a supportive creative community, HitFilm Express users will find more than just an NLE — there’s pro-level animation tools, 360° video tools, and over 150 advanced effects such as lightning, smoke and explosions. Designed to run on almost any computer, the new 2017 version features new effects, including heat distortion and sci-fi themed lightswords, audio tools, new export queue options, support for 4K projects, and more. And HitFilm Express 2017 offers flexibility through a set of optional expansion packs with additional features and effects, including motion tracking and easy 3D text tools.

Being a younger app, Hitfilm Pro and Express lacks the many subtleties found in mature apps that now mostly require continual subscriptions fees – but it is fast and responsive and uses familiar UI conventions. Hitfilm Pro beats After Effects with better native 3D, native particles, and certain other effects not built into After Effects, but it doesn’t have the depth of After Effects’ two decades of development.

The editing mode is more akin to traditional NLEs than the quirky Apple iMovie and FCPx, and has more useful features than last year’s version. Hitfilm Express is a boon to new and occasional users, and should see more action than other useful utilities like Handbrake, especially if you bump up against activation limits on other software. It’s pretty amazing for free software, as is Blackmagic Fusion and Resolve Lite.

The main features of HitFilm Express 2017 include:

Editing Tools: UPDATED Industry-standard quality formats, editing trimmer with Insert and Overlay functionality, keyboard shortcuts to set the in and out points in the trimmer,  J-cuts, L-cuts, new shortcuts to link and un-link media on the timeline

By the way, there are several YouTubers introducing Hitfilm Express 2017: