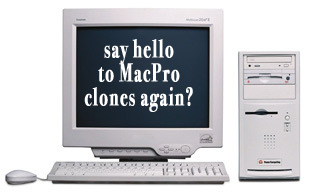 For professional editors and post-production artists the choice of Macintosh is usually almost a religious decision. We want to nothing to do with the PC, not in the edit suite or with our machines at home.

Macs have always had a prominent place in creative disciplines like graphic design, photography so Macintosh dominated post-production is no surprise. The Mac OS has always felt like it was created as a simpler, more elegant way to work with your computer so that has appealed to the right-brain thinkers since day one.

For video post production, there’s a very large group of professionals who almost exclusively use Final Cut Studio as their post-production backbone. For them a Mac is the only choice as Final Cut Pro and its support applications don’t run on a PC. Then there’s a group of individual editors and small shops that have to maintain their own machines and don’t want the hassle and headaches that often come along with keeping a Windows machine in good working order and virus free. That last point is a bit of a generalization but we all know Windows is more of a pain for most to update and maintain. The Mac vs. PC debate is a tired one (almost as tired as Avid vs. FCP) but debates like that have real impact on workflow and purchasing decisions so it’s a debate that will always rage.

But Macs have a downside too. The Mac Pro machines are for the most part more expensive than their PC counterparts. If you’re only working with ProRes in FCS then a PC with supporting processor and drive speeds could be a cheaper alternative if FCS ran on a PC (the Adobe CS5 Suite does but that’s another story).

I think a more troubling problem for the Mac beyond cost is that the only tower-based workstation option is the Mac Pro. While it is a truly breathtaking exercise in industrial design when you open the case and begin to tinker with the internals (it has unbelievably easy access to all the parts) it really only comes in one configuration with a set number of PCI slots.

Today we sit in a world of post where the Mac Pro just doesn’t have enough PCI slots. We need more. A lot more. And while a PCI expansion chassis is a possibility I have yet to see one working out in the world (if you’re using a PCI expansion chassis on your Mac Pro please comment on that experience below). Life would be so much easier if we had a few more slots.

Hypothetically speaking here’s my dream list of what I would like to see, card wise, in my Mac Pro. I realize that there would be some quite critical software / hardware / driver conflicts if this configuration could exist but this is a dream. In no particular order here is what my dream system would consist of in the same box:

How about a Hackintosh?

One possible option to get all those PCI slots you might need could be to build a Hackintosh. That’s taking a PC and hacking it to run the Mac OS. I have never seen a Hackintosh in the wild running FCP or working in an editing suite but in theory it’s possible, though I have to admit I would be scared to rely on a Hackintosh as my only machine to pay the bills. In fact I wouldn’t … no way, no how.

What looks to be the definitive guide about building a Hackintosh was recently published over at NoFilmSchool. It’s an extensive, 17 page article with video, links for what to by, and a lot of text and images that goes step by step into just how to build such a unit. Being that this comes from NoFilmSchool it’s a guide that’s geared toward video editors so there’s a page that talks specifically to the video editor as well.

They even mention the Hackintosh in a new post about latest NVIDIA Quadro 4000 card for Mac.

Then there’s the PCI expansion chassis

Then we’ve got the option of a PCI expansion chassis. There’s quite a few options out there and this Reduser thread called Making everything fit in a Mac Pro 4,1 PCI-e is a great place to begin research (there’s a lot of other good discussions over there too) into an expansion chassis with both some pros and cons.

Who makes these chassis? There’s Dulce Systems, Cubix, and iStoragePro just to name a few.

The expansion chassis is a possible solution and it might become more viable as manufacturers realize the limited slots of the MacPro and certify some of these things for their hardware and software. Again, I’ve never used one personally so if you have one in your facility then please comment on them below.

Send in the Clones, again

What really seems like a more logical alternative to building a Hackintosh or switching to the PC would be for Apple to bless a hardware manufacturer like Boxx or 1 Beyond and allow them to build an official Mac-clone. I know, Apple’s been down this road before as I owned a Power Computing machine (which I used extensively for early video editing) and it was a great computer. But we all know that Steve Jobs killed all the Mac clones when he returned to the company, and with great success.

But that was a different time. Apple had to rebuild their dying business on the back of the Macintosh as that was all they had at the time to sell and run the soon to be introduced Mac OS X on. No iPod, iPhones or iPads. Today, while still a large part of their business, Macs appear to take a backseat to the consumer iProducts. And the MacPros seem to be even further back in Apple’s mind as iMacs and laptops sell a lot more than the MacPros.

Jobs was quoted a while back saying that PCs are like trucks
which translates to the idea that most people don’t need them. Even fewer need the semi that would be a MacPro. With Apple killing the professional server product Xserve and appearing to let their pro applications languish behind the competition it makes you wonder how long the MacPros will survive. It’s hard to imagine them going away completely but if you listen to the TWiT network’s MacBreak Weekly podcast you’ve heard a lot of discussion and prediction over there that MacPros (and maybe the Mac OS in general) will be phased out over the coming years. While that sounds like a lot of doom and gloom hyperbole some of the arguments are pretty good. As one who makes their living on the backs of the MacPro I listen to this type of discussion very closely … and wouldn’t be totally surprised if something like that did happen.

That’s a scary thought for content creation professionals and post-pros in particular. We need these MacPros to create all that content people see on TV, at the movies and on their iProducts. And though there’s a lot of YouTubers out there doing just fine with an iMac or a MacBook Pro, if you’re heavily into professional post-production (and using a Mac) then you are working with a MacPro … and you may have those PCI slots maxed out.

So this is a call to Apple to allow one (at the very least) of the niche PC makers out there who target the professional content creation industry to make a Macintosh clone. Let them build out a clone that has plenty of slots for PCI cards, RAM, hard drives and optical units. Maybe even toss in USB3 and Blu-ray in there too. If we can get those things externally then there’s no reason a good Mac clone couldn’t build them right into their cases as well.

I never thought that I would entertain the thought of a PC as my main editing machine but if Final Cut Pro (and the Studio) doesn’t evolve into a more modern tool and I continue to need more PCI slots then moving to a PC for editing work might become a possibility.