We take the wheels for a spin 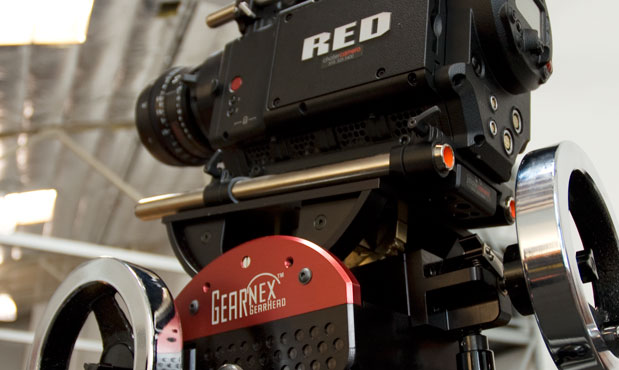 Camera operator Bret Allen, SOC leapt into the manufacturing world after a phone conversation with an Arriflex rep. Frustrated by the high prices gear heads commanded on Ebay (used Mitchell or Mini-Worrall heads never sold for less than $10,000), he called Arri and asked the price of a new Arrihead. “About $42,000,” said the rep in a thick German accent. “You should order now as we only make two a year.” A year later he, his business partner Joe Mendoza, and their company Gearnex are bringing a low cost gear head to market that is perfect for small HD cameras like the RED. The pre-order price for the Gearnex gear head is $4,995, 1/8th the price of an Arrihead and about the price of a new O’Connor fluid head. Like RED, they intend to change the world by bringing quality film-style tools to the masses.

Bret and I spoke about this project a year ago when he operated for me on a solar energy project in Sacramento, and I’d not heard anything else until he got in touch a few weeks to say that he was considering showing prototypes at NAB. “Don’t stop to think about it, just do it!” I told him. “Even if it isn’t perfect, NAB is the place for ideas. You’ve got to show it.”

He did, and the response was tremendous. I opted to shoot some spots instead of attend NAB so it wasn’t until yesterday that I finally got the chance to play with Bret’s baby. I was shooting some tests at Chater Camera in Berkeley, and Bret graciously offered to bring a head down from Sacramento for me to look at. The minute I touched it I knew he was the right person with the right idea at the right time.

When a friend who’d attended NAB told me the Gearnex gear head utilized worm gears I have to admit I was skeptical. The only perfect gear head design I’d seen was that used in the Panavision Panahead and Arri’s Arrihead, which utilized rubber belts and rollers. The key to that design is that there’s no slack in the wheels: when you turn a wheel, no matter how slightly, the head reacts. Cable-driven gear heads such as the Worrall and Mini-Worrall can develop play where the wheels have to be turned a bit before they “catch” and the head responds, and I was concerned that worm gears would exhibit similar tendencies. Imagine my surprise when they didn’t.

The Gearnex head is very responsive. It has two gear settings, a high and a low, and they both feel about right. The most often used gears on a Panahead or an Arrihead are second and third gears, with first gear reserved for very subtle moves. Second gear is a good all-around setting, and third works well for fast, sudden moves. The Gearnex gears feel like second and third gear would feel on a bigger head. There is no slack in the wheels and the head is surprisingly smooth. It’s not quite as smooth as an Arrihead, but it’s plenty smooth for a small-to-medium-sized camera at 10-12% of the price. Bret assures me that they are working to make the head even smoother by the time it ships.

Just as important as the gearing is the size and feel of the wheels. The 6″ wheels are solid and well-balanced, and the handles turn smoothly and freely. It doesn’t feel like a small, inexpensive toy–it’s the real deal, and at a price that makes it accessible to just about everyone. 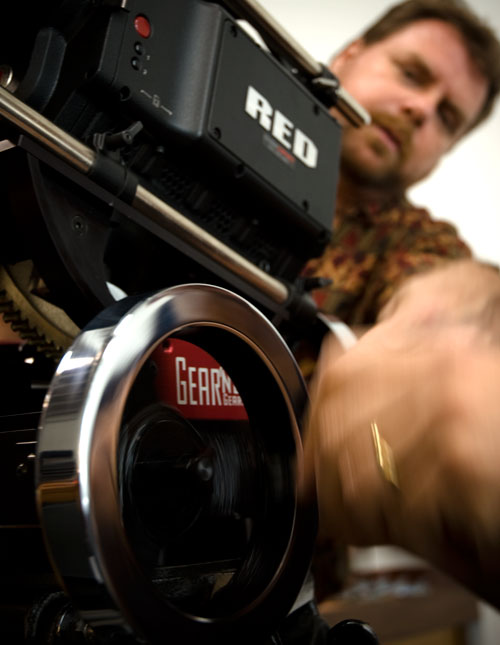 Gearnex is still six weeks out from having final products ready to ship. Thanks to feedback at NAB the head is being slightly redesigned to accommodate heavier and longer camera configurations. The position of the rear wheel is being lowered, and it will also be fitted with a hinge that will allow it to swing to one side in a fashion similar to the Arrihead. Several additional “secret” features are being implemented: the head seen at NAB is about 70% of what will eventually ship. I’m sworn to secrecy but if they are able to implement even half these new features this product is going to be a very useful and exciting new tool.

Bret tells me that Gearnex is in talks with HotGears about designing a remote control interface, and they are also talking with camera operator Mike Frediani, SOC about creating an “introduction to gear head operating” video tutorial that will ship with every head. They are also talking to vendors about additional items such as a tilt plate and eyepiece leveling systems.

Best of all, RED wants a couple of units for their showroom. It makes sense that the first low-cost 4k digital cinema camera would be paired with the first low-cost gear head. Both buck the trends by bringing serious filmmaking tools into the reach of serious independent filmmakers.

Look for the Gearnex booth at CineGear in June, and stop by for a test drive. It’s an affordable high-quality tool for operators made by an operator, and it won’t disappoint. Get it in snazzy red (as seen above) or in sophisticated artsy black.

Director of photography Art Adams is an active member of the Society of Camera Operators (SOC). His web site is at www.artadams.net.