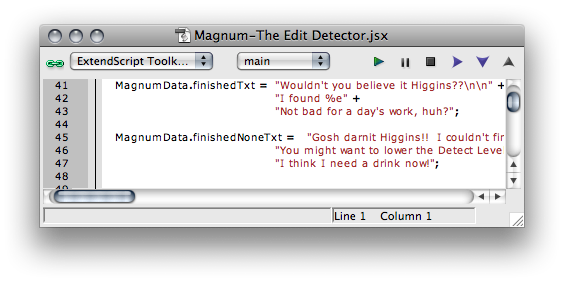 The After Effects development team is surprisingly small, especially given how much innovation has gone into each revision in the app’s 15 year lifespan (as of this past month – Happy Birthday, After Effects!). Like a Hollywood feature executive they can only greenlight a handful of great ideas each year.

That’s what makes a tool like Magnum part of what could be a sea change, if Adobe can figure out how to harness the energy of thousands of passionate and smart After Effects users. You may have heard about Magnum already: give it a single layer in a comp that has cuts and it figures out where they are, and splits that one layer into many. I used it this week to break down a client rough cut for shot organization prior to receiving their actual edit.

The thing is, cut detection is a supposed to be hard – Final Cut Pro has it, but unless I’m mistaken it’s restricted it only to captured miniDV footage. But Magnum’s author, Lloyd Alvarez, made use of what I knew would be a major addition to scripting once someone figured out how to do something useful with it: the sampleImage() method, which is the first expression command that can actually get pixel data. Magnum cleverly performs a series of Classic Difference operations between adjoining frames to analyze if the data change between frames is significant enough to indicate a cut.

Since Magnum is a script, I can open it, and when I did, I was stunned to find helpful comments on each line explaining exactly how the script works. Not only is Lloyd giving this thing away, he’s encouraging others to learn from his example, hiding nothing. Now if that’s not an example of the gift economy replacing the economics of scarcity, I don’t know what is. Lloyd gets to be considered among the smartest AE artist/developers on the planet, and Adobe’s community gets a new feature for free. So the question is, what can the next version of After Effects do to remove more of the obstacles between people like Lloyd and great ideas like Magnum?