The little camera that can was sponsor to my favorite racing series over the weekend. 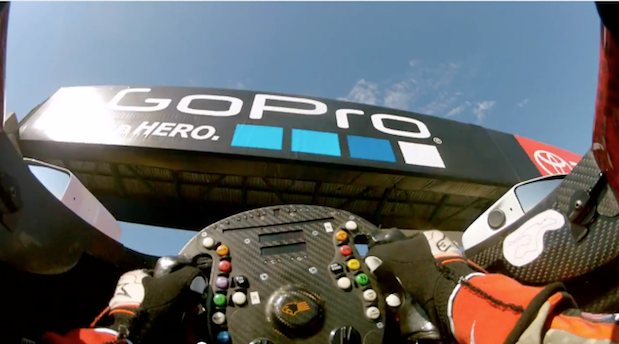 Everyone loves GoPro, makers of the very affordable, very rugged video, still and time-lapse cameras that have become a staple of extreme sports videos and any number of automotive related tv and video shows. The GoPro’s extremely small size coupled with its versitle mounting system means it’s easy to attach to nearly anything with wheels. The GoPro has also become a hit due to its very good picture quality relative to its size and cost. As an open wheel racing and IndyCar fan I was very excited when GoPro announced they were going to sponsor the Indy Grand Prix of Sonoma. The GoPro Course Preview was very impressive.

What really caught my eye while watching the race on Sunday was how the image quality of the GoPro cameras stood up in full HD during the GoPro Course Preview from driver J.R. Hildebrand. A lap around a road or street course is nothing new to an IndyCar broadcast. I’m not exactly sure what kind of on-board cameras are used during the broadcast but they are the same cameras that usually make up the preview laps during the race broadcast. When the NBC Sports Network cut to the GoPro Course Preview during Sunday’s broadcast it was obvious it had been captured with GoPro cameras as there was the distinct “GoPro look.” But the quality held up very well and they were able to get some unique angles that aren’t usually captured. It was one of the best course previews I’ve seen on an IndyCar broadcast. Though they have a multiyear deal to sponsor the Sonoma race it would be great to see the GoPro Course Preview become a regular thing.

This video is also a lesson in Internet delivery of broadcast television and exactly how interlacing can look on the web.

Below is GoPro’s official posting of Hildebrand’s course preview lap. It looks good in the embed below but for maximum quality click over to the YouTube page and watch it in full 720 or 1080 HD.

Compare that to the official YouTube post of the entire race. Embeded below is a TubeChop extraction of the course preview from the broadcast.

You probably won’t see any interlacing issues in the embed above but the key is to click the YouTube logo (just above the TubeChop logo) while the car is on the course as that will take you to that exact point on the full YouTube broadcast. Then click the gear icon to get the 720p stream and take it full screen. Interlacing abounds. That’s why you don’t want to put your client’s interlaced video on the web. IndyCar probably didn’t really have a choice for the full broadcast as it came directly off of television and tv is interlaced. But it’s a nice comparison exercise to see the difference.

Thanks GoPro for sponsoring the race! It was the best IndyCar race at Sonoma in years. Now how do I get a job working on this fun stuff?

And that cool image at the top of this post? That came from the GoPro Indy Grand Prix of Sonoma Teaser: