I’ve had a chance to test the GoPro HERO7 Silver and White cams in addition to the HERO7 Black and I’m sharing my observations and experience working with them all – plus some more stability testing.

I’ve had a chance to test the GoPro HERO7 Silver and White cams in addition to the HERO7 Black and I’m sharing my observations and experience working with them all with some comparisons. If you didn’t see my first Hands-on review with the HERO7 Black, please go read it here first.

GoPro HERO7 Black
With an affordable $399 price tag, it’s the most advanced, professional-grade GoPro HERO camera you can get. The built-in HyperSmooth Stabilization is a major game-changer for stability. In addition the option to shoot RAW photos, select intelligent HDR, or stream footage straight to Facebook Live, HERO7 Black is great for travel, Slo-mo, POV and time-lapse videography and anywhere you might want to stick an action cam for high quality footage that a DSLR and gimbal won’t work. It’s also the only HERO7 cam that has the front LCD info screen, which is handy for noting settings while mounted for a production. For indie productions and professionals alike – THIS is the GoPro you’ve been waiting for. The features in this camera far outweight the “savings” of either of the two less-expensive HERO7 cams in my opinion.

GoPro HERO7 Silver and HERO7 White
Still better than using you smartphone for quick, easy, HD POV video and stills. These are the cameras for you if you primarily share your experiences with friends and family or on social media, or never need to produce really high-end content, but more for just fun. For the beginner/hobbyist, they’re a little smaller than HERO7 Black, and very simple and intuitive to use—ideal for those looking to invest in their first GoPro.

At $299 & $199 respectively, the cost savings isn’t that much compared to the HERO7 Black – unless you’re using a lot of them on a production and only want a few seconds of video from a “crash cam” that gets destroyed.

The HERO7 Silver does have GPS & 4K capabilities and as you’ll see in my comparison testing below, the stabilization on the H7 Silver and White is still better than pulling out your old GoPros.

Here’s a quick comparison chart of the features and capabilities of the various GoPro HERO7 models:

Note that only the HERO7 Black has a removable battery and HDMI out port. The HERO7 Silver & White both have to be charged directly when the internal battery runs out, like a smartphone. This obviously limits their usefulness in a serious production environment.

You’ll also note that only the HERO7 Black has a removable lens cover for the addition of replacement covers or third-party filters.

If you’re editing in the GoPro Quick app, you can track your speed, distance, altitude, elevation gain and more—and add GPS Performance Stickers to your videos for an added effect. Since I’ve not edited much with the app (I always download my footage and edit in Adobe Premiere Pro) I don’t have any examples of this feature.

Using all three HERO7 cams for an HD montage composite shot doing some rough trail driving worked really well! I mounted the H7 Black to the roof of my FJ (with stabilization turned off so you can sense how rough this trail is), the H7 Silver mounted to the right side rear quarter and the H7 White mounted just behind the driver’s front wheel. Since all three cams are waterproof, no worries getting a good mud bath!

Since the only HERO7 camera that’s compatible with the GoPro Karma Grip is the Black I tried it out after some software & firmware updates on both the H7 Black and the Karma Grip (I’ve yet to test with the Karma Drone).

Here are some shots of my setup on the Eclipse Rover RPR: 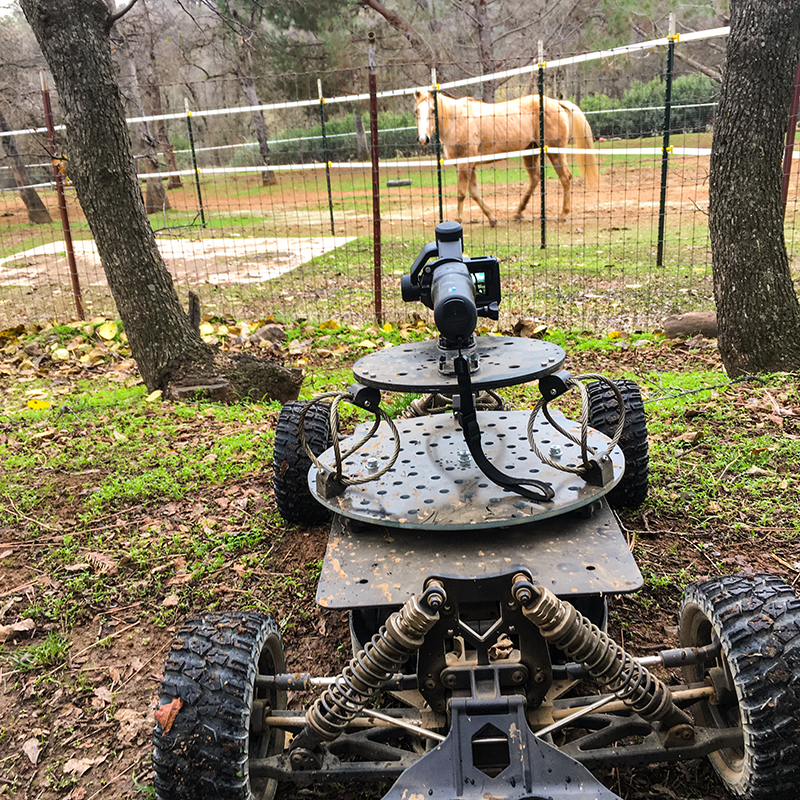 Unfortunately the Karma Grip disables the H7 Black’s stabilization so my testing trying to get a smooth panning from the gimbal and vibration stabilization from the H7 Black failed. I’m pretty disappointed that GoPro would do this – at least give us the option to turn it on manually after it’s attached to the Karma grip. 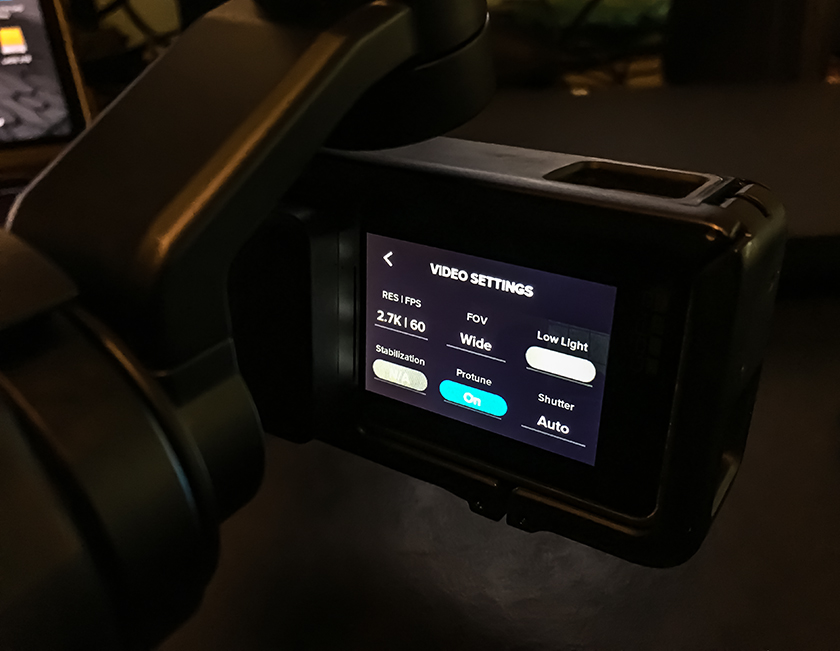 Here is some resulting footage of this test (Karma Grip gimbal stabilization only):

My friend and colleague Adam Simmons from Portland has a similar interest in POV cams and aerial videography/photography and found this FeiyuTech WG2 universal gimbal that works with the HERO7 Black (or any GoPro HERO) so you can get both physical and digital stabilization and vibration removal.

Here are his results testing with both the gimbal and camera HERO7 Black stabilization in various motions. You can see that the combination is really most effective to reduce vibration and allow smooth panning/movement unlike either stabilization technique alone.