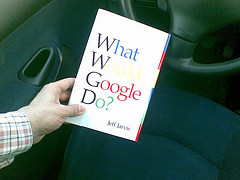 An unsubstantiated assertion I’ve seen repeatedly over the last months is that Google needs to acquire Twitter because Twitter knows what is happening (or what we’re thinking about) now, while Google can only look backwards. The latest version I’ve seen of this argument is from Jeff Jarvis’s post today, entitled “Why Google should want Twitter: Currency“:

Google isn’t good at currency. It needs content to ferment; it needs links and clicks to collect so PageRank can determine its value.

I grant thatPageRankisn’t good at currency. But Google doesn’t need to perform link analysis to know what people are thinking about in real time. Google can simply look at its logs to determine what people are searching for–and, in particular, which search terms and phrases are appearing with statistically significant frequency. And Google’s search volume is much higher (and more representative of the online population) than Twitter’s update and search traffic combined.

To be clear, you and I can’t perform that analysis using the tools Google makes available to the general public. But Google can–and I don’t see any reason, other than the fear of raising public concerns about privacy, that Google can’t exploit this data themselves.