Lighting isn’t a formula–unless you find one that works. Like this one.

In a recent article I wrote about how I like to fill from the key side, and I’ve since received a couple of requests for an explanation of what I’m talking about. 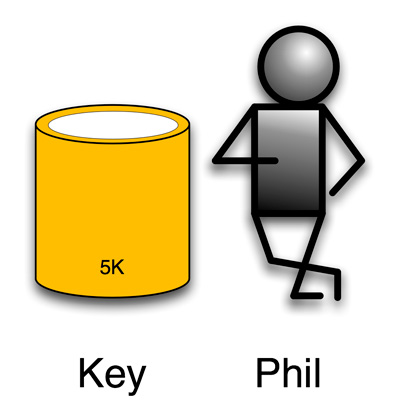 I first became aware of this practice about 12 years ago when I worked with a disgruntled gaffer. He’d been to LA for a few jobs and he wanted to do everything “the right way.” We ended up on a job together that was horrendously understaffed and his need to do everything “the right way” cost me a lot of lighting time, and him a lot of energy. One of the things he wanted to do “the right way” was to fill from the key side–and about this one thing I should have listened.

A few years later I day-played as an operator on the TV series “Nash Bridges”, then shot by DP Victor Goss, ASC. I noticed that he filled most of his setups from the same side that the rest of the light in the scene was coming from; for example, if the main lighting was coming through the windows to camera right, the fill would be a light through a frame of diffusion just above and to the right of my matte box. I couldn’t help but notice that the blending of the light sources was both beautiful and very practical, because he could soften and extend the wrap of any source this way. It seemed not only to be a beautiful way to fill a shot but also a fantastic method of damage control, because just about any kind of light could be made more palatable on a face using this method.

But enough talk. Time to draw pictures. Read on… 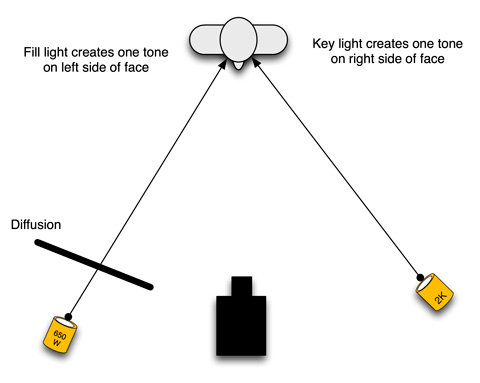 This is the traditional key+fill lighting setup. It works fine for most anything. But… for me there are two cosmetic problems.

First of all, this method only results in two tones on the face: a bright (key) side and a dark (fill) side. Boring. It works, but it can be a bit boring.

Secondly, if the key is too far around to the side of the face, there’s a spot on the inside of the nose on the key side that won’t get any light from either the key or the fill light. So it goes dark. Very, very dark. Which puts the darkest point on the face against the brightest side of the face, and brings a lot of attention to it. Blech.

There are plenty of times when I’ll use this technique, but I’m always looking for ways to do something a little different. Read on… 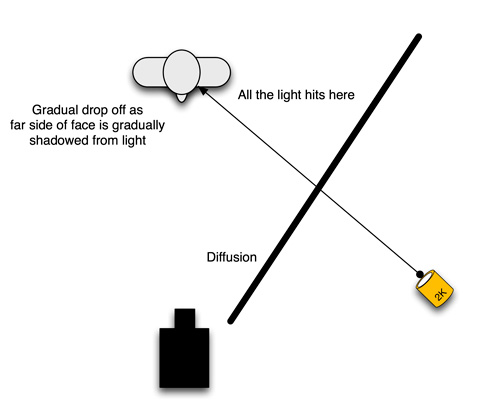 This is the classic “big soft source from the side” approach. I’m a fan of this, and I use it all the time. This technique results in a wide range of tonalities across the face and the soft shadow transition is kind to nearly everyone.

The reason it works is relatively simple to understand if you’re an ant. In your little ant body, take a little ant walk across our subject’s face–starting from the lit cheek and wandering to the dark side. On the lit side you can look up and see the full soft light source, which means all the light from that source is hitting you. As you stroll across the curve of the face, however, you gradually see less and less of the source as you move around the the jaw or nose. The source doesn’t suddenly disappear, as it would if our subject was lit by the sun–a step or two around the bridge of the nose and your ant self would suddenly find itself plunged into shade–but the farther you stroll the less of the source you see. Eventually you’ve gone so far that you can’t see the source at all, but it took you a long time to get there.

Points on the face gradually get less and less light the farther around the curve of the face they are because they see less and less of the full light source. That’s what creates that beautiful soft light that we love so much.

But you didn’t come here to listen to me rave about big soft sources, so keep reading for the punch line… 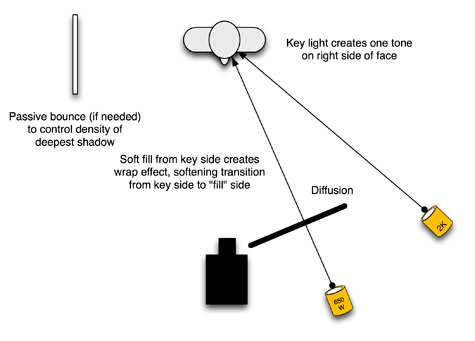 This is what you’ve been waiting for. You’ll notice that the fill light is on the same side as the key light–you’d probably guessed that by now–but what you don’t know is what that looks like. It pains me that I can’t find a still of a face in any of my recent work that demonstrates what’s going on here, so I’m going to try to describe it. (I’ve got a non-facial still to show you below.)

Essentially we’re continuing the wrap of the key light around the face. The key light may be hard or it may be soft, but it typically won’t reach all the way around a face unless it’s directly in front of a person. The fill light appears to extend the key, and since both lights come from the same side of the lens they’ll both drop off in intensity at a point on the far side of the face. Instead of just a bright side and a dark side, we end up with (1) key + fill, transitioning to (2) soft fill only, transitioning to (3) no light or ambient light. That’s at least three tones, and if your key and fill are soft you’ll probably get a few more.

Here’s an example: a person sitting next to a small window will get a lot of soft light through that window, but it won’t wrap around the front of their face because the far side of their face doesn’t “see” the window. But it will “see” a fill source next to the lens coming from the same side as the key light. The viewer doesn’t know the physics of the situation so they assume they are seeing the effects of a large soft source, not two smaller sources. 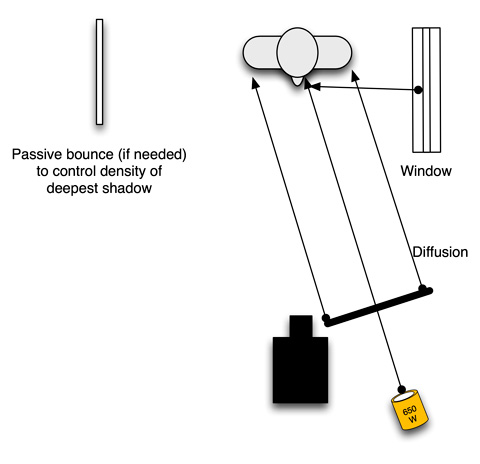 It could be argued that you are using multiple lights to create a “virtual” soft source. Instead of an 8×8 source maybe you’re using 2 2×2 sources because of space constraints. You’ll get a similar look to what you’d see from an 8×8 (not exact, but not terribly different) plus you’ll have the added benefit of being able to cut off the background the light that’s farthest to the side of the subject.

The trick is that the soft fill really needs to be very close to the lens in order to “blend” with the key source properly. An added benefit of this is that almost anyone looks great with soft front light coming from the lens, so even if your key is coming strongly from the side you can clean up some facial imperfections and reduce the harshness of the side light by filling with a soft source from the same side of the lens, and right next to it.

See the next page for an example… 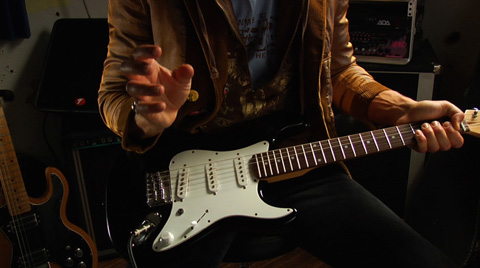 In this case, which is one of my favorite recent shots, the “key” is the light raking the neck of the guitar and the hands, and the fill is a 4×4 bounce from the right side of camera. Those two sources seem to blend together somewhat, and the big soft source near the camera seems to smooth things out. It feels very much like ambient light to me, but “smooth” ambient light. 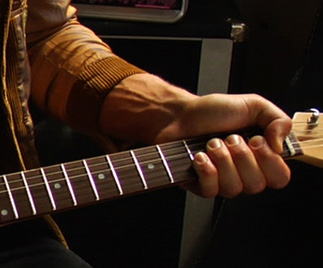 This shot is a good example: the bright part of the fingers is the key, the darker part is the fill, and then the left side of the fingers and inside of wrist just drop off. 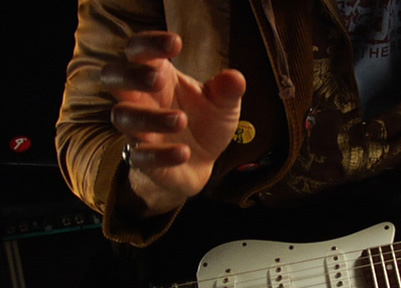 In this shot the palm is seeing the key and fill in the bright parts but only the fill in the darker spots. The backs of the fingers are facing away from both and go dark; I added a little bit of “skin shine” from a reflector to the rear.

I hope this was somewhat helpful. I’ve got lots of other lighting tips but I’m going to space them out a bit so I don’t run out of tricks too fast.