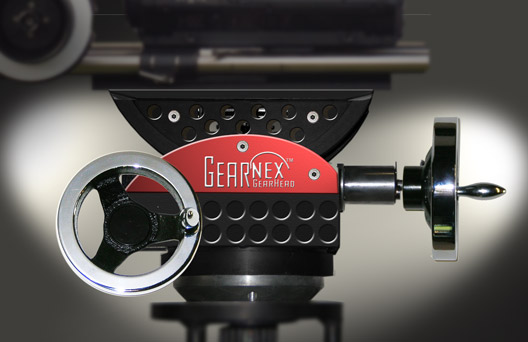 Last spring, while shooting a piece for solar energy company SunPower on the RED, our jib operator asked me to keep a secret. “How interested would you be in a low cost gear head for the RED? I think I’m going to build one.”

I’m a big fan of gear heads, although in my current niche of shooting spots and corporate short form projects in Northern California I don’t often have the opportunity to use them. When I was a camera assistant, and aspiring operator, I’d practice on the gear head at lunch following the art department around the set as they redressed it. I’d often been told to put a laser pointer on the head and learn to write my name on a wall, but I found that following people–who did unpredictable things–was much more useful.

Around that time I read a study where two basketball teams of equal skill were pitted against each other, and afterward they were told to practice in different ways in preparation for their next game: one team would physically practice, and the other would spend time visualizing plays in their heads. Both teams improved by about the same amount at their next game. So every time I watched TV I moved my hands as if they were operating a gear head, following the TV image. A few weeks of that and my hands knew which way to go, often without conscious thought.

When I was offered a job as an operator on a low budget feature I was ready and able to spin the wheels. I couldn’t do everything on a gear head, as I learned the hard way while trying to operate a long shot with a 200mm lens, but the moves I could do were very, very smooth and precise. (For 35mm film the rule of thumb is to use a gear head with lenses up to 100mm; beyond that, a fluid head is a much better option. That’s why the “A” camera generally has a gear head, for wide shots, and the “B” camera has a fluid head, for close ups.)

When I moved to Northern California in 1993 I fell into the corporate video world, and other than occasional trips to LA to operate on features or second unit I didn’t touch a gear head for years at a time. My last experience was on a corporate job about four years ago: the director loved gadgets, and when he learned that I could operate a gear head he ordered one for our next few projects. It was a lot of fun, working with an Arrihead and a Sony F900, and the director was blown away by the quality of the moves. He said it felt as if the camera was floating.

When operator Bret Allen, SOC pulled me aside last year and told me his plan, I asked him to keep me in mind when the time came for testing a prototype. We’d hoped to get together this week as the first production models came off the line, but our schedules won’t allow me to test his baby before NAB. If you get to it before I do (and if you’re at NAB then you probably will) please post your thoughts below in the comments box.

As far as I know, the GearNex Gear Head is the first of its kind to be designed specifically for use with HD cameras. It’s not heavy-duty enough for a Panaflex with a 10-1 zoom and a 1000′ mag but it’ll do fine with a RED, an F900R, Sony F35 or any other camera in that general size category. And it’s priced to be affordable for both rental houses and owner-operators.

For a GearNex Gear Head test drive at NAB, go to

Tell them you read about it on PVC!

Art Adams is a DP who used to spend a lot of time spinning his wheels. His web site is at www.artadams.net. He is an active member of the Society of Camera Operators (SOC).