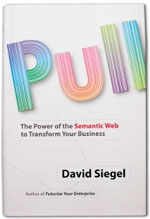 One of the first web design books I bought wasCreating Killer Web Sites, a 90s classic by David Siegel. That book was known for pushingvisual style over HTML standards. It also encouraged the use ofHTML hacks, for example using tables to create layouts. Siegel’s techniques were basically workarounds, but theyjust worked in an era when building web pages was painful due to browser incompatibilities.

Siegel’s definition of ‘Semantic Web’ is much broader than that of many technologists. So, just as many Web standards advocates derided Siegel’s version of web design back in the 90s, will they also cry foul of his version of the Semantic Web?

Pull is being positioned as a business guide to the emerging Semantic Web. It has similarities toCreating Killer Web Sites, which caught the wave of an emerging big trend of the mid-90s (web site design) and became a bestseller. Siegel is attempting to catch a second big online wave, with the Semantic Web in 2010.