We all keep talking about Final Cut Pro X

As if there’s isn’t enough Final Cut Pro X stuff out there on the web a week after its release, I want to pimp a couple of things that I’ve been involved in regarding Final Cut Pro X. First is the return of That Post Show (iTunes link) with a full edition devoted to FCPX and second is the FilmmakingWebinars.com Final Cut Pro X Hands On Tour. 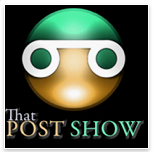 Last week I was happy to be involved in the return of That Post Show to the world of podcasting after a two year hiatus. That Post Show is the creation of Kanen Flowers of LifeZero (you may remember him by his original name John). I was involved in quite a few episodes when it was in regular production way back when and it’s good to have it back. The archives are online again and if you’re an Avid fan it’s worth listening to the Avid 3.5 episode now that Media Composer 5.5 is shipping.

The triumphant return of That Post Show was episode X that we recorded last week about Final Cut Pro X. Besides Kanen (who hosts) and myself there was also Paul Del Vecchio and Mike J. Nichols on the show. I think it was a good conversation that added some signal to the ever noisy FCPX discussion.

On Thursday June 30 at 10:00 AM PDT I’ll be presenting a Final Cut Pro X Hands On Tour webinar. This is a free 90 minute presentation where we’ll take a tour around the vastly different FCPX interface and answer some questions that I hope many have along the way. After all the brouhaha this week surrounding FCPX there are probably many unanswered questions so if you’re been wondering about FCPX and haven’t laid out the $299 then this webinar should be helpful.

To attend the live webinar is free. It’ll be available after the live event for $15. If you want the on-demand version plus bonus materials that include an audio podcast and bonus video then that’s $25. There’s also going to be some prizes given away including goodies from GenArts and SmartSound.

A couple of months before FCPX shipped we staked out this last day of June as our FCPX webinar date so we have sat with fingers crossed for quite a while hoping it would ship. Little did we know exactly what would end up shipping and the controversy FCPX would generate. This is going to be an objective hands on tour of Final Cut Pro X. We’re not going to pull any punches but it’s not going to be a bashing of the software either as there’s both good and bad in FCPX.

An overview of the new interface.
Where are my master clips and imported files?
To Viewer or Not To Viewer, that is the question.
Working in the new trackless timeline.
What are Compound Clips and Auditioning?
How does trimming and the precision editor work?
Is interfacing with videotape really gone?
Working with the mouse, working without the mouse.
Are there big, new features that weren’t demoed in the sneak preview?