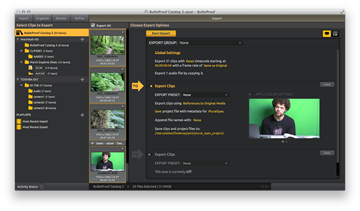 Today, Red Giant released BulletProof 1.2, an update that brings more camera support and other improvements to its footage backup and review tool.

BulletProof has been updated to support the AVCHD and Canon XF formats, two mainstays of the industry. In addition to the existing support for Canon and Nikon DSLRs and GoPro cameras, BulletProof now includes support for Panasonic and Sony DSLRs, and for the Canon C-series and XF-series cameras.

BulletProof is designed to solve several challenges that, since the DSLR revolution, have plagued shooters, both on set and right before post-production. One of those is the issue of simple, secure and reliable backup.

BulletProof, which boasts robust automated backup and verification tools, allows shooters to do what they are already doing, but with confidence. Once the camera card is in the card reader, BulletProof creates copies of your footage and verifies them to ensure a perfect duplication. In addition, while the footage is being backed up, the shooter can use BulletProof’s GPU-accelerated playback tools to review the footage and make sure they got the shots they need.

Also new to BulletProof is a highly-requested feature called “Add Mode” – a reference mode that speeds up the import process by cataloging media that has already been copied to disk.

While BulletProof's features start with back-up and review of footage on set, it also addresses the next area of pain in the shooter’s process – preparing the footage and notes for post-production. BulletProof includes powerful tools for tagging, adding metadata, notes, in and out points, and even suggested color correction to the footage – all to help bring the shooter’s intention over to the timeline. These features can be used right on set or once the shooter gets back to the edit suite.

In addition, BulletProof is now integrated with PluralEyes 3.5 (currently available as a free beta at redgiant.com), Red Giant’s automated audio/video sync tool. One of the editing industry’s most popular tools, PluralEyes literally saves hours or days of audio/video syncing work, with the touch of a button. BulletProof now makes the process even more fluid by sending the footage over to PluralEyes in an organized way, so that you can sync your footage immediately. Once synced, PluralEyes sends the footage directly to the editing timeline, ready for editing.

The combination of these two products together allow the shooter to work with the confidence that comes with knowing that their footage will make it home safe, sound and in sync.

Pricing & Availability:
BulletProof 1.2 is available now for $199. It is a free upgrade for existing users of BulletProof 1.0 and 1.1.

The Red Pledge
Red Pledge is Red Giant’s commitment to customer happiness, with no purchasing hassles. Learn about the Red Pledge guarantee at www.redgiantsoftware.com/redpledge/.

About Red Giant
Red Giant is a software company made up of talented artists and technologists who collaborate to create unique tools for filmmakers, editors, VFX artists, and motion designers. Our company culture is focused on finding balance between work and life – we call it “the double bottom line”  – this philosophy helps us ignore complexity in favor of building simple tools that yield giant results. Over the last decade, our products (like Magic Bullet and Trapcode) have become the standard in film and broadcast post-production – With over 200,000 users, it’s nearly impossible to watch 20 minutes of TV without seeing our software in use. From our experiences as artists and filmmakers, we aspire to not only to provide tools for artists, but inspiration as well. Watch our films, learn from over 200 free tutorials, or try our software at redgiant.com.