You’ve had some time to compare and contrast. Now is the time for a little resolution.

It’s time to name names. I’m going to tell you what lenses you’ve been looking at for the last few days, and offer my own impressions.

Disclosure: after several decades as a director of photography, I now work for ARRI, Inc. as Cinema Lens Specialist.

Last week, I posted this article and asked you to take a look at four lenses in a direct comparison: 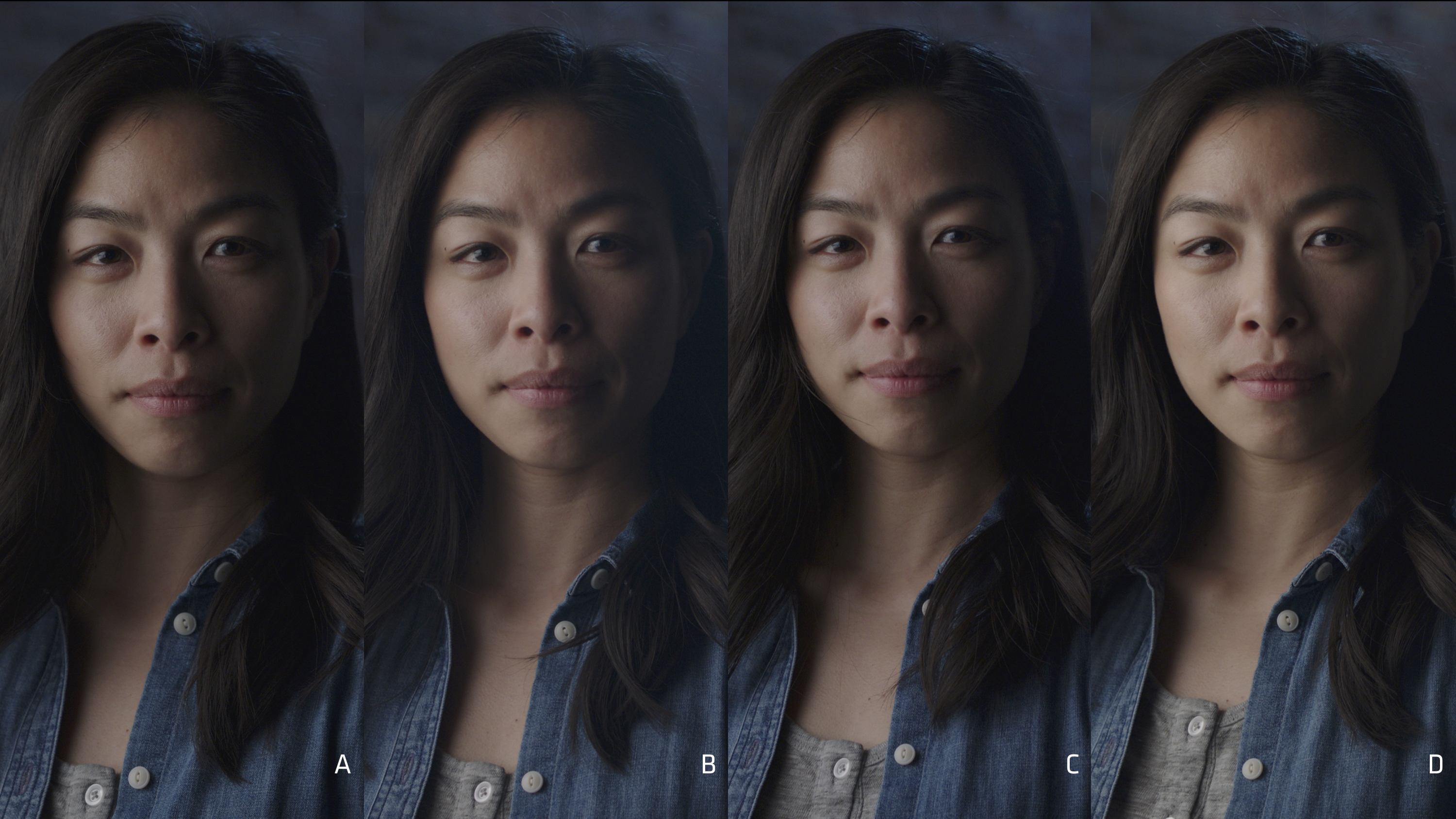 And now, the names:

Lens A is an 85mm Zeiss Supreme Prime.

The Supreme Prime is a classic example of a Zeiss lens. It’s contrasty and sharp, which emphasizes textures and resolution. Of the lenses in this test, this one emphasizes skin tone texture the most. It doesn’t show the deepest shadows (that award goes to C) but it’s close.

In the still world, a lens like this would be described as having “3D pop.” Many still photographers like to see a lot of high-frequency detail in their images as the texture makes them feel more “real.” Another description for this might be “high micro contrast.”

Micro contrast describes how quickly tiny structures in the image transition from bright to dark. It’s similar to photographic contrast, but refers specifically to fine detail such as clothing textures and skin. High micro contrast generally means such textures appear crisp and sharp, while low micro contrast means they appear soft and smooth. (“Micro contrast” is a poorly-defined term with no scientific basis, but it’s useful and we generally understand what it describes.)

Something to think about going forward: is this lens cool, or is it neutral in color?

This is, for me, the softest lens in the test. This is probably why it’s considered to be so flattering to actors: skin tone is very smooth. The shadows show a lot of detail, and it ties with lens D in this regard. Hair detail is not as crisp as on the Supreme.

What’s opening the shadows, though, appears to be flare. The fill side has a cool cast to it, which I think is flare from the mural in the background. I’ve seen this happen with other models of Cooke lenses (S4s and Speed Panchros) where soft sources at the edges of the frame can add a bit of veiling glare.

The Cooke reputation for being kind to actors appears to be related to how it handles high frequency detail and contrast. It could be described as having low micro contrast, as fine details aren’t rendered as crisply as in a Zeiss lens.

This lens has the deepest shadows of all four lenses. In the other lens images, I can see her ear on the fill side. On this lens, I can’t.

The Thalia can also be said to have high micro contrast, although not as much as the Zeiss.

This shouldn’t be a surprise, as I shot this test to try to quantify where it falls in relation to the others. I have a lot more to say about this lens as I know it the best, and I’ve also learned quite a lot about lenses in general by trying to quantify its qualities. So… if I sound biased, I likely am. That’s why I posted the images above, in the largest files PVC would reasonably allow. You’re welcome to your own opinions.

This lens appears warm, and—until recently—that’s what I believed. I’ve long thought that Zeiss lenses were neutral in color and that Cooke lenses were warm, but a chat with people who know better than I disabused me of this notion. According to them, Zeiss and Cooke lenses are actually on the cool side, while Signature Primes have the tiniest degree of warmth.

I think this is apparent in the images above. A, B, and C are all cooler by comparison. The Signature Prime is either objectively warmer (by design) or subjectively warmer (by comparison). Based on my observations, the Supreme seems to be the coolest. The Thalia is cool but less so than the Supreme. The Cooke is the closest to neutral, but still a touch on the cool side. The Signature Prime is either neutral or slightly warm. The best place to look for this coolness is in our model’s lips, which the Signature Primes render as a warm red, but the other lenses show as a cooler, duller red.

In a separate test, I shot color charts with an ARRI/Zeiss Master Prime, a Cooke S7, a Leitz Thalia, and an ARRI Signature Prime. At 3200K preset on an ARRI camera, I saw that the other lenses were slightly blue or cyan, and the Signature Prime showed a hint of yellow. This may be why the skin tone seems to pop so nicely.

The other reason skin tone pops is because Signature Primes appear brighter than the other lenses by about 1/3-1/2 stop. This is consistent across the entire lens line. In my tests I’ve seen other lens types that are consistently dark by comparison, so there does seem to be some variability in how lenses are calibrated. I don’t yet have an explanation for this, but we generally do things right (ARRI is a hard-core engineering company) so I’ll be curious to see how our methodology differs from that of other manufacturers. I do know we use the same calibration machines that everyone else does.

The Signature Prime shadows look to be as open as the Cooke S7, but I don’t see any obvious flare. I certainly don’t see the same blue-tinted veiling glare on the fill side. I’d say this lens can be described as having moderate micro contrast: it captures very high resolution images, but renders that detail in a very natural way that’s not sharp or soft.

In general, my overall impressions are:

The ARRI Signature Prime is the warmest, or the least blue, depending on your perspective. The Cooke S7 is second up in the warmth category. The Leitz Thalia is cooler, and the Zeiss Supreme is coolest.

The Cooke S7 is the softest lens of this group. The Zeiss Supreme appears to be sharpest, likely due to contrast. Her hair doesn’t seem as finely resolved as I see in the ARRI Signature Prime, but the lens feels sharper, and that’s likely due to higher micro contrast.

This comparison was certainly a bit of a surprise. I hope you found it as informative as I have.

Art Adams is Cinema Lens Specialist at ARRI, Inc. He can be reached here.