Folksonomy (also known as collaborative tagging , social classification, social indexing, social tagging, and other names) is the practice and method of collaboratively creating and managing tags to annotate and categorize content. In contrast to traditional subject indexing, metadata is not only generated by experts but also by creators and consumers of the content. Usually, freely chosen keywords are used instead of a controlled vocabulary.[1]

Folksonomies became popular on the Web around 2004 with social software applications such as social bookmarking or annotating photographs. Websites that support tagging and the principle of folksonomy are referred to in the context of Web 2.0 because participation is very easy and tagging data is used in new ways to find information. For example, tag clouds are frequently used to visualize the most used tags of a folksonomy. The term folksonomy is also used to denote only the set of tags that are created in social tagging.

Typically, folksonomies are Internet-based, although they are also used in other contexts. Folksonomic tagging is intended to make a body of information increasingly easy to search, discover, and navigate over time. A well-developed folksonomy is ideally accessible as a shared vocabulary that is both originated by, and familiar to, its primary users. Two widely cited examples of websites using folksonomic tagging are Flickr and del.icio.us, although it has been suggested that Flickr is not a good example of folksonomy.[2] See the external links below for numerous examples.

As folksonomies develop in Internet-mediated social environments, users can (generally) discover who created a given folksonomy tag, and see the other tags that this person created. In this way, folksonomy users often discover the tag sets of another user who tends to interpret and tag content in a way that makes sense to them. The result is often an immediate and rewarding gain in the user’s capacity to find related content. Part of the appeal of folksonomy is its inherent subversiveness: when faced with the choice of the search tools that Web sites provide, folksonomies can be seen as a rejection of the search engine status quo in favor of tools that are created by the community.~ Wikipedia 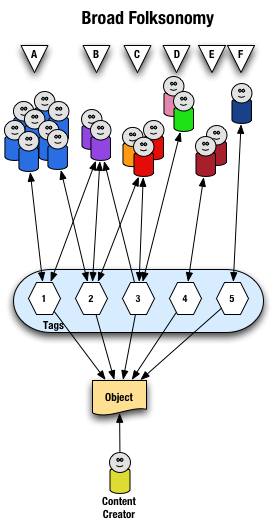