Crap hotel and a pandemic: what else could go wrong? 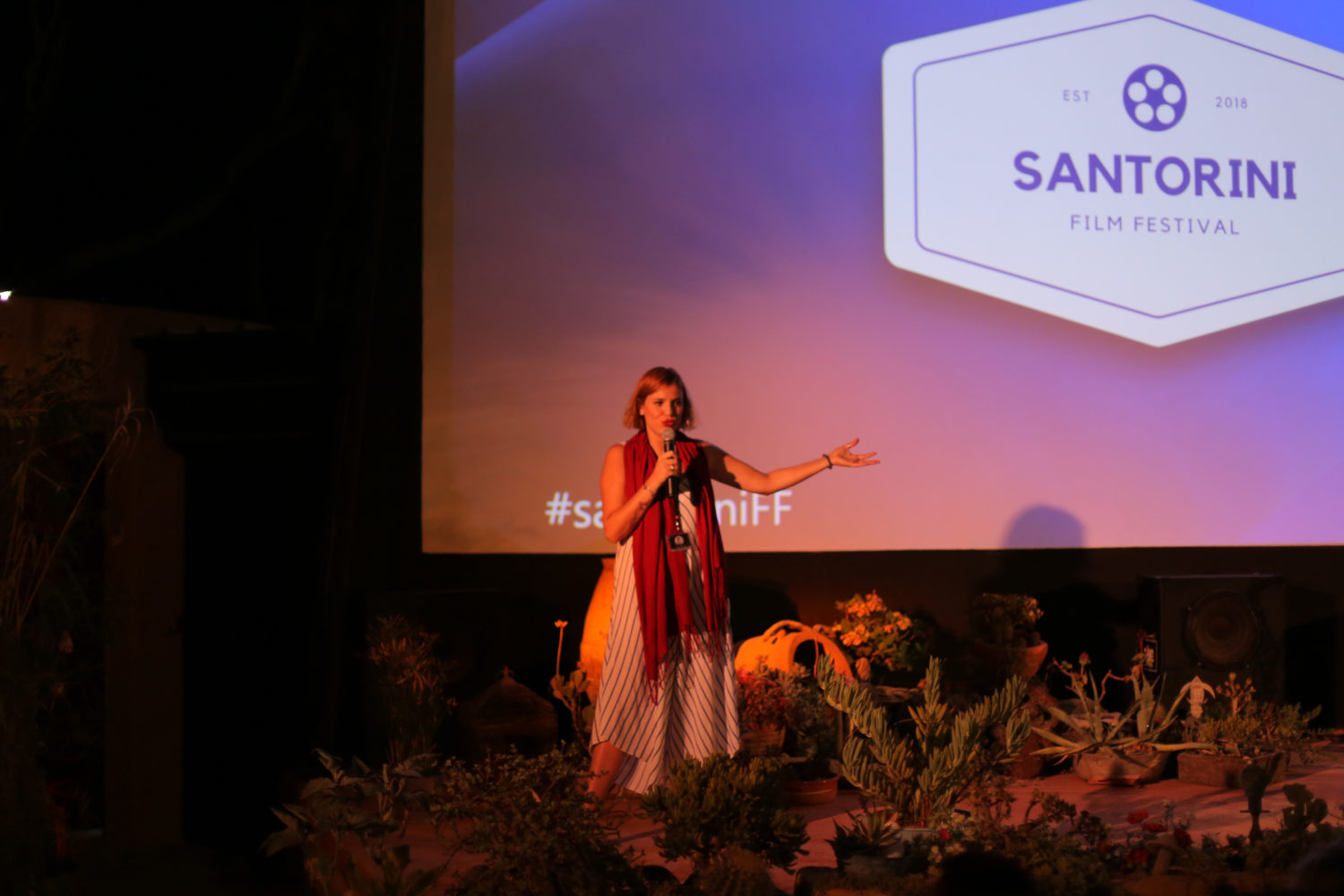 Film Festival Mayhem. What’s a Filmmaker to do? 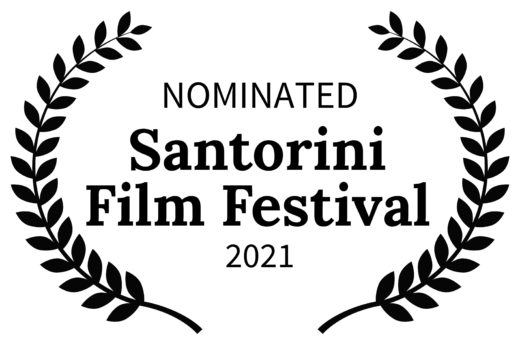 Why go to a film festival or competition? Filmmakers submit their films and screenplays to film festivals and competitions for many reasons. Sometimes it’s the prestige or prize money. Sometimes it’s the coverage notes that come back that help illuminate the path forward. Other times it’s the opportunity to network and make connections. Filmmakers often work in their own silos and being able to connect with other filmmakers as well as potential buyers or distributors is a huge bonus. Then there’s the great press that being a Finalist or Winner contributes to a PR campaign. (I was once told that producers love to see those little laurels on posters). And sometimes (for those of us with Wanderlust), it’s located in a particular part of the world one has always wanted to visit.

Let Me Count the Ways 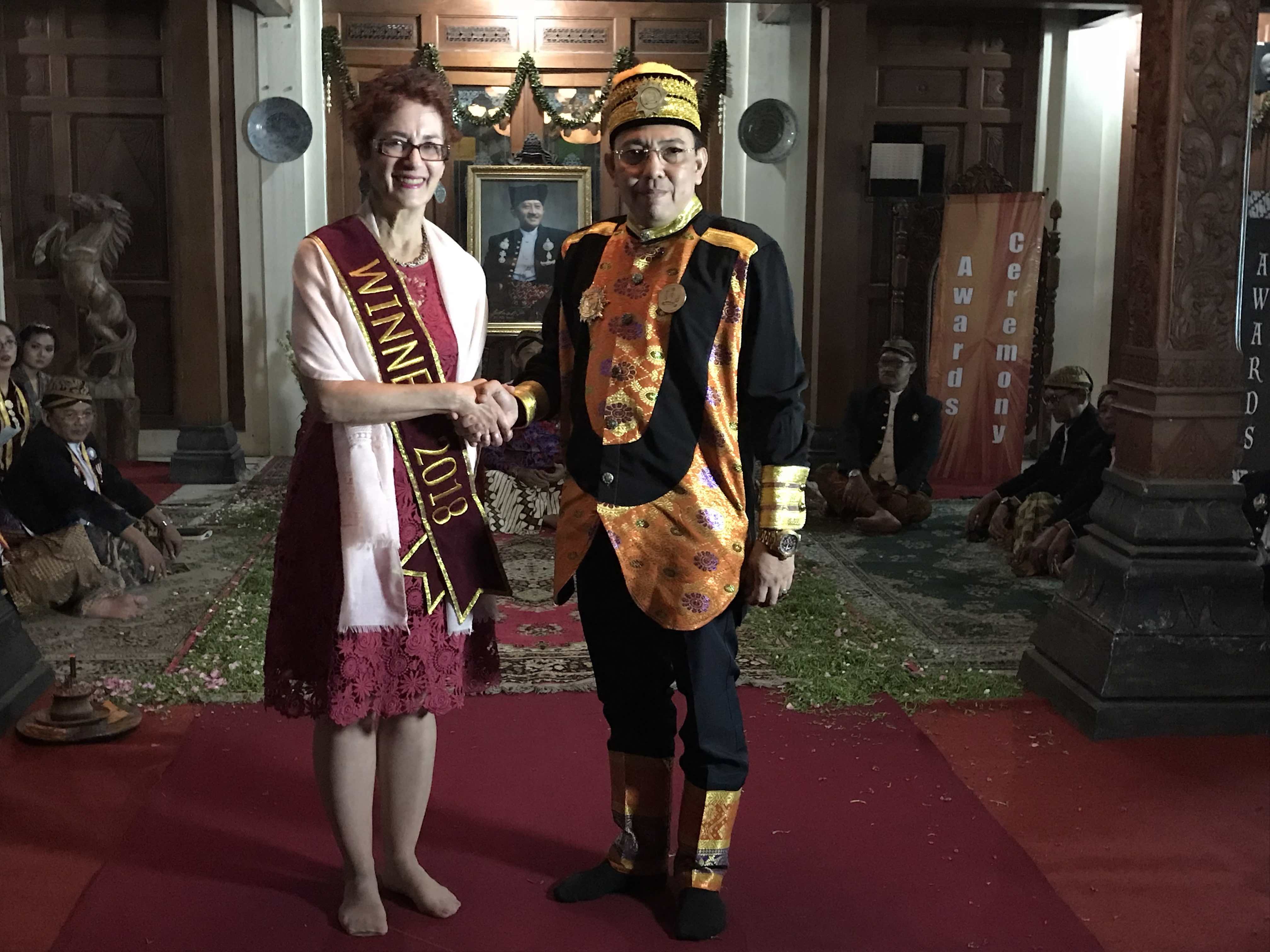 I usually make my decision on whether to attend based on all of the above factors. In one case, the Jogja Int’l Film Festival in Indonesia in 2018, I had won Best Screenplay for The Bride’s Wedding, a feature film (as-yet unproduced) based on my father’s life story. My decision to attend the festival in person was very influenced by their description of being able to meet and visit with the many Queens and Kings still functioning in this island nation in the South Pacific. What an opportunity I couldn’t miss! It was an incredible few days, and I did manage to get in some networking while the rich cultural experiences shown to me by the festival just couldn’t be experienced any other way.

The past informs the present 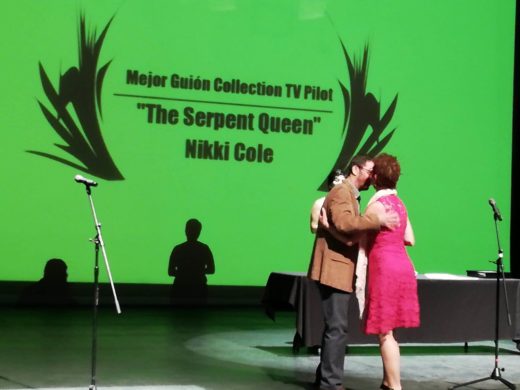 In 2018, after winning Best Screenplay for The Serpent Queen in Oaxaca, Mexico (another amazing cultural experience), I was told about a magical festival called Santorini. A colleague whose eyes glistened over as he described it, advised that if I ever had the opportunity to attend it, I should absolutely do so.

So when we received notice that the screenplay for another feature film The One You Love by Jagjiwan Sohal, had scored Finalist in Santorini’s first live, in-person festival since the pandemic descended, I jumped at the opportunity to attend, to be followed up with the first live in-person Series Mania Market in France a few weeks later. Both events promised to provide a safe, secure atmosphere for their attendees. 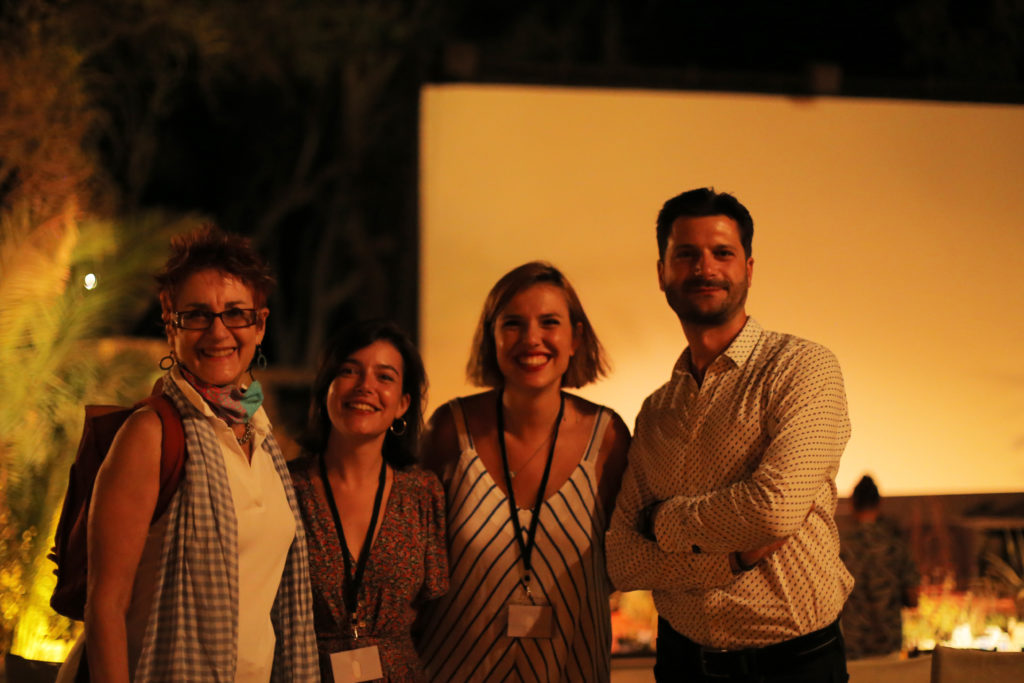 Network the night away

The 4th annual Santorini Film Festival did not disappoint. The magical atmosphere and warm welcome given to all attendees under the star-filled skies on such a beautiful island was very impressive and enjoyable. Given the Covid protocols and small size of the festival very capably run by Kleio Kenanoglou and a group of volunteers, they could only concentrate on a one-day event with restrictions in place.  I was pretty much on my own for accommodation choices, any kind of exploring (some festivals organize tours), and finding my way around the island. We didn’t win but it was still wonderful to be a Finalist amongst so many great films and screenplays. I did manage to network a little, although there were only two visiting filmmakers including me! I did meet some wonderful audience members, though, and really enjoyed hanging out with them.  Who knows, maybe they’ll turn up for my future screenings if they can 🙂 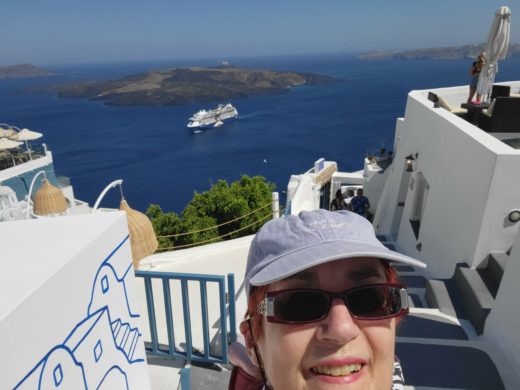 I thoroughly enjoyed my two-day explorations of the island. I used local buses – always fun to get a sense of the people. In this case, the buses (and everywhere else in Santorini), were packed with European tourists – happy to be free after 18 months of lockdown and not intent on masking up or social distancing AT ALL. So – halfway around the world – I found the same thing and here I was playing dodge ‘em once again. The views from the Caldera in Thira were astonishingly beautiful and I’d like to go back when it’s out of season and crammed with tourists to fully take it all in.

Some tips and pitfalls to avoid:

Be sure to research, check reviews, arrival protocols (especially during Covid!). Get recommendations and be flexible and ready to adjust to big and small cultural differences from where you come from. Try to learn some words of the local language if at all possible.

I was traveling on a very small budget so I chose a medium-priced hotel which was a 4-minute walk from the amphitheater. This eliminates the need for a car  or taxis and I always try to take local transit wherever I go. In the past, this strategy has worked out very well. In this case, not so much! 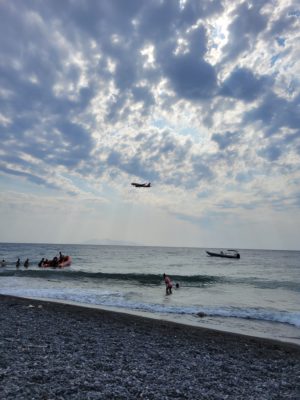 Unfortunately, the long, parched wait in the hot sun for the promised hotel driver, only resulted in several long-distance phone calls (it was 10 minutes away) and was the harbinger of one of the worst hotel experiences of my life. Thankfully it was only for a few days and I managed to survive drinking water I shouldn’t have (no warning from the hotel), non-functioning wifi and TV, being yelled at whenever I tried to bring anything up, and being misinformed (and again yelled at) so I almost wasn’t able to get a drive to my very early flight out of Santorini. So always check as best you can about everything – and then do your best and remember to breathe and laugh! S**t always happens.

Travel with a buddy if possible. I actually really enjoy traveling by myself – simple, straightforward and totally on my own terms. In some cases (like this one), it might have been good to travel with a friend who could have helped me navigate the many hotel negatives with a smile on my face. When I attend longer festivals and markets by myself, I often hook up with other filmmakers to either stay together or at least meet up during the events. It helps to form a ‘posse’ to navigate the ups and downs and share information and tips learned along the way.

Such was the plan for the next stop on my journey: a 2-week writing retreat in Amsterdam and then on to the Series Mania Market in Lille, France.