There are some killer new features in DaVinci Resolve 14. The buzz around Resolve at NAB was pretty evident. Yes, I was on the stage showing some of these features, and I could see when eyes were lighting up in recognition of something big while I was showing off these things: 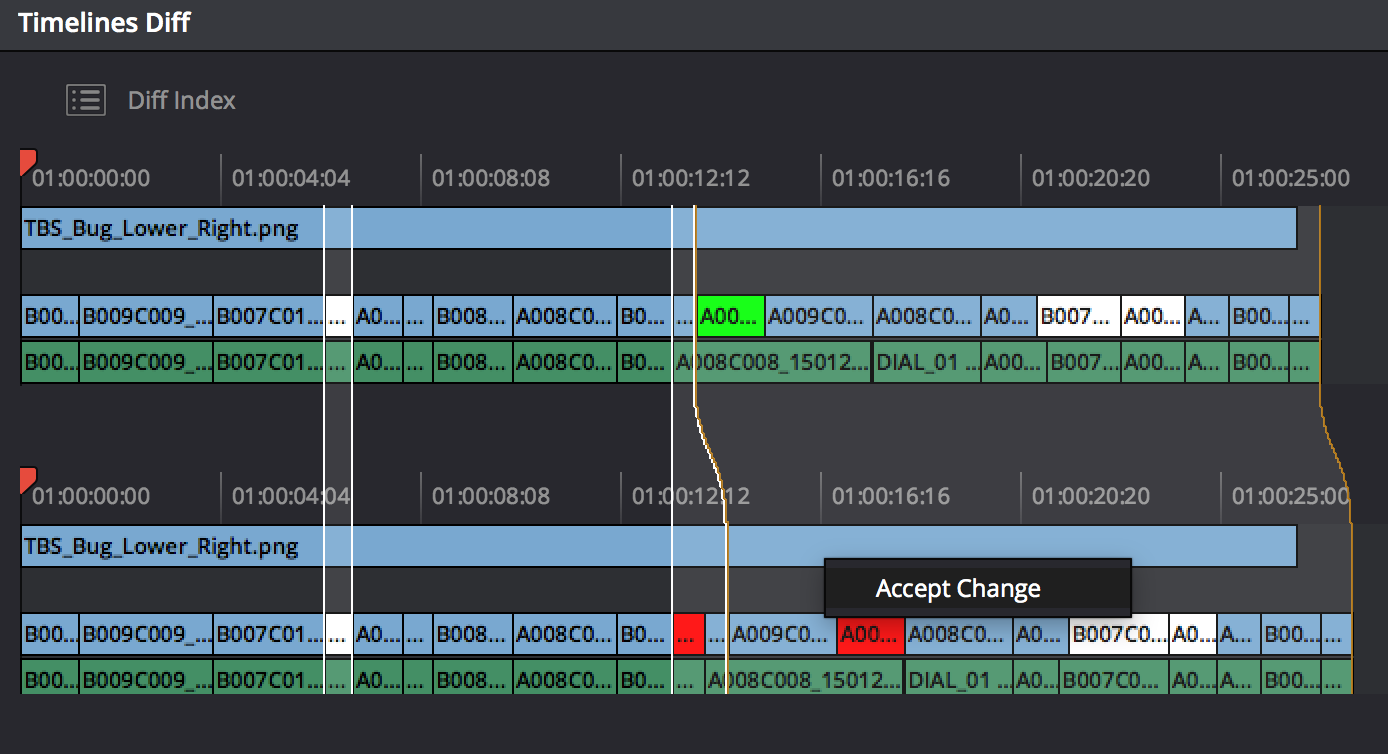 Without the need for an expensive hardware solution, Resolve 14 allows a collaborative workflow between specialists, all using the same app and project and media. I’ve heard some Resolve owners complain that the app makes us “jack’s of all trades and masters of none” but I beg to disagree. The thought process here is NOT for one person to do everything, but for specialists to be able to collaborate all in a single app. That app is not “dumbed down.” The app just means that the timeline is passed from specialist to specialist with the click of a button. No XML exports. No re-linking. No imports. No “dynamic linking.” Just a single app that almost does it all. Each portion of the app working at a completely professional level.

There is bin locking to prevent collaborators from “stepping on each other.” There is sequence locking for editors but for colorists, the sequences are shared and just individual SHOTS are locked. That’s pretty cool.

Work is always saved Live. So instead of an auto-save function that interrupts the user, every single action is saved. This also means that if you crash, you go back to the EXACT same spot where you left off. Please think about this. This is huge. No lost work. And since they’re releasing this as a public beta, this is a good thing. Resolve is making no bones about telling potential new users that at this time, the beta is really pretty “beta-y.” Crashes may and will occur. I have had very few crashes, but I’ve seen some for sure. It’s about as stable as most early betas.

The built-in chat function is very cool, allowing collaborators to have secure ability to “text” each other INSIDE the app.

The new “compare timeline tool” is an insanely cool graphical interface that shows the changes made in an edit, allowing one version of a sequence to be compared against another version, including an index of changes and the ability to approve or deny the changes. The approved changes are then automatically added to the “main” version of the sequence. This is killer! There are some bugs to be worked out in this feature for sure, but just to see the interface is awesome. If you don’t quite get it, but have used Microsoft Word for editing text documents, it’s similar to their ability to compare two documents, which is incredibly useful, and the ability to approve or deny the edits that someone else has made in your document. So powerful! 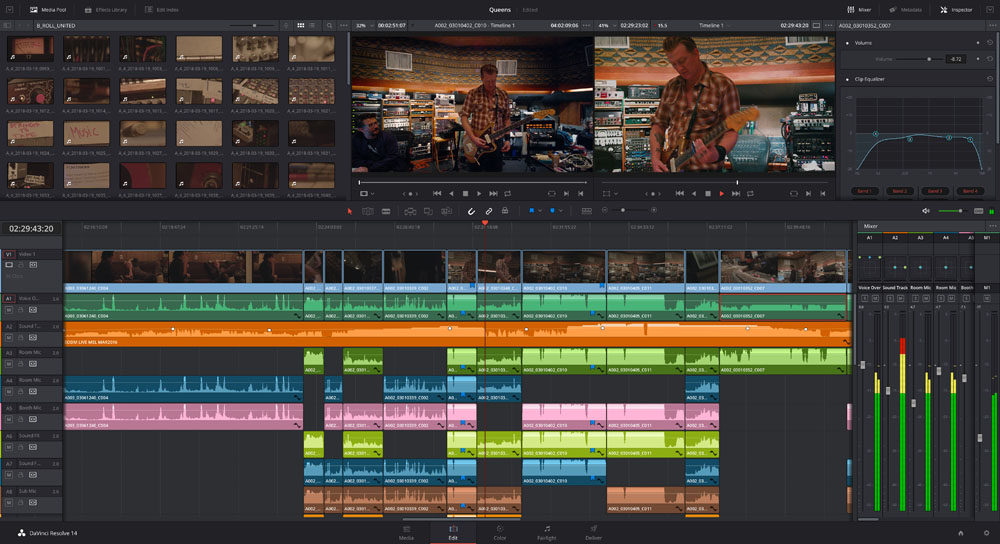 This is really important, though it’s kind of hard to pat Resolve on the back for something that really MUST be there in the first place. Basically the playback of footage has been improved from the last few releases, where it was, frankly lacking. Even H.264 plays back really well. One of the few FCP-X feaures I am impressed with is the buttery smooth way that you can look through material quickly. Now Resolve has this same feel. Also, I had not been impressed with the latency between pressing a button, like JKL, and the response of Resolve in previous versions. That has been completely fixed in this version… necessarily so, of course. 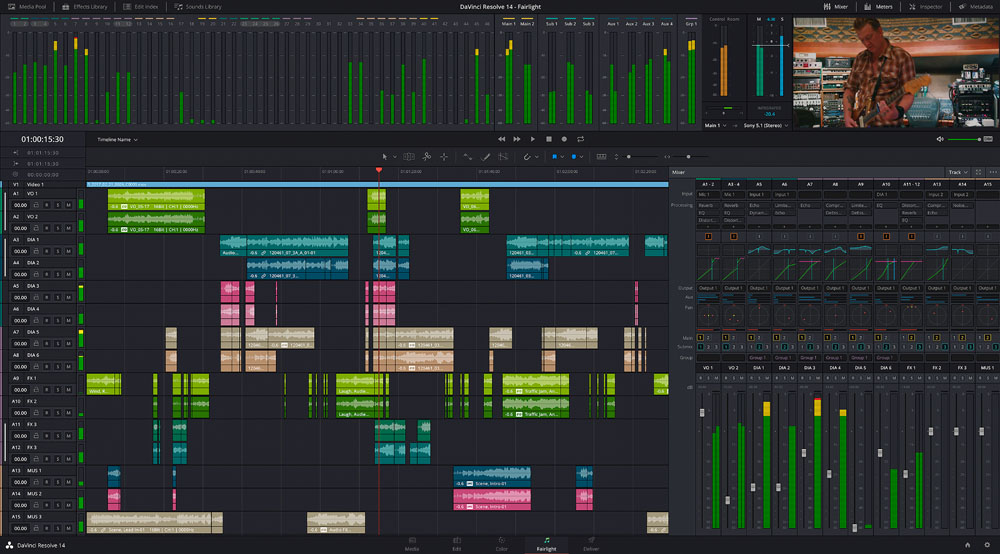 The last couple versions of Resolve, it was pretty obvious that audio was lacking, but they responded to this in a pretty spectacular way. Most people saw it coming, I think, after Black Magic bought Fairlight, but to incorporate the Fairlight interface wholesale into the Resolve interface is pretty spectacular. For editors unfamiliar with Fairlight, it’s probably the best-known digital audio workstation in audio post next to ProTools and ProTools has always been more music-oriented while Fairlight was always designed more as a post-production tool for film and TV anyway. Just like the Resolve color grading tools, it’s more power and control than most true picture editors will be able to use fully, but again, I don’t think that’s the intent. I think it’s just meant to allow seamless integration between specialists – one of them being a talented mixer. This calls into focus the sorry state of integration between ProTools and Avid Media Composer. Honestly there are a host of features in Fairlight I don’t even understand. Of what I DO comprehend, probably the bussing ability (obviously, not a new feature to Fairlight users) is probably my favorite. Most Media Composer editors have wanted the ability to send groups of tracks to a single buss for one-track control of the group. Fairlight has that ability in spades.

I love the ability to “bulk name clips” using a naming formula. So, instead of individually naming a bunch of clips in a bin, you can select them all and use metadata to create what Resolve calls a “display name.” This allowed me to name 100 clips with full scene, camera set-up letter, take and description in about 10 seconds. You can create a formula (similar to making a formula in an Excel spreadsheet that uses a formula to calculate a number for a field) to create a name, so by typing S%, Resolve will ask you what metadata you want the % to stand for. In this case, you get a pulldown menu and you can assign the Scene # to be pulled from the metadata for each individual clip. Continuing in this manner typing something like “S%%_Cam%_t%_%” could yield the clip name “S01A_CamA_t1_CU” with each percentage sign pulling metadata for the scene, setup, camera (A or B or C), take and description of the shot. All of this data is commonly available from either the camera itself or from the sound team, so why not use it?

Also, I love the fact that the “Compare Timelines” feature be used, not only in collaborative environments, but to compare an editor’s own versions of sequences. So if you’re trying to understand or remember the differences between versions of a sequence, you can use this feature to get graphical feedback. The UI is really an amazing sight. Plus you can call up the “index” to see a line-for-line list (similar to an EDL) of the differences between the sequences and you can play each sequence on top of each other to see the differences. Once you have this ability, it’s hard to go back to another NLE that lacks it. 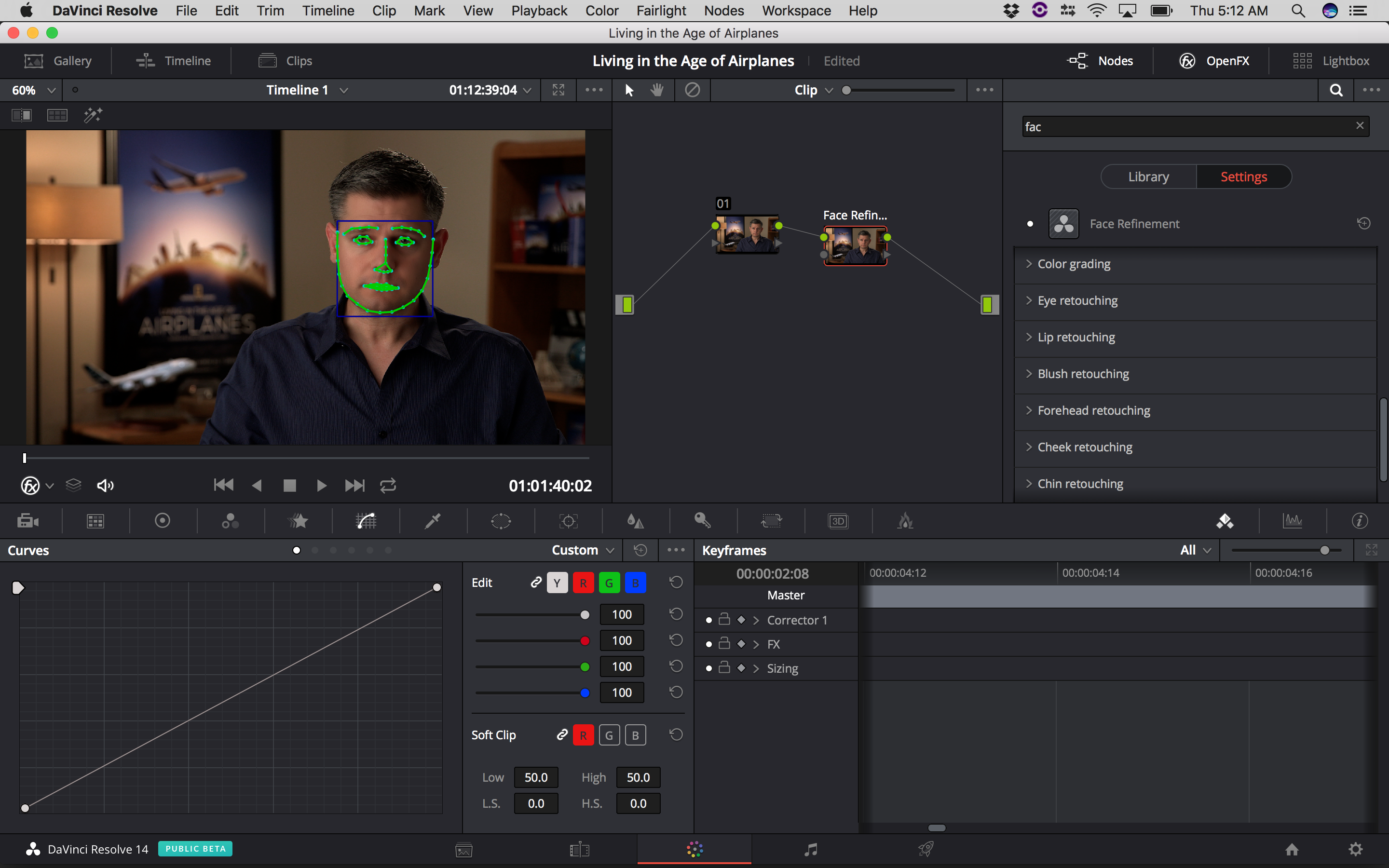 Though this is only available to the Resolve Studio users (paid dongle), to Face Refinement effect is such a killer feature. It analyzes an image and identifies and tracks the individual parts of a face. Then each component of the face can be worked on without the need to individually track and mask each part of the face. You have to experience this feature to believe it. It allows the skin to be softened or treated without affecting the important features like eyes, eyebrows, nostrils or lips. Eyes can be brightened or sharpened, wrinkles removed, lips retouched, eye-bags removed, dark brow shadows lifted, all with individual control with no masking or tracking necessary. I saw this taken to extremes by some users and it definitely needs to be used with a light touch or faces can get creepy fast. I met a guy who said he worked on “Chicago PD” and “Chicago Fire” where they have a team of six Flame artists, whose main job is doing beauty work of faces. Just the beauty work is something like 600 shots a week. This feature takes care of most of that work almost automatically – a slight exaggeration, but not by much. 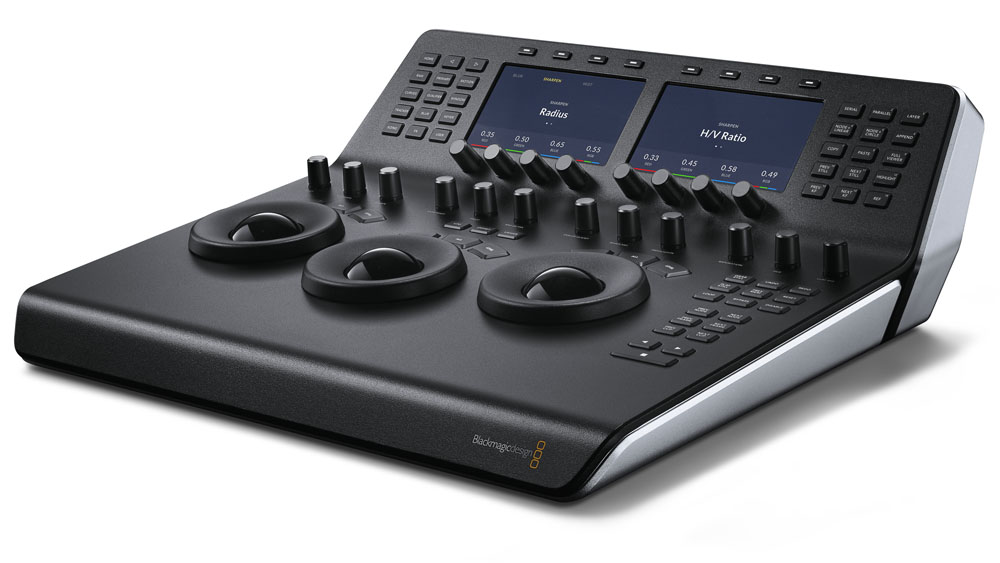 Of course, it’s hard to ignore the new Mini and Micro Panels. I’ve tried a lot of these panels – almost all of them in fact – and the new Black Magic color control surfaces are so buttery smooth with a fantastic, high-end weight to the controls. It really feels like you’re driving a high-end car. The machining and touch is great. The textile industry has a term for the feel of cloth called “the hand.” And the “hand” of these products is so nice. Everybody wanted to get their hands on them at the booth and at SuperMeet these were the cherished raffle prizes.

Out of a couple hundred improvements, these are just the things that stuck out to me as being outstanding and desirable new features. Noted post-production author, Mary Plummer, who was also at the Resolve stage demoing Fairlight, had a great quote: “This is like the flying car of post production.” I have to agree, though with a flying car, I might be a little more frightened of being in beta.

Dear FCC: I was not paid for this review, but I was a paid presenter for this software. While this may bias my opinion, the buzz at the booth and the people I spoke to certainly affirms the validity of this article.