A control surface for Apple Color can really increase your productivity 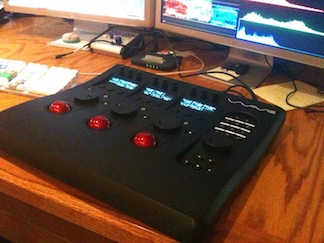 I was very excited when a big FedEx box arrived a couple of weeks ago with a Tangent Wave control surface for Apple Color. I had a series of short videos that I was soon to be cutting and finishing and I wanted to finally give Color the proper test it deserved. I haven’t been a fan of Color in the past, what with its non-standard interface (when compared with most Mac applications), difficulty moving an edit from Final Cut Pro to the app and back again as well as general buggyness. Those issues have kept me from using it, instead opting for Colorista (when in Final Cut Pro) for color correction duties. After speaking with Tangent Devices, they agreed to send a Wave control surface over for testing. Combine that with the recent 1.5 update to Color and I decided it was time to give the app another try. But this isn’t about Color but rather first impressions using the Wave with Color. 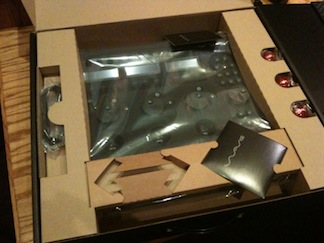 The Tangent Wave arrives in a large but thin box. The box has a handle so if you are a travel Color colorist you could conceivably take the unit with you from job to job. With the Wave’s simple USB connection it’s easy to hook up and use. Some other control surfaces connect via Ethernet so there is some setup via IP address that occurs when you launch Color. I haven’t setup via this method so it might not be difficult but I can’t say. The USB setup is very easy, basically plug and play. There is very little assembly required of the unit itself but you do have to pop-off the plastic bezels that hold the trackerballs in place and install the red trackballs. That takes all of about 30 seconds. The function buttons, jog wheel and transport controls are in the recessed area on the right and Tangent supplies a single overlay that you can use to label the function buttons.

Despite what the user manual says there was no driver to install on the supplied disc. In fact the only file on the disc was the user manual. The current driver for the Wave sits at version 1.9 and this can be downloaded from the Tangent support page. Once the driver is installed and the Wave is plugged in you launch Color and select the Tangent Wave Color PlugIn v1.9 from the popup menu: 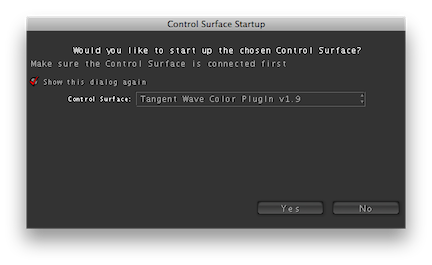 The Wave display will show the connection:

I was up and running in just a few minutes.

The Wave is a large device. The dimensions are about 18 inches wide and 16.5 inches deep: 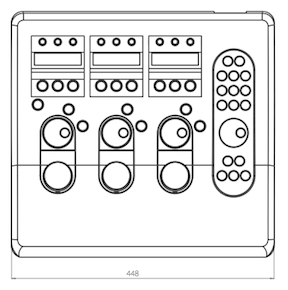 The height is about 2 inches at its highest point. The device is appropriately named Wave as the unit has a unique wavelike shape:

Upon first sitting down with the device one might think that is isn’t very ergonomically designed. The trackballs are on a slight reverse angle (which seemed a little odd) and the first thing I did was look for some pop-out feet on the bottom to prop the unit up like a keyboard. It does not have these feet. But if you look at proper ergonomic recommendations for computer usage the keyboard is usually advised to be at a slightly backwards sloping angle. After I used the Wave for just a short amount of time I realized that the Tangent designers know a lot more about ergonomics that I do as it’s quite comfortable to use. 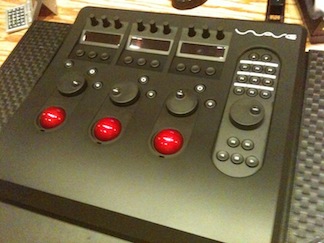 One comment that I’ve heard from some people who have used the Tangent Wave (or at least people who have seen and/or touched the device) is that it’s plastic and feels cheap. It’s true, the unit is made of plastic. But saying that it feels cheap is a relative criticism that is only really accurate if you’ve used other control surfaces. When compared to the control surface of our DaVinci 2K Plus is does feel cheap. But that’s kind of like comparing a Rolls Royce to a Buick. Both aim for luxury transportation but they are at very different price points aimed at very different markets. When comparing the Wave to the small control surface of our Quantel eQ it feels just as sturdy. If you’ve never used a control surface before then you will be very happy with the feel of the unit. It is a night and day difference between using a mouse to grade in Color and using the Wave to grade so it could be made of balsa wood and as long as it worked it would be an improvement in productivity over a mouse alone. 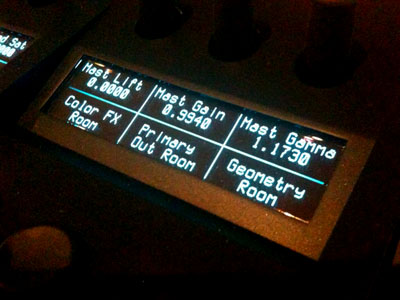 The only gripe I can see thus far is that the rotary knobs across the top of the unit can register a small change if they are bumped. They have just a tiny bit of looseness if I jiggle them from side to side and that can register a small fraction of a parameter change. Pressing these knobs straight down is how you reset their assigned parameters and as I take my finger off after resetting a couple of the knobs will register a tiny change. It feels like they need to be tightened just a bit. Other than that all the knobs, buttons and (especially) the trackballs have a smooth operation. There is a single overlay provided for the function keys on which you can write (or use labels for a more professional look) the button assignments. It might be nice if there was a second overlay provided. If the unit is used with different colorists then they might each have different button preferences.

Those are my initial impressions after using the Tangent Wave on and off for a couple of weeks. The biggest impression I have is how much faster and how much more pleasant the Wave makes the color grading task in Apple Color. I really feel like I can get better looks as it takes less time to experiment, tweak and move to new looks. It is a night and day difference between using the Wave control surface and using a mouse. In fact I’ll just come out and say it … using a mouse with Apple Color sucks after using a proper control surface.

Coming soon in the next installment of using the Tangent Wave: customizing the Wave Control Mapper software, learning the buttons and working fast.