iLoud Micro Monitor is another innovative yet affordable audio production product: powered reference studio speakers from our friends at IK Multimedia in Italy. 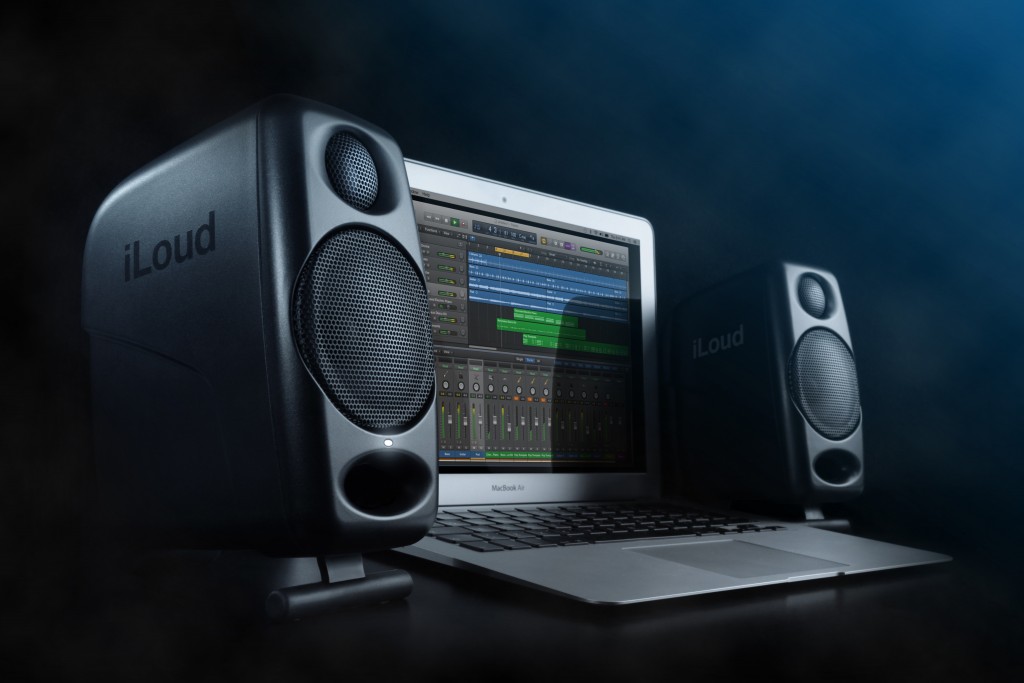 I am again honored to be among the first tech consultants/journalists to receive another innovative product from IK Multimedia to evaluate and review it. This time, it’s about the new iLoud Micro Monitor. What’s that? It a pair of affordable, compact, powered reference studio speakers that works either wired or wireless via Bluetooth A2DP. Powered reference studio speakers are vital for audio/video post-production to hear the “true” sound we are creating. For this first look, I used the wired connection, and I am impressed, both with what I saw on my desk and what I heard with my ears. In fact, the iLoud Micro Monitor even has a built-in DSP to compensate for imperfect acoustic environments.

As stated by the iLoud Micro Monitor’s creator, IK Multimedia, in order to hear the “truth” about our audio creations, we need reference speakers that deliver a linear frequency response, with transparency and headroom. 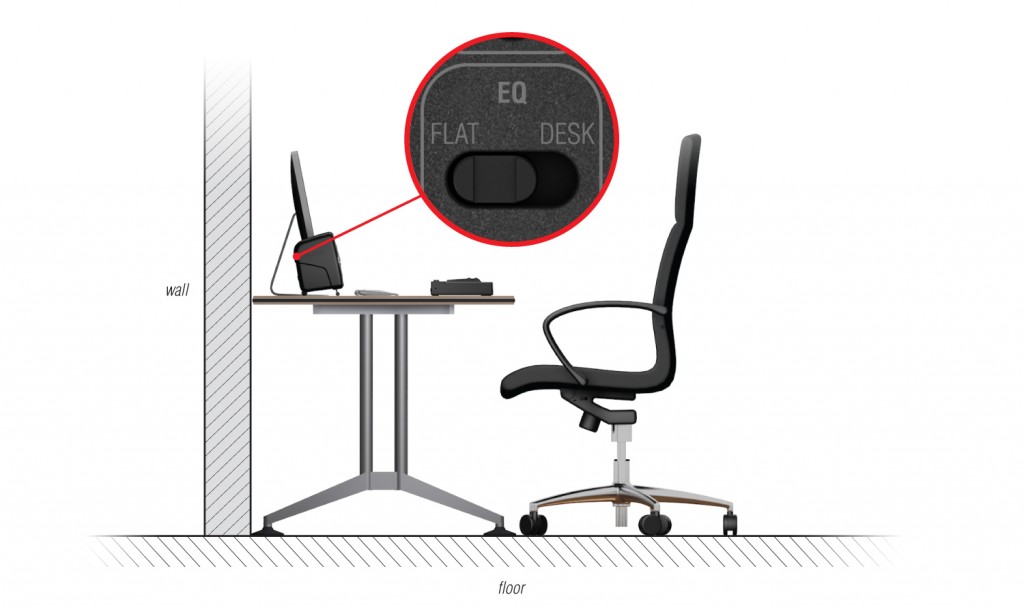 If we work in a home or small studio, we have even greater challenges, from the lack of space on our desk to the less than ideal position of our audio/video workstation, which is often placed against a wall.

According to IK Multimedia, with the iLoud Micro Monitor system, we can hear the “truth” in our audio in any acoustical environment. The company describes the iLoud Micro Monitor as the smallest active studio reference monitoring system in the world, made to give us ultra-accurate true linear frequency response with no coloration, and to do so in every listening environment, especially in home and project studios. I don’t have adequate equipment to measure and prove that alleged accuracy, but I can personally attest that with the iLoud Micro Monitor evaluation set I tested and then returned within 72 hours, I heard more detail in my audio playback than with any other powered speaker system I have ever had in my own studio to date. In fact, this is true when I listened both at low and high volume levels. 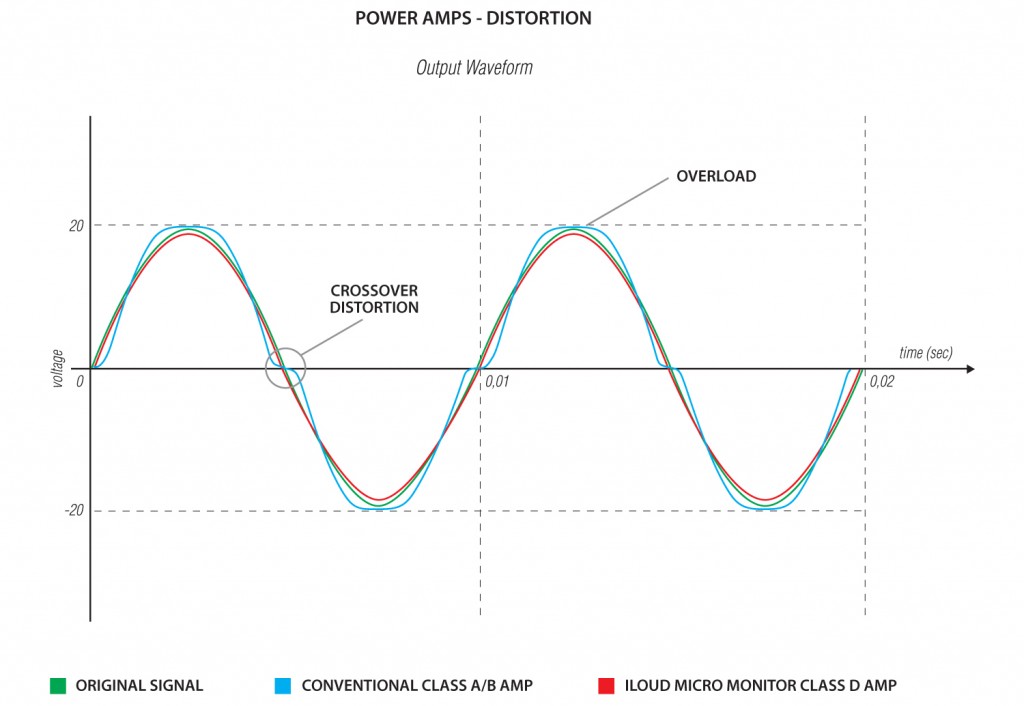 Each tweeter and woofer in the iLoud Micro Monitor system is powered by ultra-efficient class D power amplifiers that push the aforementioned total of 50W RMS with low-end response down to 55Hz (–3dB) — the best bass response in its category according to the manufacturer. Each monitor features a 3/4 inch silk dome tweeter, a 3 inch high-rigidity custom composite material woofer and a large-flaring front-firing bass reflex port. As a result, it’s able to deliver smooth and extended high frequencies, an exceptionally open, focused midrange and a solid, controlled low end, all of which I got to hear with my own ears. 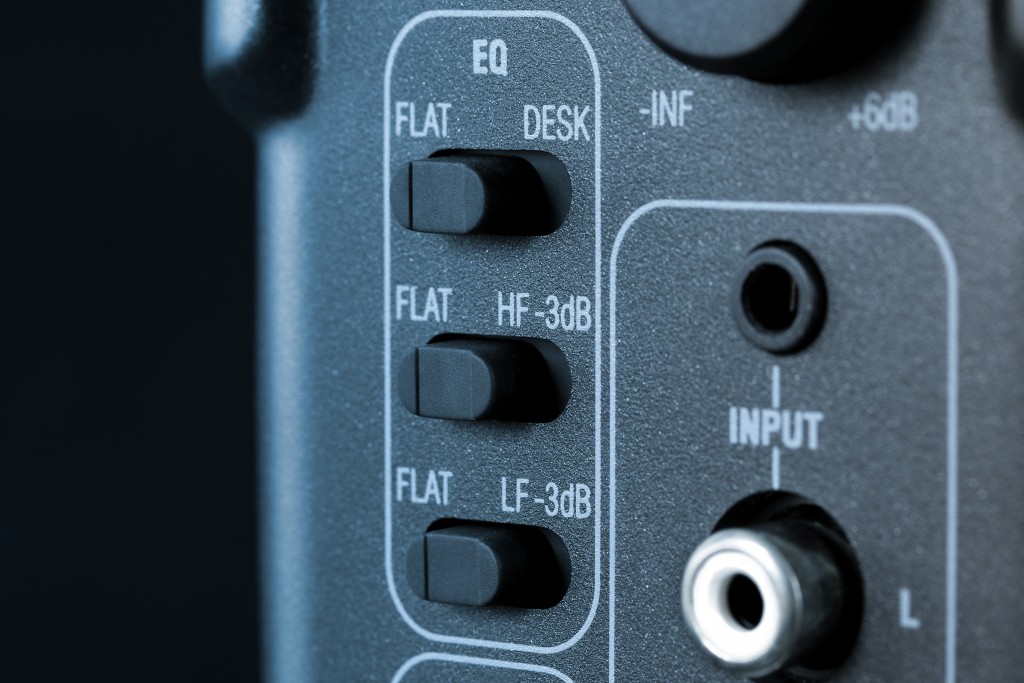 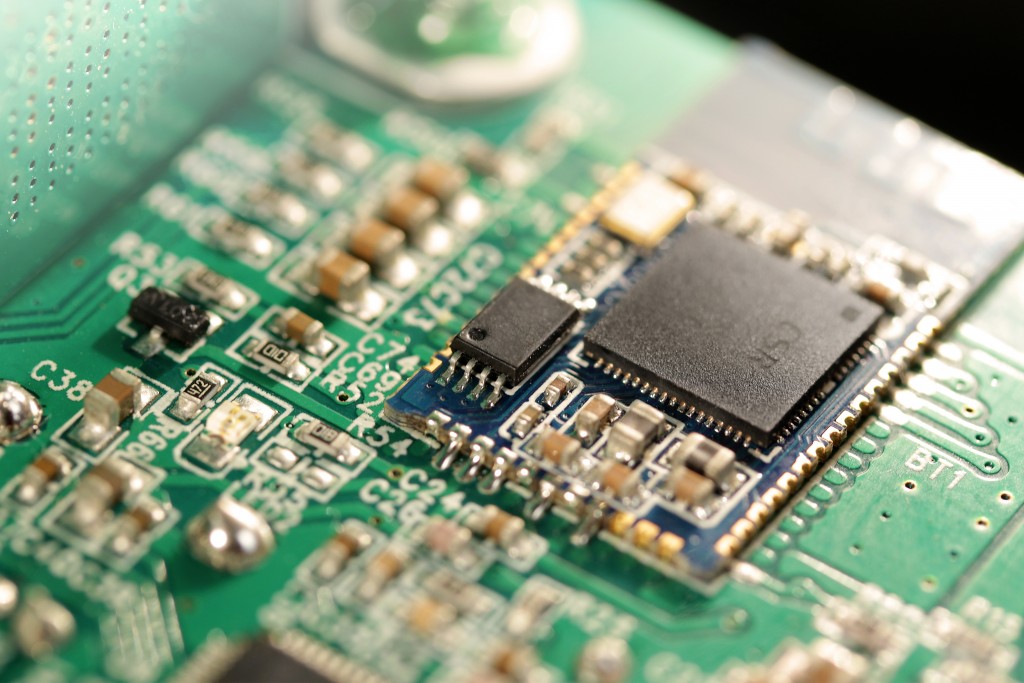 This DSP is responsible for things like taking care of the frequency and phase response of the monitors as well as controlling the dynamic range so that the drivers are always under control and operating efficiently. It also acts as a digital crossover that allows for invisibly smooth transitions between the drivers themselves. 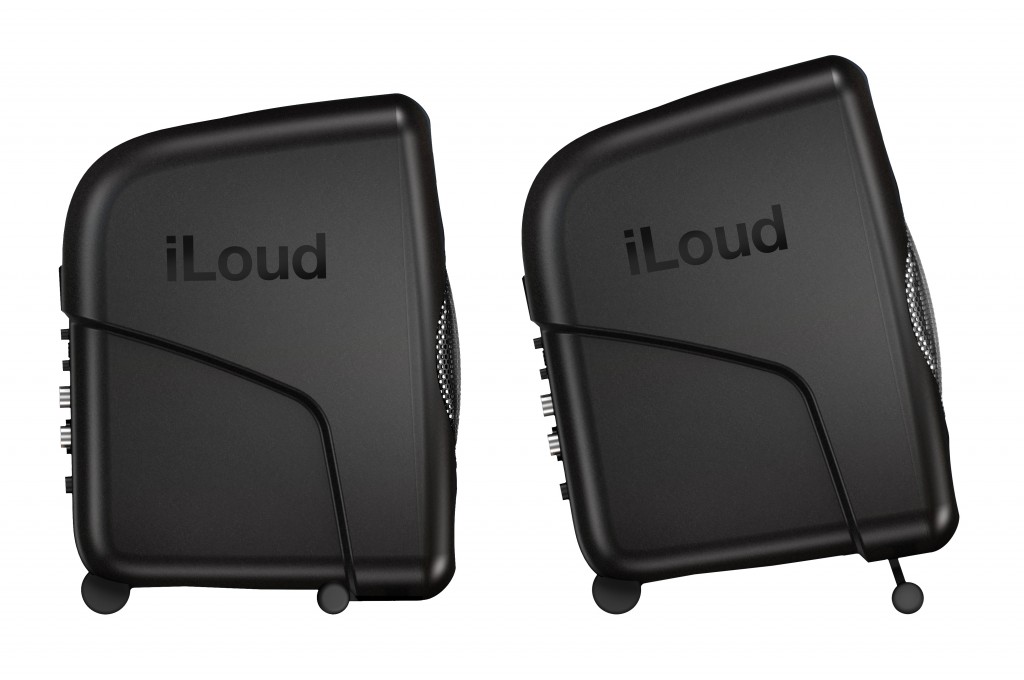 We can also position the iLoud Micro Monitor’s speakers at two angles of inclination thanks to the integrated isolation base that guarantees further mechanical de-coupling and purer sound. With these two features, we can optimize our listening experience to suit the characteristics of our room. 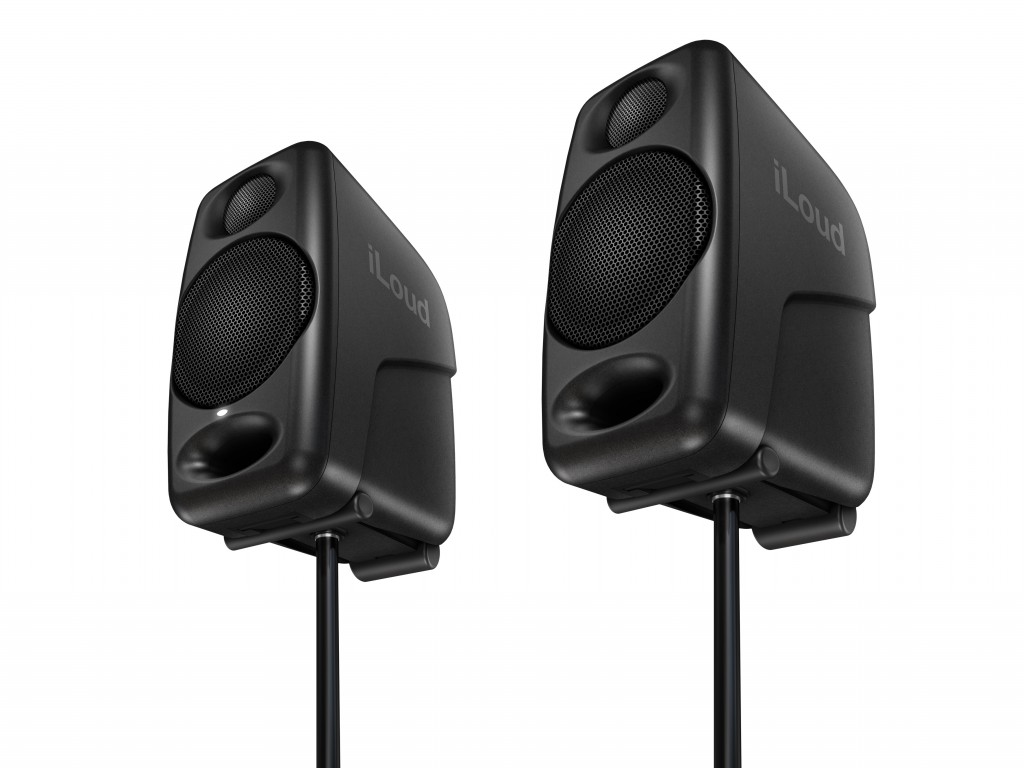 The iLoud Micro Monitor system also features an integrated mic stand thread (UNC 3/8”–16) so –if desired— we can place them on any pair of standard mic stands.

It has inputs for both RCA and 3.5mm (1/8 inch) connectors, and it can also receive audio via A2DP Bluetooth from any Bluetooth-enabled device. (See my comment below about why I chose to use the analog inputs.)

Why I chose to test with a wired connection

Beyond A2DP Bluetooth’s own audio compression, I was also concerned about potential latency, aka delay. I know there would be some delay just in the DSP (explained earlier), but I expected there to be even more delay via Bluetooth A2DP, which is the type used not only by the iLoud Micro Monitor system, but also by any other wireless Bluetooth speaker I have ever seen. So given the short time before I had to return the evaluation unit and that supposition, I decided to to do my evaluation via a wired connection. Later I received the official response from IK Multimedia’s chief technical officer in Italy:

The latency of iLoud Micro Monitor when used on the analogue inputs is of 1.05 ms, measured from the input connectors to the acoustical effective output, so including everything.

The latency when using Bluetooth is much, much more and actually is never the same because it depends on the Bluetooth host implementation as well. On the iPhone 6 with iOS 10 it measures at about 155 ms.

After receiving those numbers from IK Multimedia, I was relieved to see that the analog path I chose (where the only appreciable latency is the DSP) really has a trivial delay even if we are looking for frame-accurate video editing. Consider that a PAL-derived frame at 25 fps (frames per second) measures 0.04 of a second, or 40 milliseconds… and an NTSC-derived frame at ±29.97fps measures ±0.03 of a second, or ±33.3 milliseconds. So 1.05 millisecond of a difference in the DSP is almost trivial for frame accuracy, whether we are dealing with 23.976, 24, 25 or 29.97 fps. However, as I suspected, the Bluetooth A2DP path is quite problematic for audio monitoring for frame-accurate video editing, since 155 milliseconds works out to be about 4 PAL-derived frames, and about 5 NTSC-derived frames. So for frame-accurate editing, the analog path is indeed preferred. However, I am still glad that IK Multimedia included the Bluetooth A2DP, since we can get extra usage of an iLoud Micro Monitor just to listen to music or online radio (like my CapicúaFM show or any of the thousands of others that are available) from our smartphone or tablet when not editing.

Whether we do post-production using audio software, i.e. Adobe Audition, Avid Pro Tools, or my current favorite, Hindenburg Journalist Pro (covered here, here, and here), or video editing software with tools like Adobe Premiere Elements, Adobe Premiere Pro CC, Apple’s Final Cut Pro X, Apple’s iMovie, Avid’s Media Composer or Blackmagic Design’s DaVinci Resolve, fortunately, we don’t have to spend a fortune for good and attractive-looking powered reference studio speakers. The iLoud Micro Monitor system is available for under US$300 or an equivalent amount in your local currency and region. I can’t think of anything I would change in the iLoud Micro Monitor for its intended target. I anxiously await the production units to become available, presumably the first week of October 2016. Bravissimo IK Multimedia!