Featuring a New GP2 Processor with higher rates and resolutions for the GoPro HERO10 Black.

I’ve been reviewing the entire line of GoPro cameras for over 13 years now so you can imagine my enthusiasm when a new one rolls out, and the GoPro HERO10 Black does not disappoint. Here are my initial thoughts working with the camera for about a week in various conditions.

GoPro announces their latest and greatest; the HERO10 Black. Once again outdoing themselves packing a lot of punch in a small package! The company’s newest proprietary processor chip, the GP2 can deliver 5.3K video at 60fps, 4K at 120 and 2.7k at 240 – including the latest HyperSmooth digital stabilization technology and horizon leveling capabilities that out-perform even the most sophisticated gimbals.

GoPro’s shockingly good in-camera video stabilization gets an upgrade to HyperSmooth 4.0, ensuring that HERO10 Black smooths out even your most shake-laden experiences. The camera’s in-camera horizon leveling feature benefits from an increased tilt limit of 45° in high-performance settings, up from 27°, helping even your most chaotic video footage look professionally smooth and steady. (see my examples to follow where I literally try to break this stabilization!)

The HERO10 Black is identical in size as it’s predecessor, the HERO9 Black and even shares the same battery (though it actually weighs just slightly less). For webcasting purposes it now also offers the HyperSmooth stabilization while live-streaming. It can take all of the HERO9 Mods (firmware updates pending at the time of this review) and the updated removable lens cover is more scratch-resistant and water-shedding than the previous model. 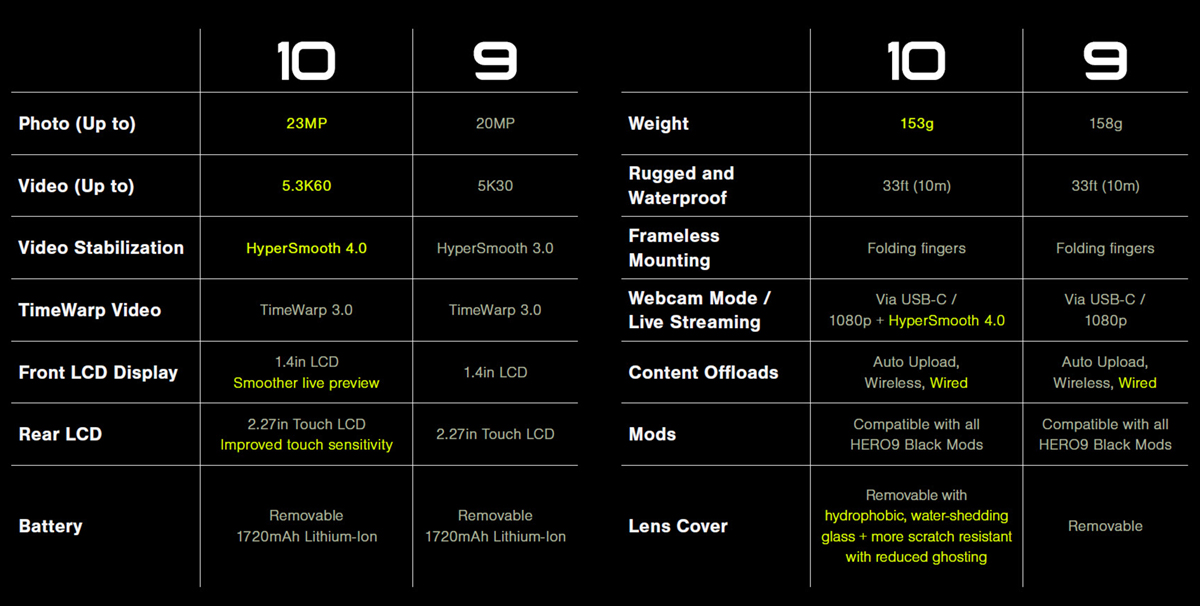 GoPro has been consistently keeping their products affordable and the HERO10 Black is no exception. When you subscribe to  GoPro.com you save $100 off the list price right away.

They also have an accessories bundle with some “kickass pricing for new AND existing subscribers.” The HERO10 Bundle includes the camera plus Shorty, Magnetic Swivel Clip, an extra battery and 32GB SD: 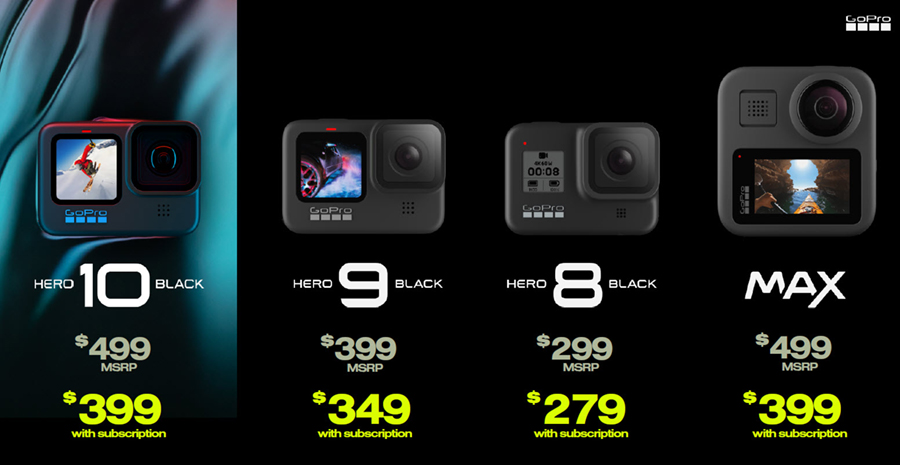 The new plastic-free packaging is great as well, as it also serves as a good storage and carrying case for the kit. 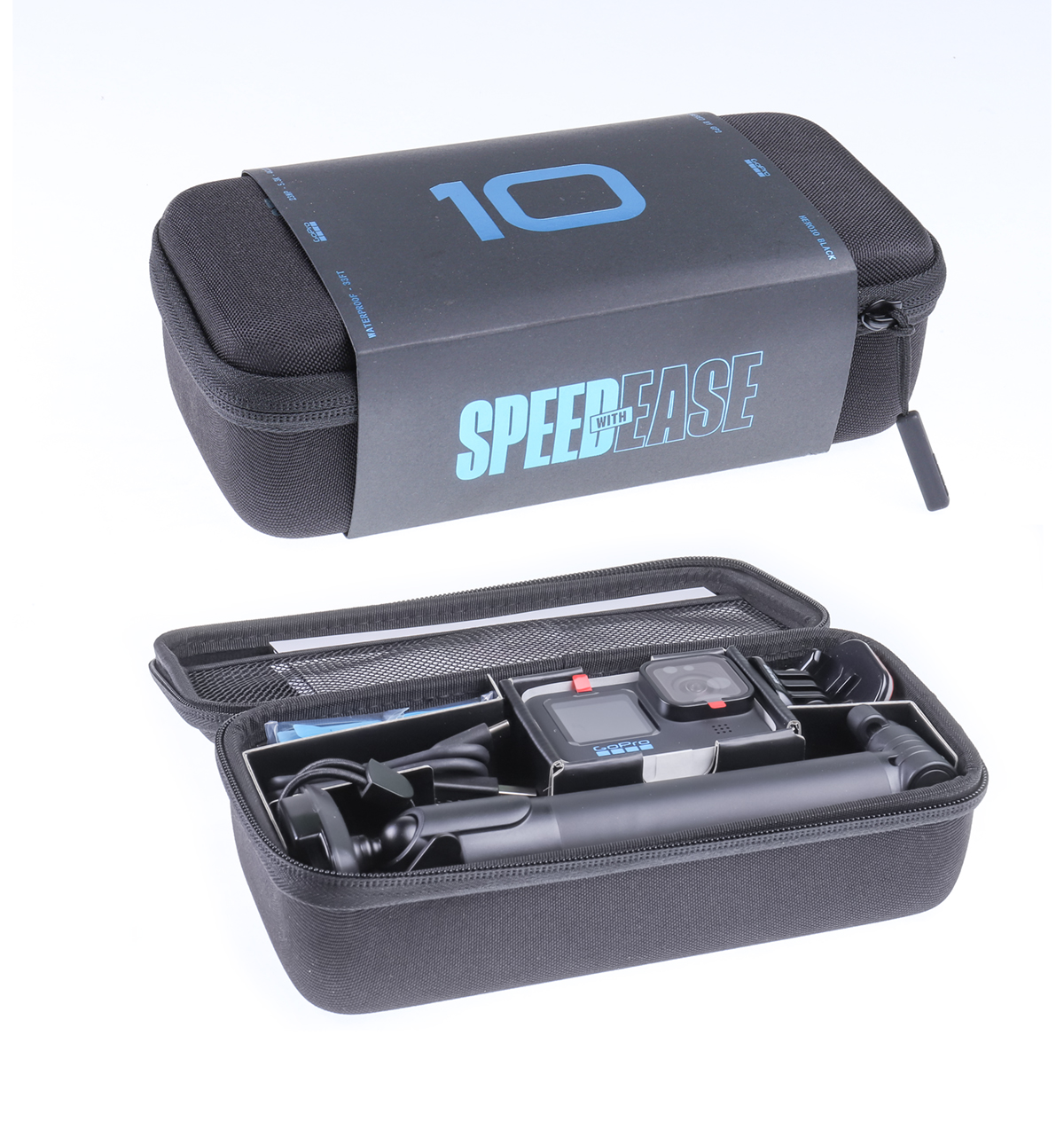 While I haven’t yet really begun to explore all the new features and shooting modes before this product launch, I did get to have a bit of fun trying to break it! (Thankfully, I didn’t) 😉

From off-road action to the water and the rocky hills on our farm to our kitchen for a virtual cooking class, I got to put it through its paces in short order. 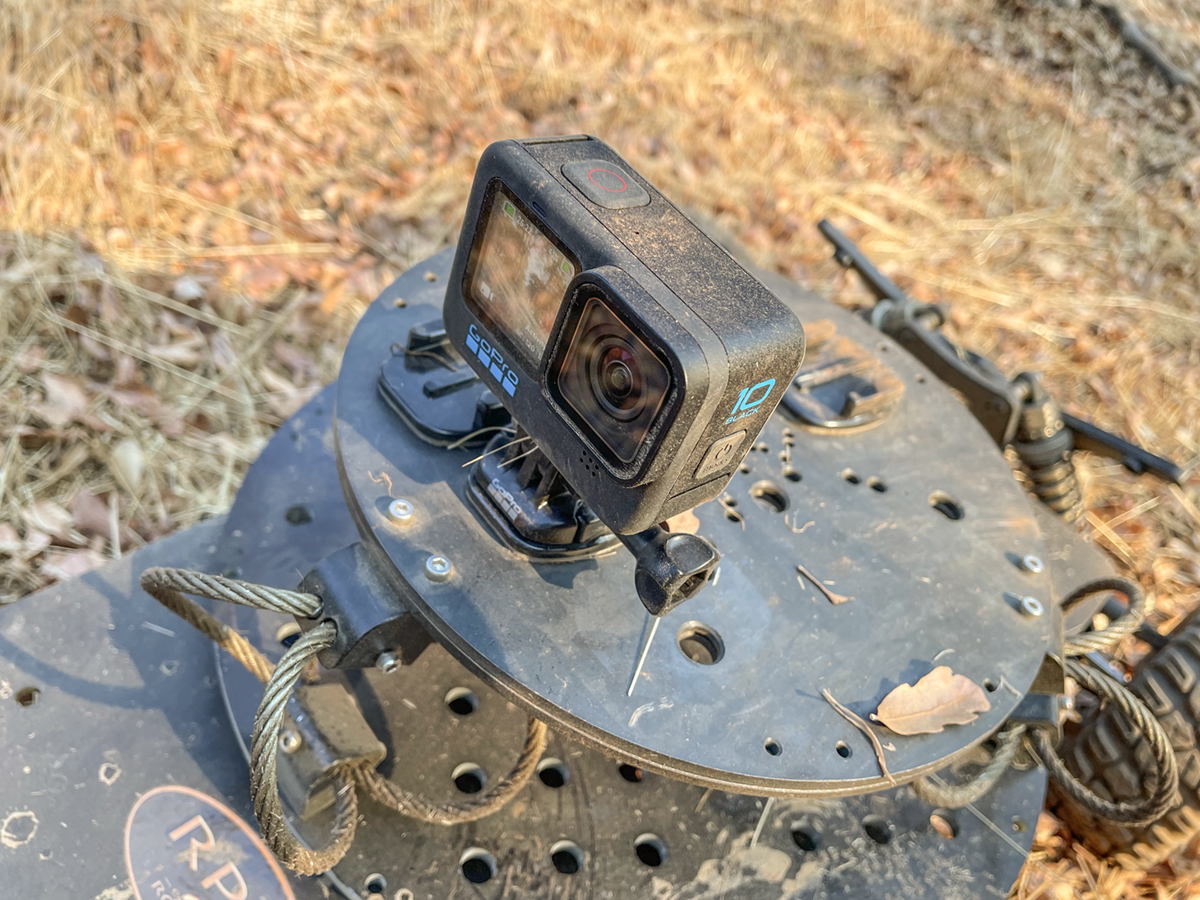 As I’ve done in my past few GoPro product reviews, I’ve tried to shake up the HyperSmooth stabilization with some good jolts on my quad CineRover on various parts of our farm in the Sierra Foothills.

I have to say that enabling the HyperSmooth stabilization and the Linear lens + HL (Horizon Leveling) I just couldn’t seem to break it or shake it loose!

The resulting footage was smooth – even when kicking up gravel and jumping over rocks on the steep 18-degree slope hillside. Sure, there’s a bit of bouncing in the optics as to be expected in the Z-axis but that really helps to give you the sense of the action the vehicle is taking on.

Check out the video of the results (4K version coming soon)

Hitting the Water with Speed! 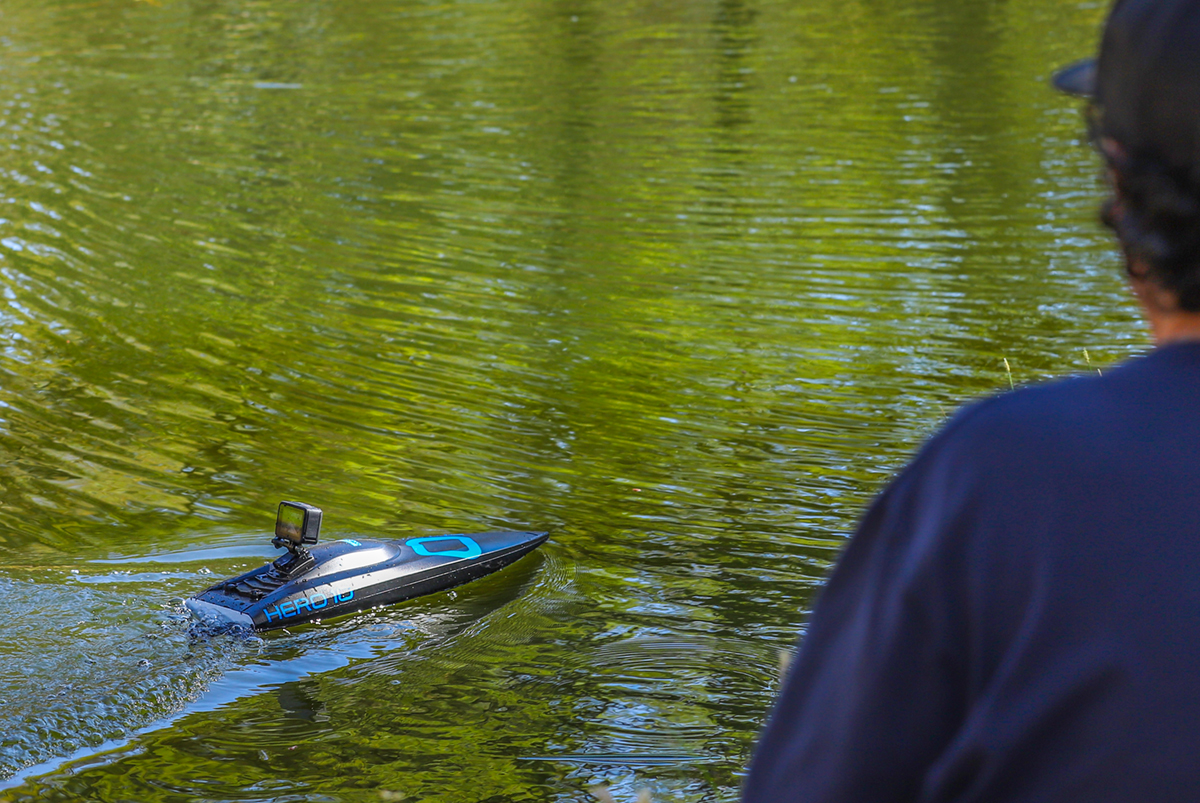 I just had to get a shot of this boat in my studio before I took it out for some abuse!

Due to the fires in the surrounding area, my original plans to take this out to a local lake got postponed so when some of the smoke cleared again, I walked over to our neighbor’s pond and aerated the algae for them!

They really enjoyed watching the action as well!

Again I was impressed by the HyperSmooth stabilization and Horizon Leveling of the resulting footage. Even with the sharp jolts of the throttle and sharp turns it held the image steady.

Note though, that I didn’t get the camera wet before hand so the water-shedding capabilities in the rear-facing view weren’t optimal.

Here’s my video from the experience – before I got it stuck in the tall grasses at the end. 😉 (4k Version coming soon) 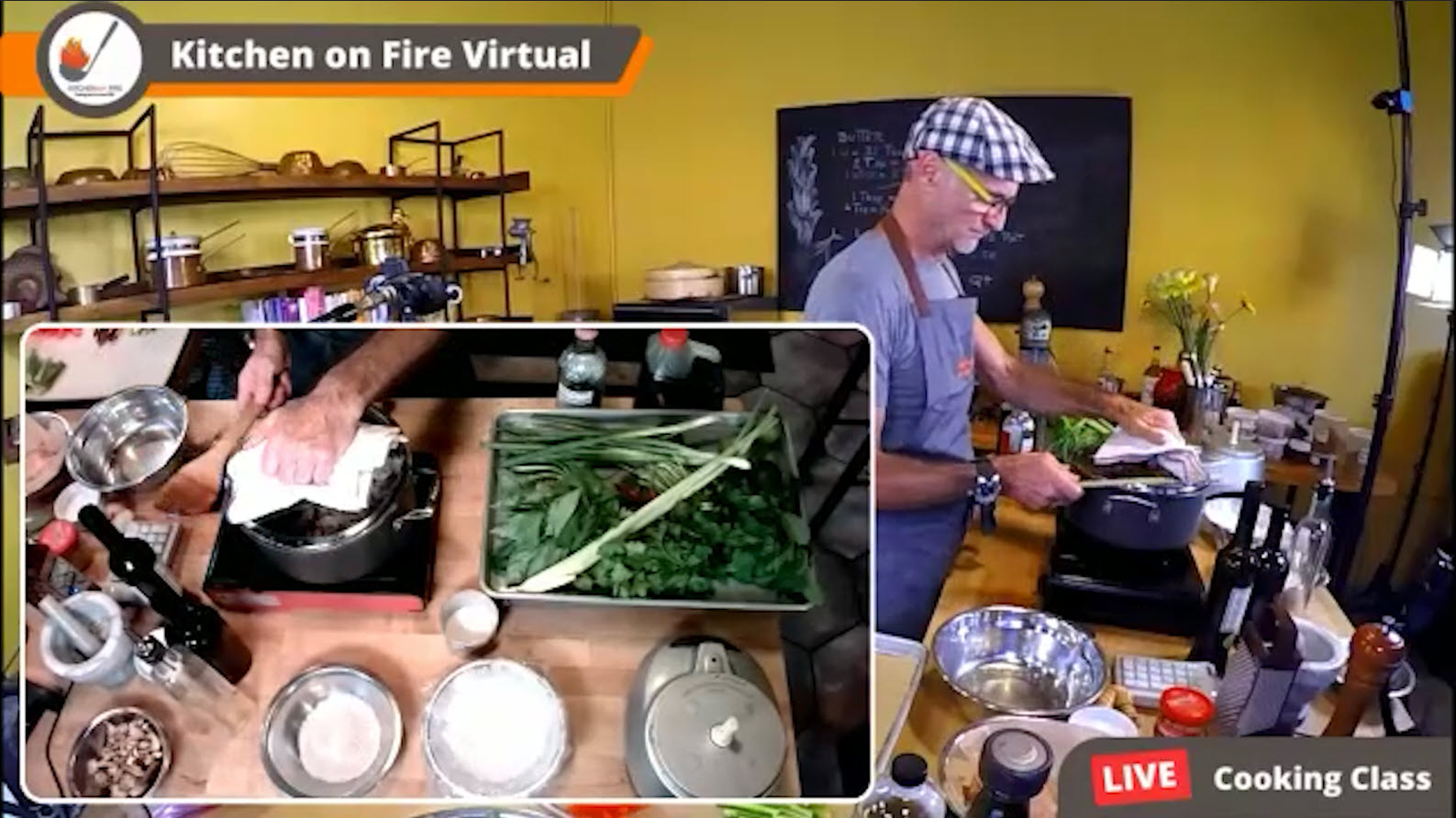 I’ve been a pretty decent home cook over the years, and with the pandemic and us growing a bit of produce and fruit here on our small farm in the Sierra foothills, I’ve been making most all of our meals and breads while we’ve avoided restaurants and take out since Feb 2020.

Since I share a lot of what I make on social media, the folks at GoPro suggested I did a virtual cooking class  and see how I might be able to find some creative ways to use the HERO10 Black in capturing my experience.

We got signed up for a one-on-one virtual session with Chef Olive of the Kitchen on Fire Cooking School in Berkeley, CA.

It just so happens that Chef Olive is also a huge GoPro fan and uses several with a video switcher in his studio kitchen for the virtual experience, so he was really delighted to work with me on this project.

I got to choose from their menu and selected Thai spring rolls and Tom Kha Gai soup. As I mentioned, we haven’t had any restaurant food in about 18 months, so my wife told me not to screw this up! (no pressure!) 😉

This method of learning from streaming one-on-one with a professional chef was the best cooking learning experience I’ve had, and learned some really good new skills as well! 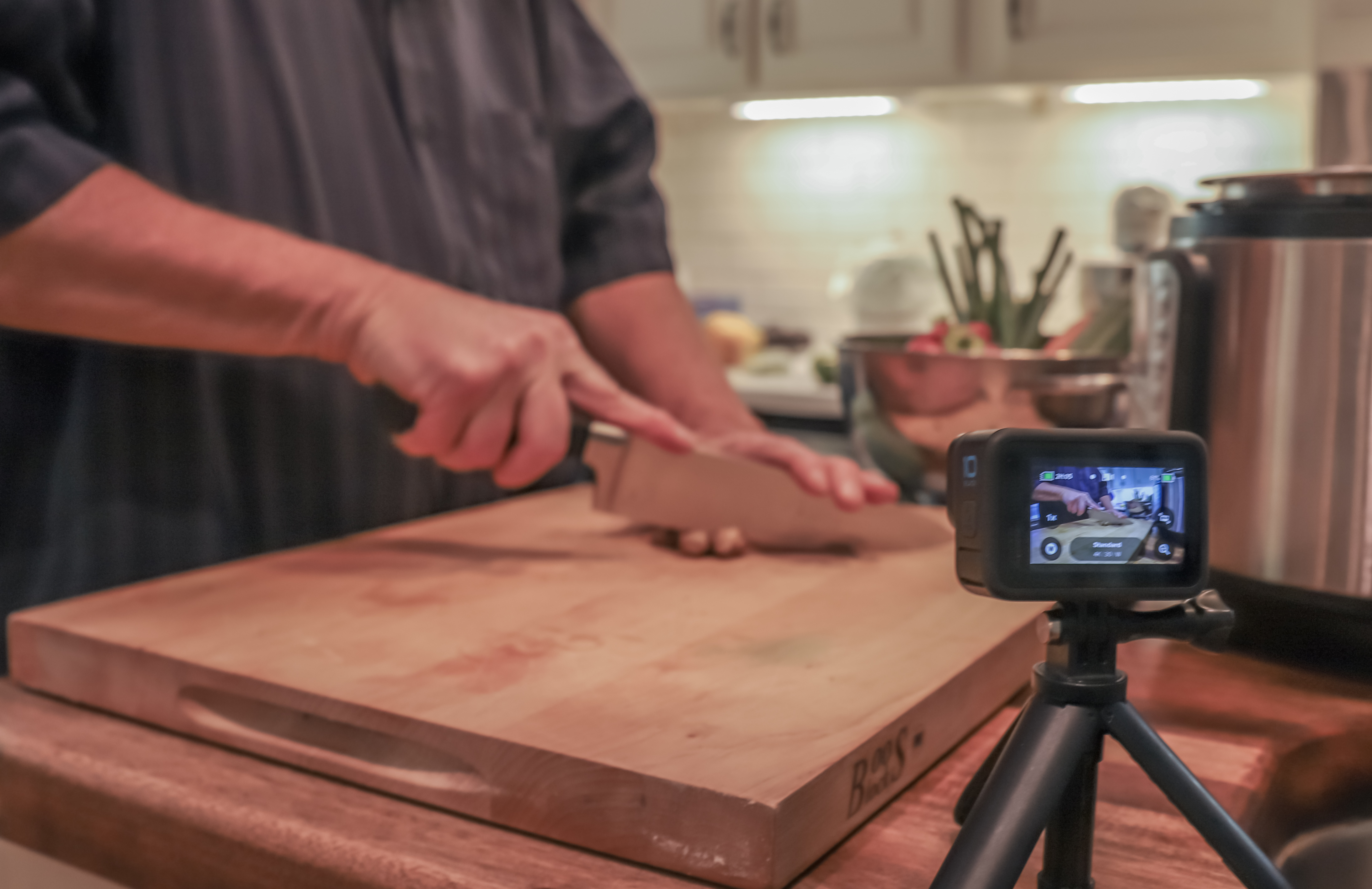 You can see how I captured some of my experience in this following video using available light in our kitchen.

One note I must mention, is that under our counters we have fluorescent lighting and some of my super slo-mo in 240fps couldn’t be reduced to more than 25% or I’d get the strobing effect from the shutter angle (which I had on Auto). In the future, I would manually change that in the Protune settings (and I’ll cover that in my follow-up review next month).

Enjoy – as I must say we sure did!

Since my first digital GoPro review back in 2008, I’ve always stuck a HERO on everything that moves, including my cars, trucks, RCs, drones and even our dog and horse!

Since we live out off a gravel road, there are many other side roads that aren’t well-maintained and require a 4×4 just to get up them. So I use this one particular road for my GoPro testing these days – usually when its really wet and muddy, but this time of year and with the drought, it’s just really washed-out and rocky with deep ruts. PERFECT!

Watch how the HyperSmooth and Horizon Lock smooth this out so it feels like you’re in a Cadillac!

This video is right out of the camera in 4k/60 with no post processes other than one edit cut:

Of course, GoPro doesn’t just stop at the camera itself with their services. I found that using the new GoPro Quik app to control my HERO10 Black and be able to pull some screen shots off to send to myself was really easy and intuitive!

I still pulled the cards to dump the media on my hard drive but will explore more in the coming weeks as to how all of it is integrated with their cloud service and how easy that is to access and navigate first-hand.

NOTE: I’ll be doing a follow-up review that has more comparisons with the HERO9 and more in-depth look at the features and software. 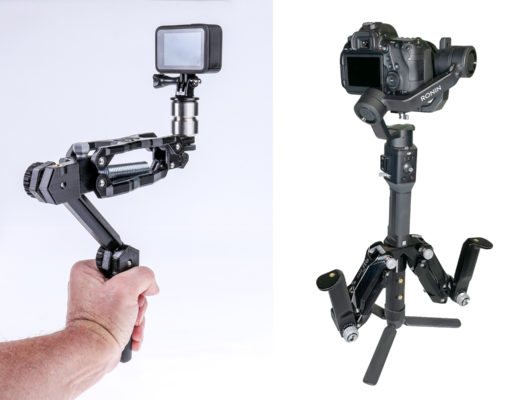 I’ve recently discovered these Scotty Makes Stuff Z-axis Stabilizers that help eliminate the 4th-axis “bounce” when walking with a...