The industry standard screenwriting app moves up a version number 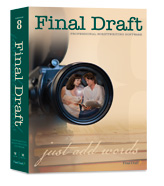 It doesn’t seem to happen very often so maybe it’s worth mentioning when it does …. the seminal screenwriting application Final Draft has moved to version 8!

I remember getting Final Draft back in the mid-90s and pounding out a couple of feature length screenplays before I ever went to film school. I had tried writing them in a word processor but reasoned that if something would take care of the formatting for me then I would write more, jack around with margins less. It worked. Two screenplays later I went to film school, took screenwriting classes and read some screenwriting books. My writing career went downhill from there. I think it was one of those cases where the less I knew about the “proper” way to write a screenplay the more I would write! That said, lots of shorts, and half-started / half-finished / half-assed screenplays later I still use Final Draft.

• Scene View – Outline your script ideas and reorder scenes in this high level overview.
• Scene Navigator – Manage and view the important details of your scene in this sortable floating palette.
• Scene Properties Inspector – Add scene titles and colors to track your story lines, characters, etc.
• Page Count Management – Now you have even more control about what fits on a page
• XML File Format support – Other software now works seamlessly with the new Final Draft .fdx file format.
• Remember Workspace – No more searching for the correct draft you were just working on

The question many would ask is Final Draft 8 worth the $79 upgrade price (until June 30 when the upgrade jump to $99) or the $249 when buying new. Many would probably say no, pointing to the availability of free or cheaper options like Celtx or Scrivener. But both of the applications attempt to do a lot more than just screenwriting. You could also look at something like Montage or Movie Magic Screenwriter. Any of those applications will help you get your screenplay written. It might just be a matter of finding out which is right for you. I’ve tried several of them and always find myself coming back to Final Draft. It’s ease of use and rock-solid performance haven’t made it the industry standard screenwriting software for nothing. We’ll see what Adobe is able to do with Story when it comes along. One thing is for sure …. there’s a lot more options for dedicated screenwriting software in 2009 than there was in 1996. That must mean there’s a lot more people writing today as well!