One tough and useful field unit! 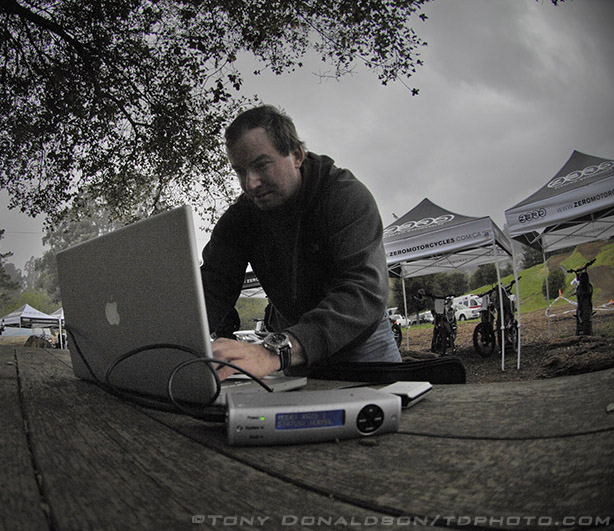 I’ve had a chance to try one of Wiebetech’s new ToughTech Duo , and I was impressed. It lives up to it’s “Tough” moniker and provides the support and security I like in the field. It really has everything you could want in an external storage unit for location work. It’s a tiny RAID case, using two laptop drives internally, so it fits in almost any bag or case next to your laptop.

The case is aluminum and handles heat dissipation without fans. It has two firewire 800 ports, one esata/USB, and a power port. The coolest thing about this is that you can use it with or without AC power, in the field you can use bus power, AND power a card reader or other device through the other FW800 port. This option is HUGE for field use. I often used it with one FW800 cord connected to the MacBook Pro, and one cord powering a Sandisk Extreme CF card reader, all running from the MacBook Pro’s battery. It didn’t even blink. I only wish my larger RAID unit allowed powering through the FW800 bus. The ToughTech Duo performs as well as you’d expect, rock solid in the field in my couple of weeks of testing. Back at the office, I can plug it in to the wall. I LOVE this feature.

The back has all the options for connectivity. It has a SATA/USB port and two Firewire 800 ports, and a DC-in port (with a power cord included). There’s an on-off switch as well, and just above the back there’s a Kensington lock port. The unit doesn’t even need the power cord, it can be bus-powered. This option is HUGE for field use. I often used it with one FW800 cord connected to the MacBook Pro, and one cord powering a Sandisk Extreme CF card reader, all running from the computer’s battery. It didn’t even blink. I only wish my larger RAID unit allowed powering through the FW800 bus. The ToughTech Duo performs as well as you’d expect, rock solid in the field in my couple of weeks of testing.

The front display has 3 lights, one for power, one for system, one for RAID, showing red when starting up, then green for power only in normal use. There’s an LCD that shows any status, including RAID level. The 4-button controller on the right allows you to toggle through simple menus that confirm that each drive is ok, the actual operating temperature, RAID options and more. 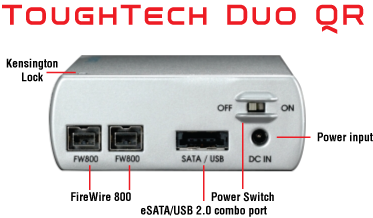 Changing out drives is a cinch if one goes bad or just installing in the first place, with no tools needed for the trays. Once installed, the trays and doors lock solidly.

So far I’ve been using this for a couple of weeks, and I really like it. It set up in seconds, performs flawlessly in the field and on my desk, and it gives me the piece of mind I want with my images. I’ve even used it for editing some HD video using a variety of codecs. Uncompressed stuff chokes it as you might expect, at least in RAID 1, but it plays h.264 and XDCAM stuff without much trouble in Final Cut Pro. The USB is 2.0, not 3.0. I was using Firewire 800, and it works beautifully that way. In the picture above, I’m working on transferring images to it when it’s just started raining, and I’m not talking about a little – the skies had opened up. I was under a tree to get a couple of more images transferred, and I was much more concerned about my MBP than the ToughTech.

Empty (no drives), this case will set you back around $400. You can put up to 2x750GB drives (the highest capacity laptop-sized HDD available as of this writing) and it will run just north of $700. As with any RAID (except perhaps a DROBO system), you should use two drives of the same capacity, though they don’t have to be the same manufacturer. Some people suggest using different manufacturers for RAID setups, so the potential fail rate of drives will potentially be much different. If one fails, swap it out and let the RAID rebuild. In the case of the ToughTech Duo, you can even use it while it’s rebuilding a RAID with a fresh drive.