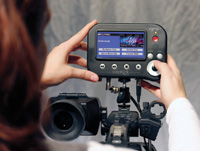 What is the size of your display? Will it work in bright sunlight?
FFV selected a high quality 4.3 TFT Display (480 X 272 Pixel Resolution) that works well in direct sunlight.

Can I preview my recorded clips?
The sideKick HD display is both a confidence monitor and allows users to playback their clips. It has simple VTR control buttons and it even includes the ability to scrub and jog the video.

Does sideKick HD have a touchscreen?
FFV strategically decided against using a touch screen display. They felt users of sideKick would not want to have their finger prints on the display and interfere with the use of the screen as a confidence monitor.

Why did Fast Forward Video go with Solid State Disk Drives (SSD) instead of spinning drives?
FFV chose SSDs because they have no moving parts and aren’t affected by shock and vibration. In addition, SSD performs well in extreme environmental conditions. Spinning drives have the ability to drop frames when affected by shock or vibration. No one wants to experience drop frames in their video file.

How complicated is the menu selection?
FFV’s mantra with sideKick has been to “keep it simple” so the user gets what they need and not a lot of what they don’t need. They built the sideKick for field use by professionals where time is a real commodity.

What is sideKick HD made out of and how much does it weigh?
The sideKick’s enclosure is made out of glass-filled polycarbonate for durability and light weight. The unit weighs less than a pound and that weight includes the SSD. FFV made it light so you can easily attach sideKick to your camera and not dramatically change the balance point.