Those are questions attendees of a program developed for Sony’s Digital Motion Picture Center at Sony Studios will be able to ask and answer for themselves on October 20th. The event will be a chance to see Sony’s top-of-the-line 4K reference displays while also hearing from a couple experts who have knowledge and experience about the technology. Cinematographer and Digital Cinema Society President James Mathers and Sony’s Keith Vidger will explore these topics and more during an in-depth presentation at Mac House Productions in Fremont, CA.

We caught up with James to ask him a few questions about the event as well as what he’s looking forward to discussing at it. We asked him about what he’s planning to discuss with Keith, what it was like to use the FS7, what sort of professional is going to get the most out of the event and plenty more.

ProVideo Coalition: Always great to catch up with you, James. Any exciting projects that you’ve just wrapped up or have been working on which you can tell us about? 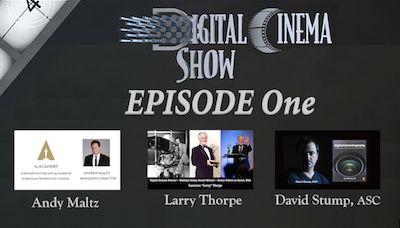 However, what has been consuming more of my energy lately is a labor of love, which is hosting a new magazine format web series from the Digital Cinema Society. It’s called “The Digital Cinema Show”, and is designed to help keep viewers current on cinema technology while also covering the art and business aspects of the Entertainment Industry. The premiere episode features interviews with Andy Maltz, Managing Director of the Science and Technology Council of the Academy of Motion Picture Arts and Sciences on ACES, another with Canon’s Larry Thorpe reminiscing about the early days of digital cinema and what he sees for the future, and with renowned visual effects expert and cinematographer, David Stump, ASC discussing his new book, entitled “Digital Cinematography.” Episode One is now accessible from the Digital Cinema Show link on the DCS homepage or by visiting:

You’ve obviously seen a number of paradigm shifts throughout the industry. How have you seen changes to the tools and technology that professionals are using impact the approach they can and do take?

There has been tremendous progress in the development of the tools filmmakers can use to tell their stories. Quality image acquisition systems are now very accessible allowing many more people the ability to make a movie. This ease of access can be a great resource to learn cinematic technique by doing. However, without going through the vetting process of script development, sometimes movies can be too easy to make. Filmmakers don’t always take the time to honor the craft of good storytelling. Sadly, this results in a glut of low budget productions where it is hard for the creme to rise to the top and get recognition, or be seen by a large audience. Just because anybody can make a movie these days, doesn’t necessarily mean that everybody should.

The general acceptance of 4K is a great example of how fast things change, because just a few years ago it was considered extremely niche, but that is no longer the case. Why do you think so many professionals have embraced 4K technology?

I’m not sure 4K display has really arrived yet, at least not for home display; but acquiring in higher resolution is to me a no-brainer. With the march of technological progress, the barriers to working in 4K have come down, and there are many advantages. Downsampling always improves quality, the ability to zoom in a bit to reframe or stabilize is amazing, and the advantage of future proofing your master make any of the small challenges of handling the extra data well worth the effort.

The FS7 has some fantastic 4K capabilities, but that’s just one aspect of the camera which has people talking. What is it about the FS7 that has gotten so many professionals interested?

I had a chance to use the FS7 recently for some celebrity interviews, including with Jerry Seinfeld. Besides the very low price point for a fully featured 4K camera, I would say what makes it so appealing is the easy of use. Being so small and light weight, ergonomically, the camera is a joy to work with, but more importantly it is quite sensitive to light and has very good dynamic range. It also quite versatile, shooting a wide variety of formats, with speeds up to 240fps.

4K and the FS7 are just a couple of the topics that you’re set to explore during your Northern Camera Event, titled “Sony 4K end-to-end — From Cameras to Displays“. What has you most excited about the event?

Sony offers a great service to the community with their Digital Motion Picture Center, which takes up a whole sound stage at Sony Studios in Culver City. They’ve opened their doors to DCS and other groups with specially developed training courses where professionals can learn about Sony gear while putting its through the paces. Attendees shoot, post, then project to a large cinema screen; all in full 4K. It demonstrates not just the value, but also just how easy it can be to work in 4K. It’s a great program, but not everyone is able to make to the L.A. area to take advantage of it. This is why we’ve been organizing DCS events at some of our regional chapters around the U.S. We’ve already held such events in New Orleans and Chicago and have another coming up in Northern California on October 20th.

What sort of details will you be exploring with Sony’s Keith Vidger during your presentation?

The sessions at the DMPC last a full day, so with only three hours, it will be somewhat compressed. However Keith Vidger is a great presenter and fits a lot into a short amount of time. The main focus will be on cameras, but how can you evaluate a camera without a proper display, so we will also have on hand Sony 4K reference displays. We’ll set up shots, lit with Cineo Remote Phosphor lights, then process and view the images, all in 4K.

What type of professional is going to get the most out of attending this event?

Since, like myself, most DCS members are Cinematographers, our activities are most geared to that area of specialization. However, all Filmmakers need to keep current on technology, and any of them would benefit by attending this event.

All are welcome, but seating is limited so RSVPs are required. RSVP with your contact details today.