4K is as hot of a topic as it’s ever been, but the challenges that are inherent with this technology are just as pervasive as ever, especially when it comes to finishing. To address some of these issues, the Digital Cinema Society will gather at in Hollywood on Saturday, November 21st, to explore the challenges and solutions of finishing in 4K. 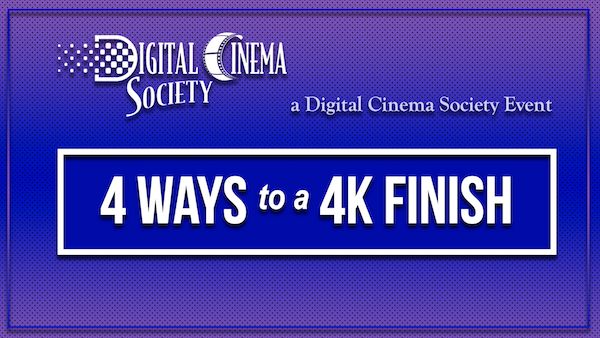 Full details around the event are available via the release below, but I was able to grab DCS founder James Mathers to ask him a few quick questions about what the transition to 4K has and will mean for the industry as a whole and find out a few things that attendees of the event will be able to experience.

James Mathers: The transition from HD to 4K to similar to the one we experienced in the move from SD to HD, with one big exception.  That difference is that we now have the benefit of experience, and can more easily avoid the pitfalls of this kind of change.  If we don’t learn from our past mistakes we are doomed to repeat them, and in this case, the big mistake was when Producers would bury their heads in the sand and wait for the storm of change to blow over; it never does.

I remember shooting projects “at the turn of the century”, which sounds dramatic and long ago, but it was only a little over a decade ago.  Some Producers were penny wise and pound foolish, insisting we shoot Standard Definition to save a little bit on the front end, thus shooting themselves in the foot in terms of archival value.

On one project, I literally circled the globe traveling to 16 different countries for a documentary on the world’s great religions. The B-roll alone would have been worth the price of admission, from the exotic Buddhist Temples in South East Asia to Whirling Dervishes in Turkey.  However, the first airing on National Geographic happened to unfortunately coincide with the US invasion that started the Iraq War; needless to say, the rating were not stellar.  So, the program was lost in the shuffle, and by the time the rights reverted back to the Producers, some years later, the industry had transitioned to HD, greatly diminishing the program’s value.

For an incremental increase in upfront production costs, these Producers could have shot in HD, or better yet, on film, and I’m sure they would be enjoying a healthy return on their invest today, as well as into the future. I make the same case today, urging Producers to shoot on 4K; the smart ones listen.

Is the inherent value of 4K more about the creative opportunities it opens up or about pushing the boundaries of the technology we’re using?

Although I feel the main advantage of 4K at this point is archival value, there are a couple of creative opportunities worth mentioning.  One is the ability to reframe as necessary in post, and the other is stabilization. If you shoot in 4K or above and frame a little looser than your final intended frame, you can take advantage of that extra image area to achieve a bit of fudge factor for stabilization. David Fincher, who has recently been acquiring in 6K for a 4K finish on such movies as “Gone Girl” is a big fan of this technique.

I’ve often heard professionals argue that 4K makes sense in the acquisition phase, but editing and delivering in 4K is a waste given current post infrastructures and the displays consumers are watching content on. Do you agree with that position?

While it is true that on current average home display, or even on a theatrical screen, it is pretty hard to discern between 4K and HD, the trend is toward larger home displays, and higher quality in both the home and theater, which will tend to make the difference more apparent going forward.  Owing to Moore’s Law and constant technological advances in post production technology, finishing in 4K is only incrementally more challenging than HD.  I believe the question is not why bother with 4K finishing, but why not master in 4K?

Do you think there’s a process or workflow standard that the industry as a whole will be able to adopt around 4K, or will everything need to be defined and customized on an individual or project basis?

Workflows, as is often quoted, are like snow flakes…each one is unique and they disappear as soon as they hit the ground.  Re-inventing the wheel like this for each project is counter productive, but there are efforts currently afoot to help ease this situation.

The new Academy Color Encoding System, (ACES) is a great example.  There are a lot of very smart people organized by the Science and Technology Council of the Academy of Motion Picture Arts and Sciences working very hard to implement an industry-wide system that will allow everyone to get on the same page technologically while still preserving creative choice.

You can find out more about ACES and many other efforts to ease the transition to 4K Post at our upcoming event, 4 Ways to a 4K Finish, November 21st at Raleigh Studios in Hollywood.

Delivery of a 4K Master is increasingly what is being demanded, but the good news is that it is getting easier to achieve, and there are now many routes to get there.

On Saturday, November 21st, the Digital Cinema Society in cooperation with such groups as the LAPPG, Digital Production BuZZ, ProductionHUB, Aotg.com, and Pro Video Coalition will gather at Raleigh Studios to explore the challenges and solutions of finishing in 4K.

Industry experts will help attendees determine their best tools and techniques via short presentations and themed panel discussions. Some of the approaches we will examine include :

Confirmations are still pending, but organizations invited to participate include, (in alphabetical order):

Where: The Chaplain Theater at Raleigh Studios, Hollywood, CA

This event is open to all, and is free of charge, but confirmed RSVPs are mandatory to get on the studio lot.  To save your place, RSVP with “4K Finish” in the subject line, and include your contact details to: