The EX1/EX3 built-in Hot Mirrors suck. Or do they? One way to find out… 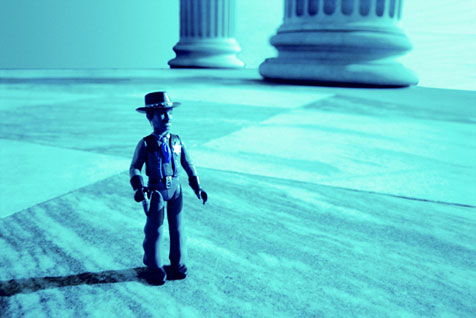 The Sony EX1 and EX3 are great cameras for the price, but they do have some fairly obvious issues with IR/far red when used with neutral density filters in front of the lens. This test taught me far more, though, than just what filters to use to eliminate a color problem on these cameras: I learned never to make assumptions about how a piece of equipment works until I’ve tested all possible options.

I’m not going to recap my testing procedures or the physics behind how the different filters work. You can find those details in my F35 and RED IR articles. I’ve gotten a lot of requests for an EX1/EX3 IR article, and as I’ve previously explained the basics this article is going to focus solely on results.

Here’s what the test setup looked like, without any on-lens filtration: 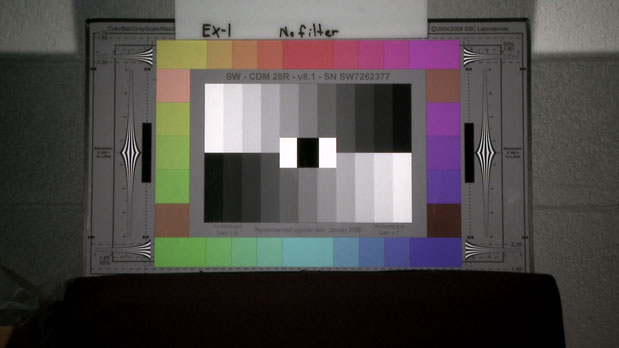 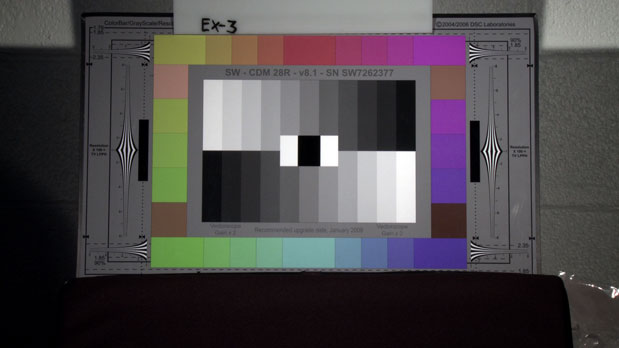 Here’s the same setup with Schneider Optics ND 1.2 filters in front of the lens: 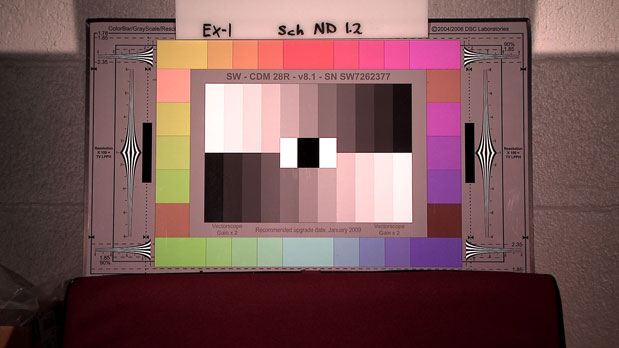 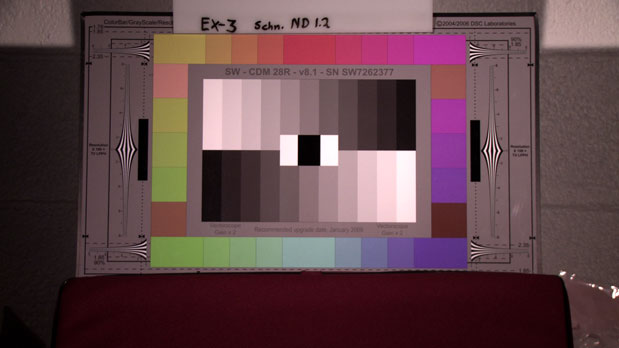 As I’ve explained before, all heavy ND filters show some color shifts because it’s impossible to make a dye that is perfectly neutral. Some ND filters go warm and others cool. In this case the Schneider filters add a reddish hue, which I’ve attempted to correct out in Photoshop. A simple white balance is enough to get rid of this hue in camera, but I chose to do it in post in order to observe the various filters’ color shifts.

In spite of white, black and gray balancing in Photoshop, the black DSC chart bag has turned a bright maroon color with four stops of ND in front of the lens–brighter than I’ve seen on any other camera I’ve tested.

The first time I looked at a black cotton shirt under tungsten light on an EX1 it turned bright maroon even without ND. Between that experience, and seeing how much red I saw with some ND in front of the lens, I figured that the built-in Hot Mirror on these cameras was either very bad or nonexistent. I was wrong, but I wouldn’t figure that out until later. Read on…

The first filter I tried was the Schneider Tru-Cut 680. This filter has consistently worked on every camera I’ve tried it on: 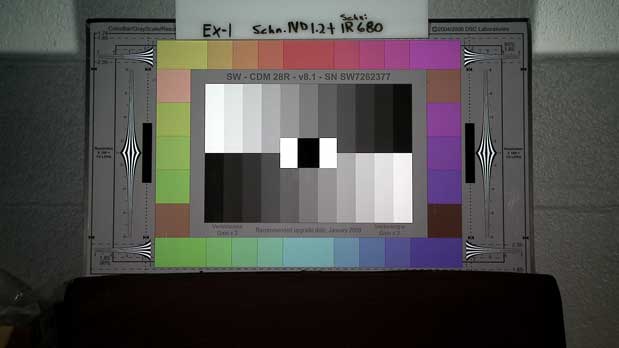 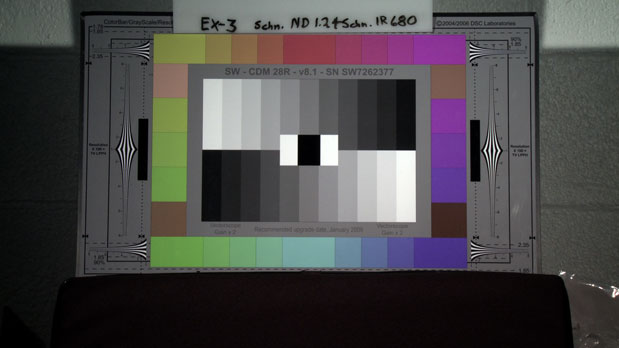 It works perfectly, but unfortunately the dichroic coating on this filter is fairly heavy and causes vignetting at short focal lengths. Here’s the same filter on the EX1 at the short end of the zoom: 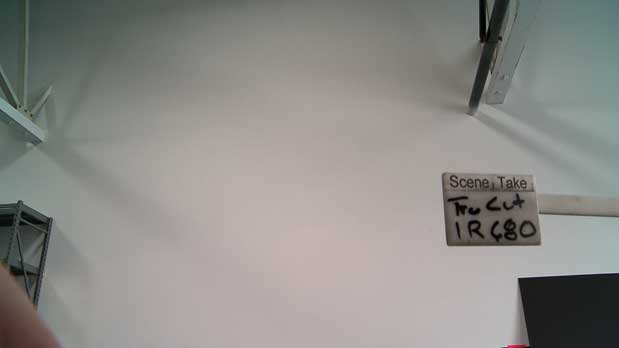 The cyan vignette is the result of looking through the dichroic coating at too sharp an angle. The Tru-Cut 680 is an excellent all-around IR/far red cut filter except for this one failing.

The Schneider ND 1.2/Tru-Cut 720 combo removes about half the red contamination on both cameras: 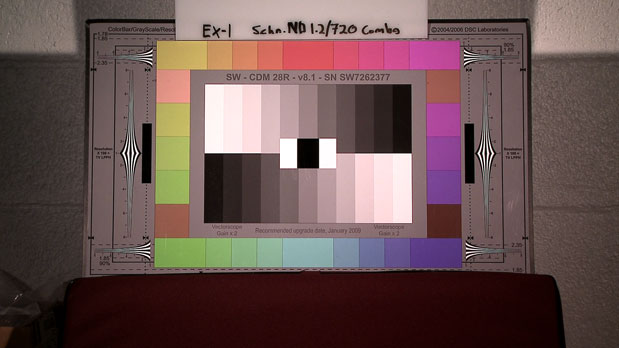 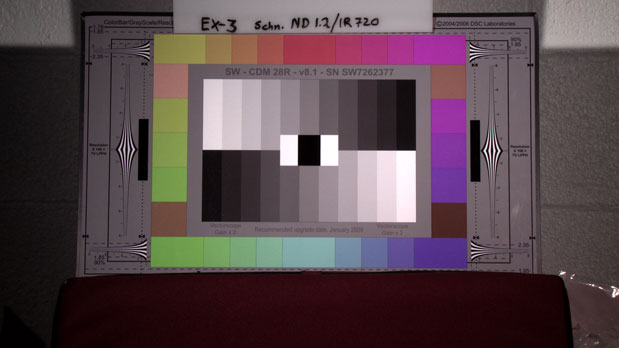 And the Schneider Tru-Cut 750 had no effect at all: 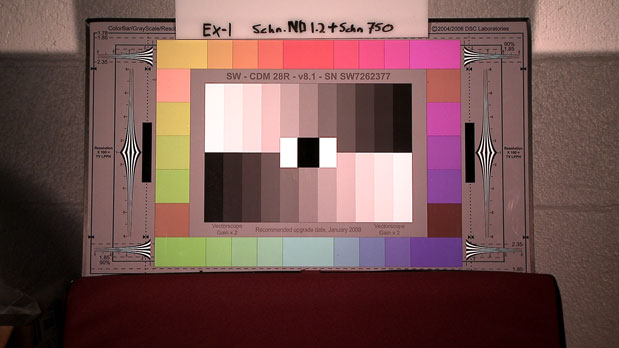 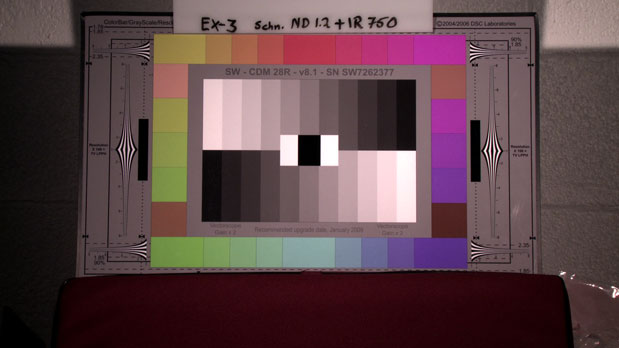 I was still stuck on my initial hunch that the EX1 and EX3 had either very poor or very absent built-in Hot Mirrors, but something about this test was feeling familiar. Still, I stuck to my assumptions as I tested the rest of the filter families on the next pages…

In previous tests I’ve discovered that Formatt seems to have one flavor of IR cut in their filters. For this test we only tried the Formatt stand-alone Hot Mirror: 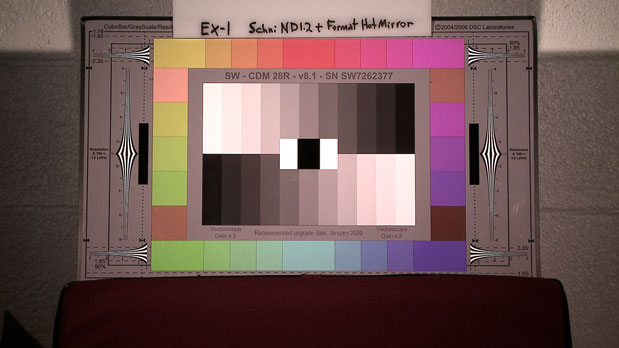 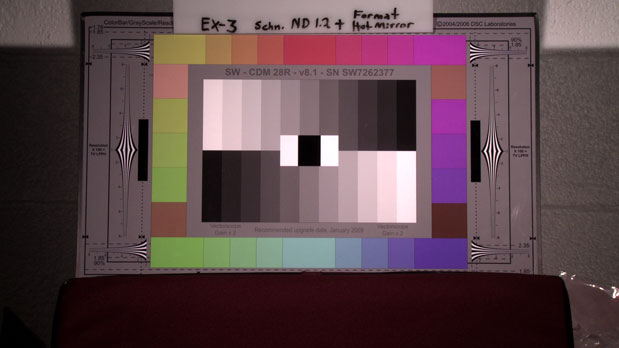 The Formatt Hot Mirror seems to cut about as much as the Schneider ND 1.2/Tru-Cut 720 combo filter: there’s some improvement, but not nearly enough to make a huge difference.

At this point the clues were starting to add up, but I was still too focused on my “bad Hot Mirror” theory to see them. The Tiffen Hot Mirror IR tests on the next page led me farther astray.

The only Tiffen filter we tried was the Tiffen Hot Mirror IR ND 1.2: 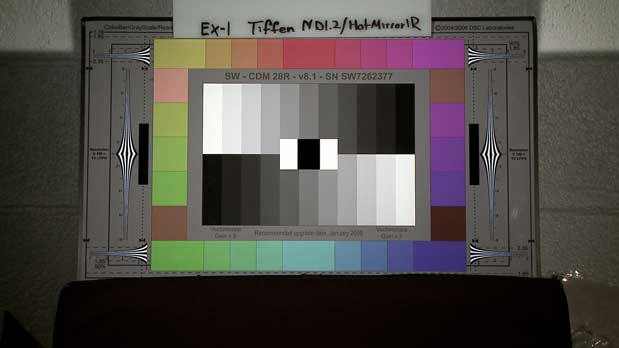 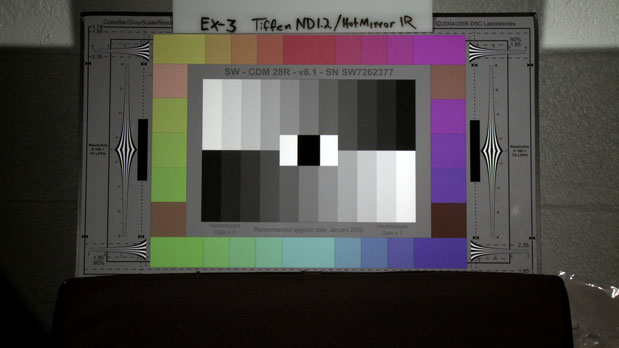 It worked perfectly. This should have been a clue, but I didn’t see its relevance until I was driving away. And then I felt like an idiot.

I was so stuck on the idea that this camera’s built-in Hot Mirror was poor or missing that I missed all the clues:

The Schneider Tru-Cut 680 worked fine except for vignetting.

The Schneider Tru-Cut 720 and Formatt Hot Mirrors removed some of the IR/far red contamination, but not all.

The Schneider Tru-Cut 750 did nothing.

I was halfway home before it hit me: the problem wasn’t that the cameras had poor built-in Hot Mirrors, and the problem probably wasn’t infrared at all. I’d seen exactly the same pattern on the Sony F35. The issue on that camera hadn’t been solved by a Hot Mirror at all, but by a dye filter that only blocked far red. That dye component is built into the Tiffen Hot Mirror IR ND filters, but as I hadn’t tested the Tiffen IR ND filters that DON’T contain a Hot Mirror component I had no idea whether the issue was IR (solved by a Hot Mirror) or far red (solved by a simpler, and cheaper, dye filter).

Could it be that this little $10k camera had the same issue as its $250k big brother? At the next opportunity, while prepping for a spec spot, I performed a quick check with the Tiffen IR ND (non-Hot Mirror) filters. The final results are on the next page…

Here’s the setup I tossed together to test the Tiffen IR ND filters. I apologize for the text overlay on the EX1 image: I was recording HD-SDI out of the camera and was in too much of a hurry to turn all of that off. (I was prepping for a Porsche spec spot, to be written up in the very near future.)

These first shots are through a Schneider ND .9 filter: 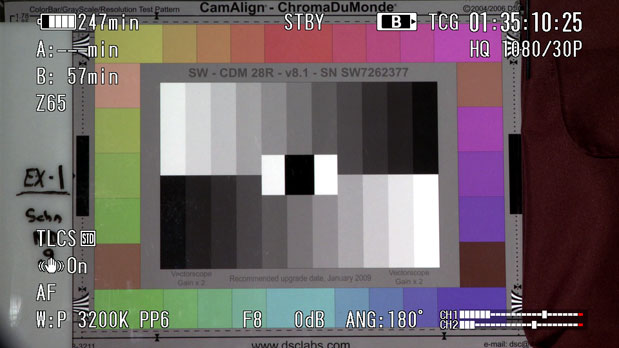 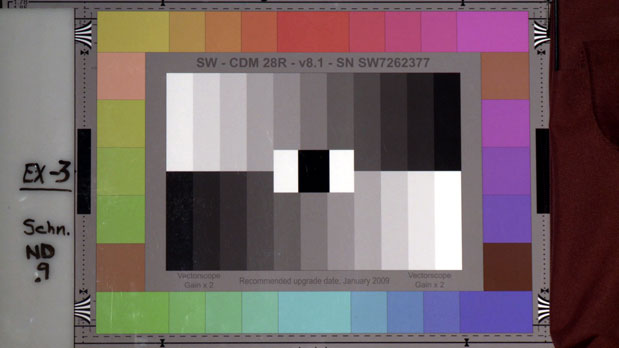 You can see heavy red contamination in the DSC chart bag on the right side of frame. Now let’s try the Tiffen IR ND (non-Hot Mirror) filter: 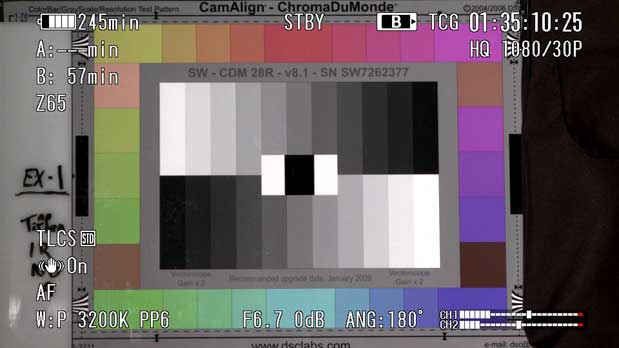 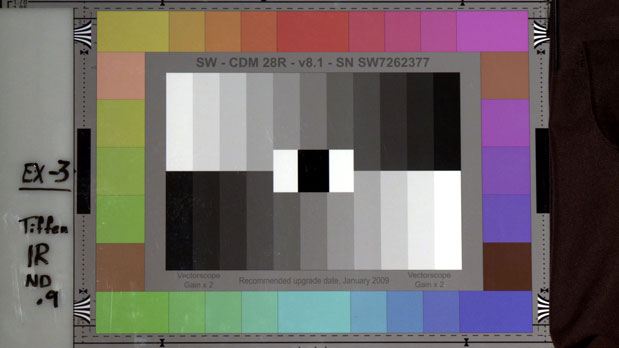 And there’s the proof. This camera has the same problem the Sony F35 does: the chip has a Hot Mirror filter on it that starts cutting at 700nm and rolls off somewhere between 720nm and 750nm, which is why the Schneider Tru-Cut 680 works and the Tru-Cut 720 and 750 don’t. The Tru-Cut 680 cuts low enough that it eliminates any far red that sneaks through heavy ND filtration, because 680nm is the limit above which ND filters start passing light, but the dichroic coating that allows for such a low cut is too heavy to use with wide lenses as it causes cyan vignetting. The Tiffen IR ND filter appears to use a yellow-greenish dye that cuts the complement of far red, and since the cameras already have a very effective Hot Mirror built in there’s no need to use an additional Hot Mirror in front of the lens.

That makes the Tiffen IR ND filters the best choice for two reasons: the lack of a Hot Mirror means no worries about color vignetting on wide lenses, and the fact that there’s no dichroic Hot Mirror coating reduces the cost by about US$400 per filter. It’s also important to note:

For example, a Tiffen IR ND .9 combined with a conventional ND .6 will still let through ND .6-worth of far red light. The proper solution would be to use a Tiffen IR ND 1.5.

That the EX1, EX3 and F35 have more than a little in common probably shouldn’t be a surprise considering that they all come out of the Cine Alta group at Sony. They appear to be using similar broad spectrum dyes on the sensors of both cameras, the result of which seems to be an increased sensitivity to far red at the edge of the visible spectrum. As you’ve read in my previous articles, silicon is most sensitive to wavelengths in the infrared range–and the fact that it is also sensitive to visible light wavelengths is pure gravy. The Hot Mirror filters on the sensors actually cut most of the light that silicon is sensitive to (silicon is most sensitive to light in the 1000-1100nm infrared range) in order to make it usable in the narrow band of visible light (380nm-750nm) that we can see. It only makes sense that these sensors should be more sensitive to red, because red is the closest component of the visible spectrum to the range where silicon is most sensitive.

The blue channel, on the other hand, is at the other end of the visible spectrum and has the least impact on silicon. That’s the reason the blue channel is always the noisiest: the weak signal from the blue photosites has to be “pushed’ to bring it into line with the red and green signals.

Thanks once again to camera assistant Rod Williams and to Chater Camera for their help in performing these tests. Any errors, if they exist, are solely my responsibility.