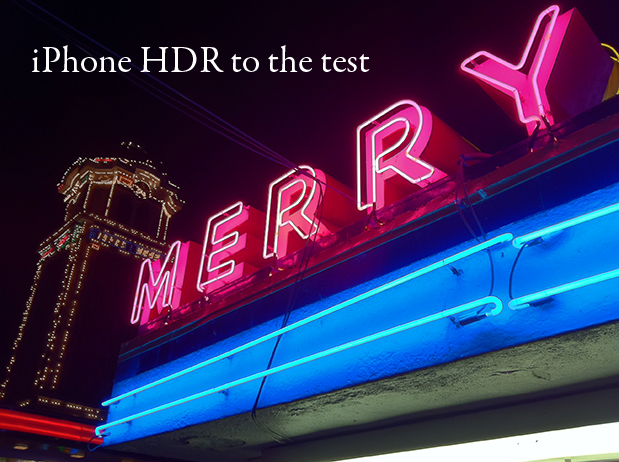 The iPhone4 is not news, but news to me. On my resourceful business side I bought the iPhone4 for the Chase Bank “Square”, which allows the small business person to take credit cards on location and bypass the hidden fees of card companies. On my imaginative side I was dying for the high pixel count, better apps and HDR facility.

Gloating over my new unit, I demanded Karl take me on a date, a working field trip, an iPhone safari. I wanted to go to Lakeside, a 103-year old amusement part on the side of a lake with the Rocky Mountain Front Range as a backdrop. It’s funky and fun, no slick steel, no polished perfection, but all the glamour of yesteryear. Perfect for manipulation with my favorite iPhone apps. This date was a major investment: a motorcycle ride in the bright, warm afternoon, $5 entrance fee and $8.50 for pizza and sodas – that’s total for both of us!

I was particularly interested in getting HDR pictures of sunset across the lake. I hoped for enhanced density and saturation in clouds and sky as well as good details in shadows of buildings and rides. And of course getting detail in glam light bulbs and signs, not the typical blow out of highlights at dusk so you can’t see their structure at dusk when the park illuminated.

The “golden hour” brings the most glorious light, no matter what camera you’re using.

The moment the sun dipped over the mountains and the park lights came on, it was absolutely magic. Just as I knew it would be. By that time we were hungry, but the light! the light! This was no time to stop working, and no time to pause shooting to manipulate images. That would have to wait until later.

I had a flash-forward, scary moment. While photographing the Satellite plane ride, I noticed what looked like a ghost image come up on the screen. In the gathering dark I couldn’t see what seemed to be going wrong in review mode, and so dismissed the fleeting glimpse as my error.

But I wasn’t wrong. There were indeed double images. I had almost 500 shots, and decided to look at them large in Lightroom, to separate keepers, and then re-load only those images into the iPhone for app manipulation in the manner of my choosing. The HDR images were a mess with ghosting that made many unusable.

So what went wrong? The simple secret is that when you make HDR images, of an architectural subject for instance, you use a tripod and cable release for precise registration. Why did I think that I could hand hold an iPhone pointed at moving subjects at dusk?

My bad, but the silly accident turned out some surprising images.

The lighthouse by the boat ride was a total failure in HDR. The scene wasn’t moving but my movement combined with the slow shutter needed for dusk produce unrecoverable distortion and unreal looking sky, even though the structure had good density.
The satisfying faux HDR image was made in Photoshop, with added atmosphere of lighting drawn into the lamp poles. 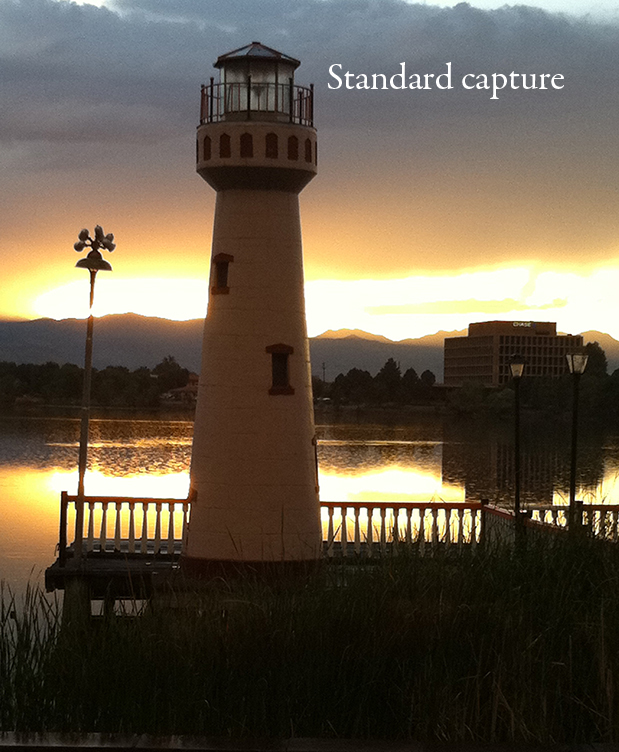 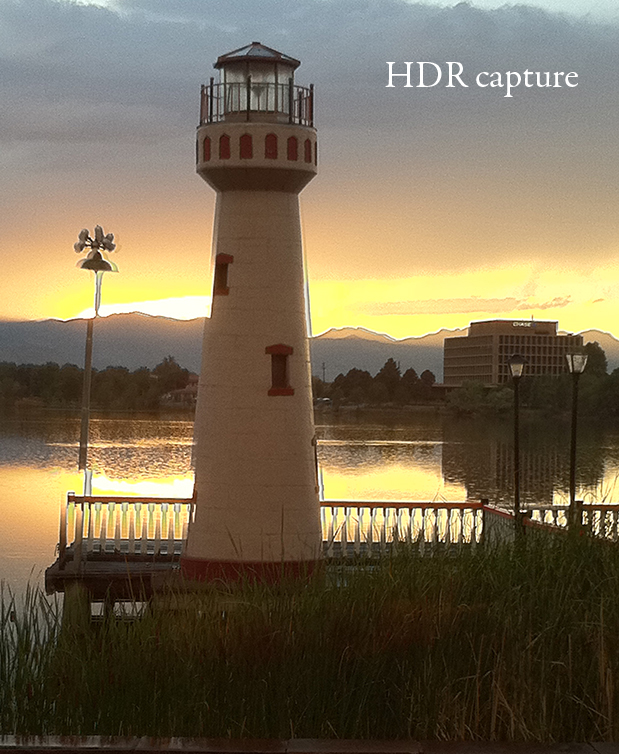 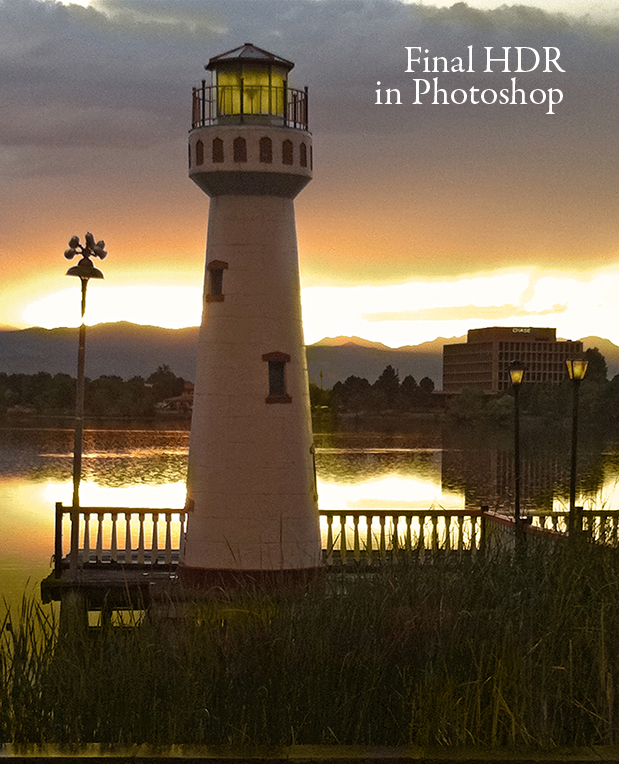 Here’s an HDR success. Neon signage and other highlights fared very well in this sequence, but I felt the tower lights became duller though sharper. I brought out the tower in Photoshop by Lassoing the entire right corner, and feathering the edge of the selection by 50. Levels adjustment was +9 in shadows and 230 in highlights. Slight crop simplified bottom composition. 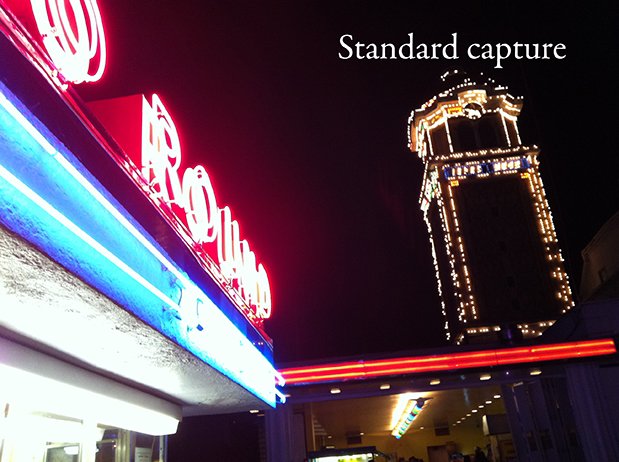 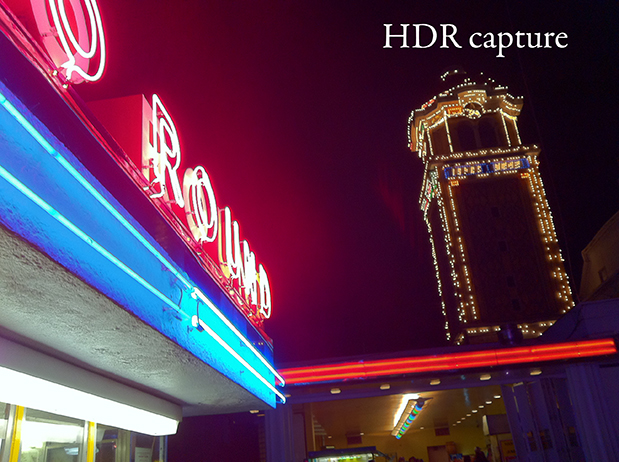 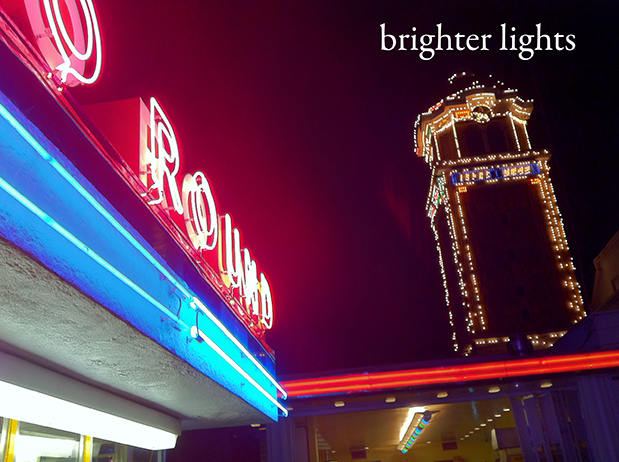 Here’s the most surprising capture, that clearly shows the iPhone HDR makes three images to complete the function. The flying plane ride was the one that alerted me to the ghost image shift of a moving subject. Look closely at the image enlargement to see that three images are captured in the making of an iPhone HDR exposure. The result has some interesting characteristics; what will the iPhone apps make of it? 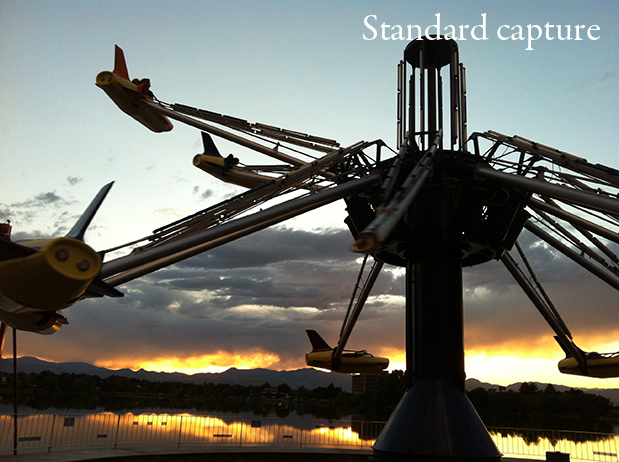 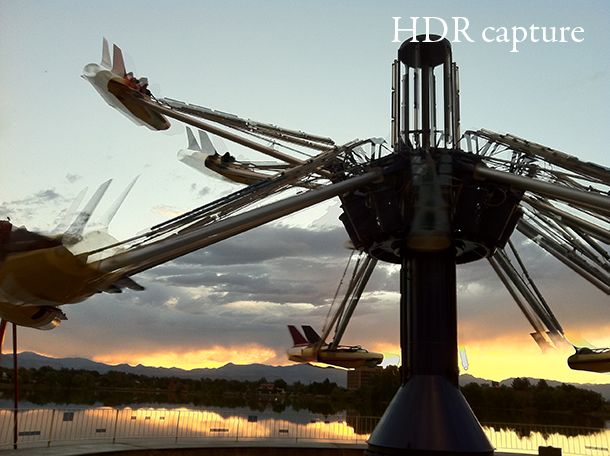 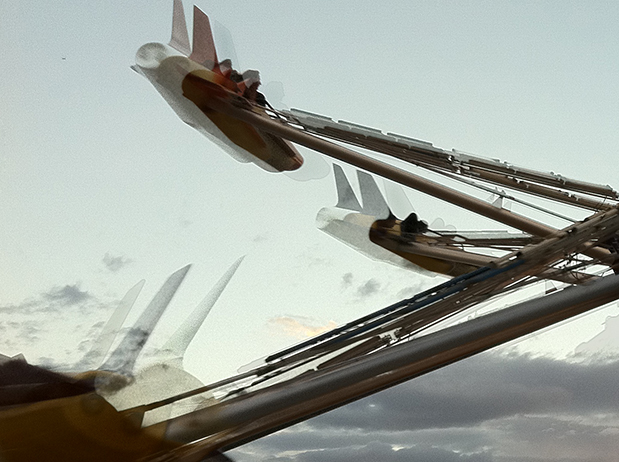