Wherein I use the Discpainter to print 70 DVDs, with reasonable results. 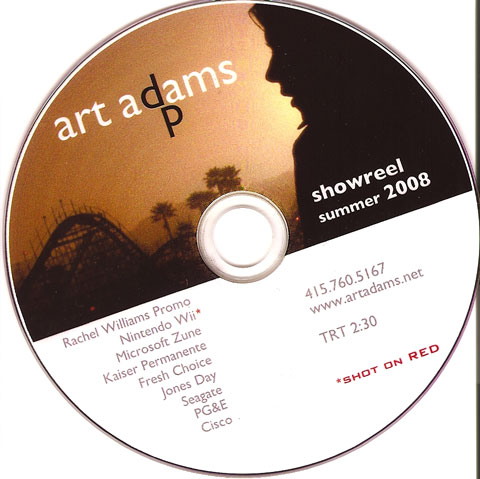 This is what my current Discpainter-painted showreel looks like, minus the dust (added by my rarely used desktop scanner). The dithering is exaggerated here, as it doesn’t look nearly as obvious to the naked eye. You can also see some circular banding across the solid color parts of the image; sadly, that does read about the same on the scanner as it does by eye.

Overall I’m reasonably happy with my purchase. I don’t know of any other affordable technology that would let me print on a DVD in less time than it takes to burn and verify another one. I printed 70 DVDs last week over the course of two days and I only had one small hiccup: the printer stopped responding at one point, requiring me to reinstall the software. Otherwise it saved me tons of time over trying to print the same number of DVDs using my old and finicky Epson R320.

I’ve already written about how clunky the design software is. You may notice that the “d” in “adams” has a slight white outline; that’s because Dymo’s Discus software won’t allow me to change the color of one letter in a text box without changing all of them. I had to create the dark letter “d” in a separate text box and lay it over the white “d”. That’s the best coverage I was able to achieve. Supposedly Disclabel supports the Dymo Discpainter but I couldn’t get it to recognize mine at all. I should probably file a trouble ticket before launching on my next showreel design, as virtually anything is better than using Dymo’s own software. It works, but you won’t like it.

Dymo says to expect 50 DVDs on an ink cartridge. I got closer to 100 before I had to change. Unfortunately the Discpainter doesn’t tell you when a color is running low. You just have to notice that your results are starting to look very “minus cyan” (or whatever color might be running low).

The bottom line: the 3-color Discpainter does well enough. Most of my pleasure at using it comes from how quickly and easily it prints DVDs compared to other home-grown methods I’ve tried. The quality… eh, that’s another story. But it’ll be good enough until someone else figures out a better way to do the same thing at the same price point.