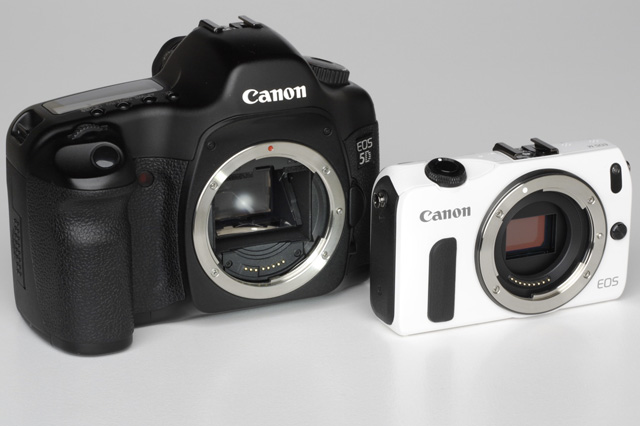 Mirrorless cameras (the name used here, for simplicity sake, refers to the multiple models of the same family, from different brands) may well be on the rise in Eastern markets, they do not seem to be on the way up on the Western front. The recent numbers from market research firm GfK released by Amateur Photographer magazine show that DSLRs sold four times more than CSCs Compact System Cameras) in 2013, in United Kingdom. A similar trend is found in many other Western countries.

The situation is not much different in the United States and the trend is more widespread than some think, or wish. According to GfK, “digital point and shoot continues its decline as consumers increasingly use their smartphones for quick photos they want to upload to the sharing site or social network of their choice.”  However, one side-effect of this that should not be underestimated, states GfK in a recent report, “is that smartphones with built-in cameras have caused a greater number of young consumers to become acquainted with the concept of photography. They also then increasingly go on to buy high-quality products. GfK is seeing significant growth worldwide in sales of cameras with an interchangeable lens, such as single-lens reflex cameras and compact system cameras. A rise has also been observed in compact cameras which display images in high quality and come equipped with a wide-reaching zoom function as well as an image sensor.”

Although GfK and InfoTrends, another market research firm, bet on CSCs (or CILCs) expansion, the truth is that numbers for this type of cameras are down from 2012. In fact, the sales of CSCs indicate that they have done little to fuel growth in the market.

Worldwide, sales of digital cameras are coming under serious pressure. From the beginning of 2013 through to September, volume sales in the digital camera market declined by 17% (excluding North America) and the cause of this fall is often seen as being the smartphone.

That is a relevant point, says GfK, “particularly as the image capture functionalities of smartphones are increasingly improving and mostly probably generate satisfactory results for the consumer. In addition to these smartphones, it is also necessary to keep in mind that a very large number of households already own digital cameras, with worldwide sales of 120 to 140 million per year over the last five years, so that a large proportion of the demand has been met. This is even more important when one considers that when the analogue market was at its peak, between 60 and 70 million analogue cameras were sold per year. This means that today as in the past, nearly twice as many digital cameras have been sold as when the market for analogue cameras was at its best.” 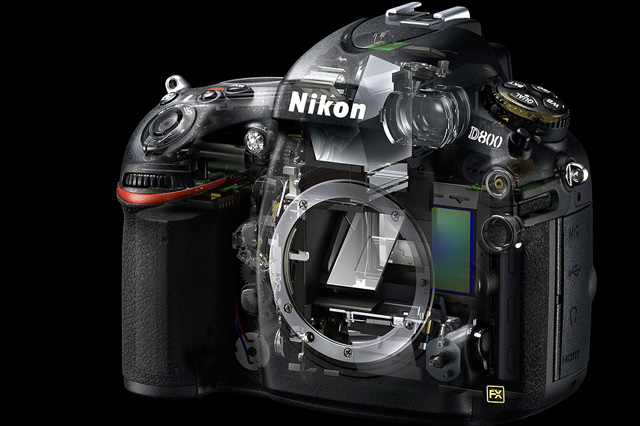 Furthermore, there is a clear trend in the market: the interest in interchangeable lens cameras. That is a market which in 2013 has been growing by over 10%. This makes it possible to put forward the hypothesis that, worldwide, smartphones have been attracting more consumers into photography. That applies to both still and moving images and means that many more videos are being made today than previously, with camcorders. In addition to that, the demand for cameras with interchangeable lenses is growing. If developments in Japan are considered, we see that the SLR market there grew by 35% in the first nine months of 2013. What is interesting, is that the phenomenon is not just among the top-end cameras where sales are growing, but also among the entry-level cameras, i.e. the more simple, less expensive SLR cameras. So it seems that the consumer is undertaking what one could call an upgrade into single-lens-reflex technology, and is in this sector choosing relatively simple entry-level cameras”, concludes GfK.

Faced with these numbers one has to think if Canon has not made a wise choice by not fully entering the CSCs market, only having presented one camera, the EOS M. Recent reports from CSCs sales show that names like Panasonic and Olympus have trouble to keep their business profitable, and brands like Fuji, which X system cameras make the top lines these days, are not even in the list of the most sold 20 models in Japan, where CSCs have their best market. In fact, the  top camera on the list regarding sales of CSCs in 2013 is Sony NEX-5R, with the Canon EOS M in second place… Also interesting is to look at the top 20 of DSLR models sold in Japan: 18 places are shared between Nikon and Canon, what says something about who is who in the DSLR market. 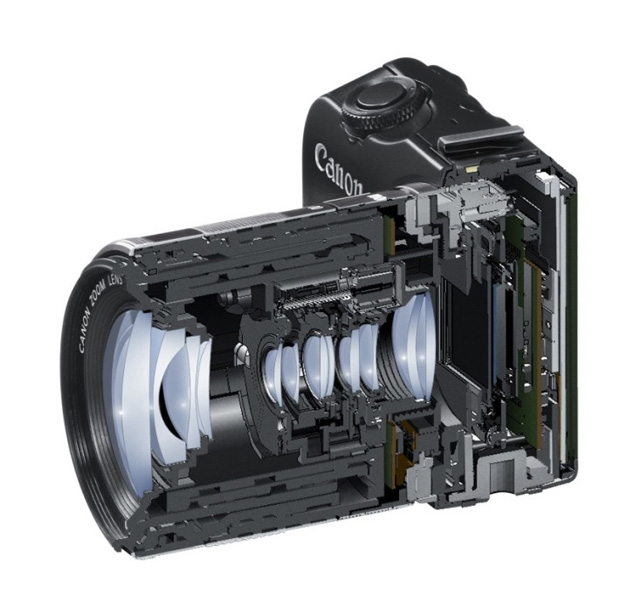 Cameras are Cheaper Than Smartphones

Japan, which is always a market showing tendencies different from the rest of the world, also presents some interesting aspects. According to GfK, “while sales of compact cameras are still in decline, the rate of decline is less sharp than in the previous year. In Japan it can also be observed that with compact cameras, it is not only the upper market segment, where there is solid growth, but also in the under 100 euros market segment, i.e. among entry-level compact cameras. This can firstly be explained by smartphones being 'personalised products' and as a result they will not be handed over to other friends or family members. For this purpose, an additional low-priced cameras will be used, which as a result of technical development, will mostly generate first-class picture-quality.”

A consumer study which has just been completed in the Japanese market, says that currently the motivation to buy a camera in addition to a smartphone, lies with the lower picture quality of photos from smartphones, the short battery life and their complexity in use, as well the poor optical quality of the zoom and the slow autofocus. In contrast to that, it is in particular these aspects of quality which motivate consumers to buy a digital camera. In addition to the above features, which are missing on smartphones, the resolution of the sensor and the price particularly come in for mention – in other words, cameras have now come to look more attractive in terms of price than smartphones.

One interesting note about the market comes from a InfoTrends report. According to InfoTrends’  forecasts, DILCs (Digital Interchangeable Lens Camera) are expected to account for over 50% of total U.S. digital camera market revenue by 2016. InfoTrends breaks the segment into two sub-categories: the digital SLR and the compact interchangeable lens camera. The DSLR segment will continue to account for the majority of sales in this market. Compact Interchangeable Lens Cameras (CILC) are, according to InfoTrends, now gaining significant shares in some regions around the world, but still have not gained a strong enough foothold in the U.S., only garnering a 15% market share in 2012. InfoTrends is forecasting that CILCs will see its share grow significantly by 2016, as consumer awareness of the category grows. Still, among respondents surveyed who plan to purchase a DILC within a year, 77% are thinking about buying a DSLR, 7% a CILC, and 8% are considering both. 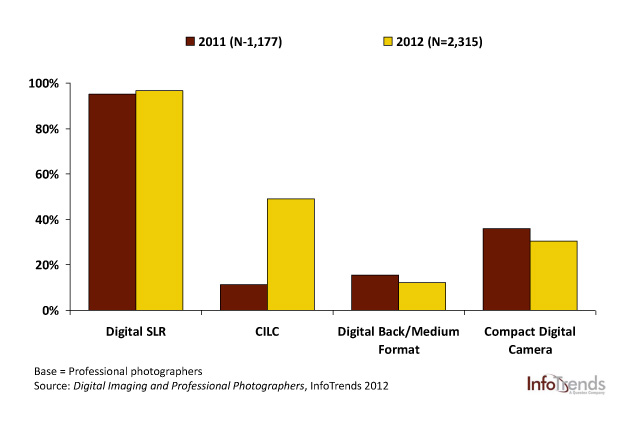 One last piece of information that is interesting to know. According to InfoTrends’ 2012 report entitled Digital Imaging and Professional Photographers, the vast majority of pro photographers currently own DSLRs. Although other camera types are also in use, none are nearly as popular as DSLRs. At the same time, however, the share of professional photographers who reported owning CILCs more than quadrupled year-over-year, rising from just 11% in 2011 to over 49% in 2012.

Although the share of pro photographers who own CILCs has risen dramatically in just a year, ownership is not necessarily an indicator of use. When professional photographers were asked what type of camera they primarily used for work, over 90% cited a DSLR. Meanwhile, only about 1% of pros stated that their primary camera was a CILC. So while CILC ownership is certainly becoming more widespread among pros, DSLRs continue to be heavily favored in terms of frequency of use.