Viewing Premiere metadata while in list view is a great way to see information about your media, and you can same many of those different presets

While we’ve undoubtedly seen a move toward viewing and organizing media via thumbnails in recent years one of the most useful ways to view you media is still in list view. Turning your Adobe Premiere Pro bin to list view allows you to view the many different bits of metadata that are attached to source media. And you can sort you media by those different columns.

Simple things like timecode and duration are two useful bits of metadata built into each clip, even if that that timecode is zero hour 00:00:00:00. Other useful metadata can be added like color labels, comments or a scene take take number. You might need to add camera angles and camera labels for mulitcam editing. And the ever useful usage columns can help identify what has and hasn’t been used in your project.

What’s even better about these column setups in list view is that they can be saved and easily recalled for future use, which is the focus of this article.

There used to be a time in Premiere Pro when you had to venture deep into the Metadata panel for all your list column view saving and organizing. Thankfully updates have come along that moves this useful feature right to the bin menu. It’s those three little lines next to a bin name. Some of us call this the hamburger menu.

Moving this to the bin menu means you can also quickly save new Project View Presets, update existing ones as they change as well as assign keyboard shortcuts to quickly recall them. I have a standard batch of presets that I use across my Premiere installs that include my most useful column list view presets and I wanted to share them here.

When you open the Metadata Display you’re faced with a daunting list of potential items to turn on and off.

There are so many metadata parameters here it really feels like some real untapped potential as far as shoot-to-post metadata goes in Premiere Pro. Thankfully, most all of the useful metadata options can be adjusted and added to within Premiere.

There is no scientific research to how these were setup. They have just evolved over years of use and I created a lot more of them when Metadata displays were moved to the bin menu where they belong. 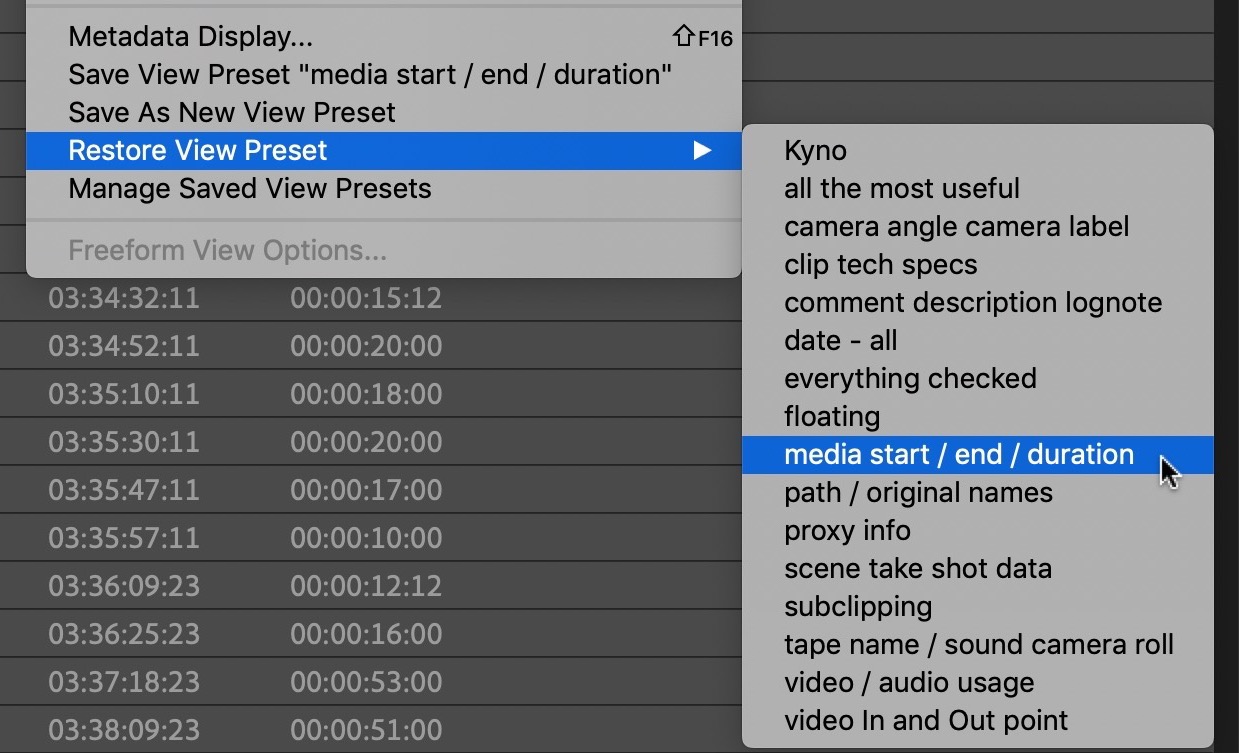 Most of them will go unused as I don’t use many of them myself. A few notes on my presets:

Then you need to place them in the correct folder in your Premiere Documents folder hierarchy. 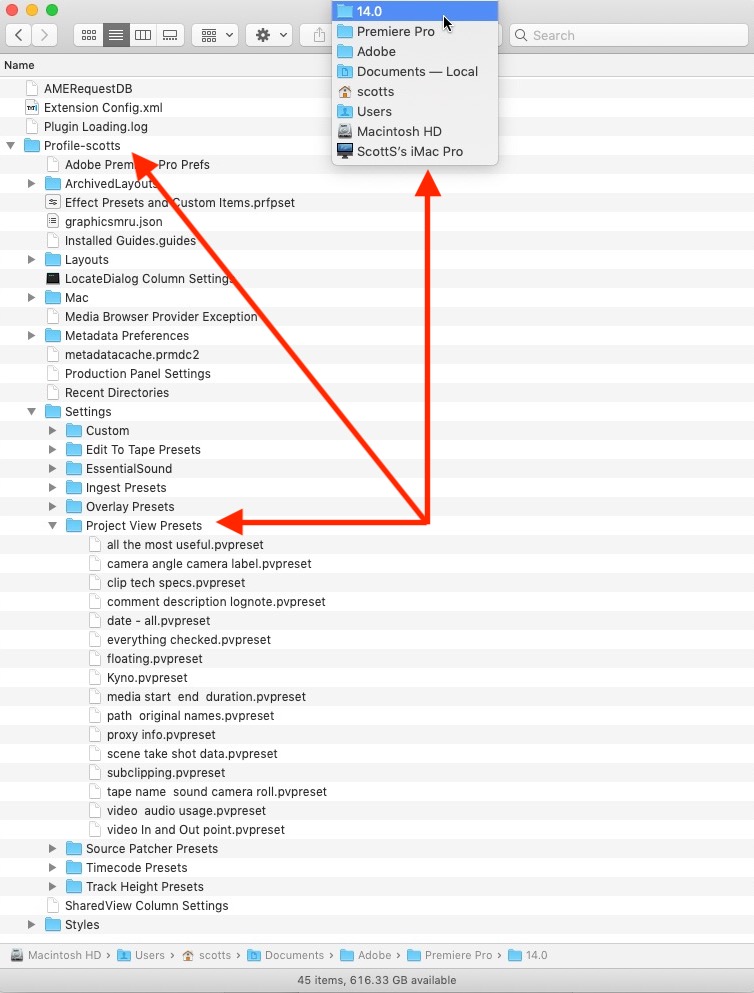 If that folder happens to be missing just head under the bin menu and save at least on Project View Preset and that will create the folder. to recall them just go to the Restore View Preset menu. You can create your own and save them as well. If you change a preset and want to save what you’ve done choose Save Current View Preset.

Depending on your Premiere version the 14.0 might be less. This is on a Mac but I’m guessing it is the same on a PC. I verified that these settings also live in the Documents folder on a PC but I wasn’t able to try my Mac created settings on a PC.

Just downloaded and confirmed this also works on PC

Once installed (and you can even install them while Premiere is running) they should be available in your bin menu.

You have to use the Managed Saved View Presets item in the bin menu to assign shortcuts as well as delete ones you might not need anymore.

And once they are assigned you’ll see the shortcuts in the menu.

It’s worth noting that these saved Project View Presets do not translate to the actual Premiere Pro Metadata Panel. Yep, that’s a strange one I’ve never understood so you might have to still venture into the Metadata Panel and find metadata properties there if you want to assign metadata to more than one clip at a time. Which is something you’ll want to do if you use metadata for most anything, including naming camera and Search Bins.

If you use a Loupedeck you can quickly recall Project View Presets via that device.

If you’ve mapped the Project View Presets to keyboard shortcuts you can implement them on a device like a StreamDeck.

May these presets make your editing faster and easier!