Documentary films often tackle current events to give audiences a deeper understanding of diverse topics and differing points of view. The SXSW Film Festival 2015 lineup of documentary features includes many films that seem to have anticipated what would be topical for this year’s audiences. Although the subject matters vary, an Adobe Creative Cloud workflow is common among many of this year’s documentary features at SXSW. Here, we look at four films that could have come directly from today’s headlines.

Documentary films often tackle current events to give audiences a deeper understanding of diverse topics and differing points of view. The SXSW Film Festival 2015 lineup of documentary features includes many films that seem to have anticipated what would be topical for this year’s audiences. Although the subject matters vary, an Adobe Creative Cloud workflow is common among many of this year’s documentary features at SXSW. Here, we look at four films that could have come directly from today’s headlines.

The documentary feature Peace Officer from directors Scott Christopherson and Brad Barber explores the changing behavior and perception of police officers in the United States. The film focuses on Dub Lawrence, a former Utah sheriff who in the 1970s founded the same SWAT team in Utah that killed his son-in-law in 2008. After meeting Lawrence and learning about his mission to understand what happened, Christopherson and Barber decided to make a film that investigated this and other cases characterized by volatility and violence.

A former sheriff will stop at nothing to confront the SWAT team he founded.

The film was shot on and off for a year and a half using Canon 5D Mark III cameras. Christopherson asked Renny McCauley, a friend from graduate school to edit the film’s 150 to 200 hours of footage. McCauley used Adobe Creative Cloud applications in the post-production process, including Premiere Pro CC which enabled him to edit natively without transcoding.

“Markers in Premiere Pro let me tag great moments in interviews, so I could easily locate them within a clip or sequence while I was editing,” says McCauley. “I also liked using different color clip labels in Premiere Pro to label entire scenes that either didn’t work or that I wanted to move to another location.”

McCauley used Lightroom to view Lawrence’s vast library of photos and Photoshop to color correct images selected to help tell the story. Photo moves were baked in with After Effects, which was also used to create temporary titles. With the team in different locations, Creative Cloud supported a collaborative workflow that included sharing H.264 footage exported with Adobe Media Encoder.

“I did a lot of assistant editing work on the film and it was great having Premiere Pro as a common platform for our team,” says Christopherson. “We’re thrilled that Submarine Entertainment picked us up and hope to get it out to the masses beyond the festival circuit.”

The world premiere of Peace Officer can be seen at the Stateside Theatre the opening weekend of SXSW.

When Women Rising’s Founder Sara Hirsh Bordo became co-founder and executive producer of the first TEDxAustinWomen event she invited Lizzie Velasquez to participate. Little did either of them know, this would be the first step on their journey together to tell Lizzie’s story. Afflicted with a rare syndrome that prevents her from gaining weight and bullied both as a child and later online as a teenager, Lizzie refused to be a victim and instead became a hero. After the English and Spanish versions of Lizzie’s TEDxtalk garnered 10 million views on YouTube combined in less than a month, Bordo asked for the honor of telling her story through a documentary.

With permission from Lizzie and her family Bordo and her team launched a fundraising campaign, which became the fourth largest 30-day or less campaign on Kickstarter. Women Rising and Chipotle Films created the explainer video for Kickstarter using After Effects and Premiere Pro and later used After Effects for all graphics and photo treatments in the film. After shooting around the world – from Washington DC, Austin, and Los Angeles to Mexico City, Barcelona, and London – the film was edited in Austin by Christopher Roldan, who was also an assistant editor on BOYHOOD.

In anticipation of the world premiere of A Brave Heart: The Lizzie Velasquez Story at SXSW, Co-editor Jose Marcelino Ortiz cut a trailer for the film using Premiere Pro. The team used Creative Cloud applications throughout the life of the project and is honored to be premiering during the opening weekend of SXSW in the Paramount Theater.

Bullying and harassment in the video game world (GTFO: Get The F% Out, Documentary Spotlight)

While working at a production company in New York in 2012, Shannon Sun-Higginson received a video stream showing a woman being sexually harassed during a gaming tournament. Intrigued by the topic, Sun-Higginson soon discovered that this wasn’t an uncommon or isolated incident. A week later, she started shooting GTFO: Get the F% Out at a gaming festival in Boston. She worked nights and weekends before launching a Kickstarter campaign in March of 2013 that was 150% funded. 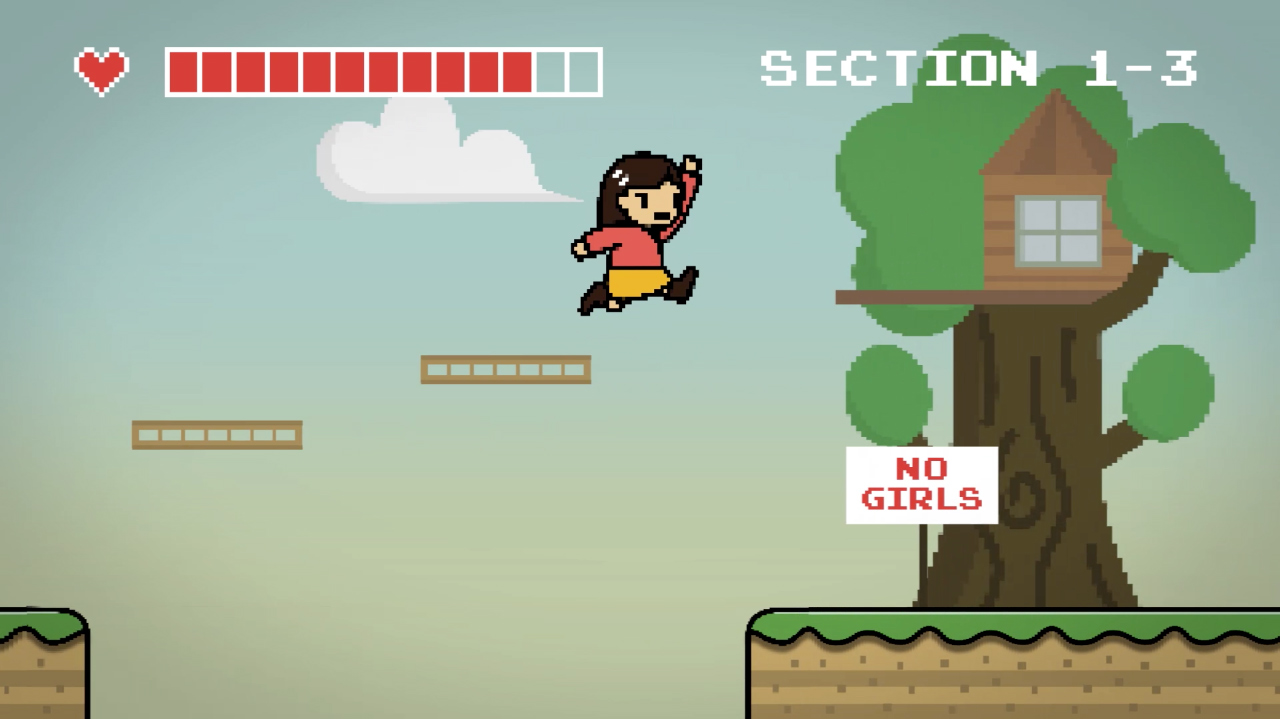 Sun-Higginson shot nearly the entire movie herself, traveling to gaming conferences and taking time off work so she could focus more completely on the film. The two editors she hired to work with her on the film, Ian Park and Ephraim Kirkwood, were up-and-comers like herself. Using funds from the Kickstarter campaign, she purchased Adobe Creative Cloud for teams so they could work together and see each other’s updates.

The film itself takes the form of a game, divided into levels with obstacles that need to be overcome. To help tell the story, GTFO incorporated numerous types of video content, ranging in codecs, wrappers, sizes, and quality. “Premiere Pro was our best option at tackling the footage in a timely manner, without having to transcode hours and hours of footage,” says Park. “Another huge deal for me was its slew of built-in audio filters in Premiere Pro, as well as the ability to use Red Giant plug ins within Premiere Pro to do on the fly color correction and graphic treatments.”

The film was completed before GamerGate in 2014, but Sun-Higginson added an extra scene addressing the now notorious incident. The film premieres the opening weekend of SXSW in the Rollins Theatre at The Long Center.

Rolling Papers is not a marijuana issue film. Instead, it’s a film that documents what happened in Colorado during the first year of legalization, walking the line between being comedic without it being a cheesy stoner documentary. Director Mitch Dickman and editors Zack Armstrong, Davis Coombe, and Tim Kaminski meet the topic head on by following along with the world’s first marijuana editor, Ricardo Baca, of The Denver Post’s media outlet The Cannabist.

A Sea of Green in Rolling Papers, Zack Armstrong/Listen Productions

Dickman and Armstrong met in film school in the early 2000s and have been working together ever since. With Rolling Papers they took an observational approach, shooting on a Canon C300 and figuring out the story and characters as they went along. It was the first project the team edited with Premiere Pro, and they loved not having to transcode and being able to easily pass files around.

Titles were done in Premiere Pro, and After Effects and Photoshop were used on all of the animations in the film. Media Encoder and the publish direct to Vimeo preset helped the team export footage to show the film’s progress to producers all over the country.

Rolling Papers premieres at SXSW on Sunday, March 15th at 9:30pm in the Vimeo Theater.