Get Professional Results in 4k & 60p with a Prosumer Quadcopter

Since the DJI Inspire 1 was announced back in November of 2014, it took a long time to finally get my hands on one to test for any length of time. I finally got to borrow a brand new one from Eric Cheng of DJI for a few weeks in early April, but to really put this thing to work and test in real-world shooting scenarios, I turned to the guys at Multicopter Warehouse to provide me with a dual-controller unit for a series of productions. This is just part one of a series of articles I’ll be writing over the next few months of putting this incredible quadcopter to the test in real-world scenarios!

Since the DJI Inspire 1 was announced back in November of 2014, it took a long time to finally get my hands on one to test for any length of time. I finally got to borrow a brand new one from Eric Cheng of DJI for a few weeks in early April, but to really put this thing to work and test in real-world shooting scenarios, I turned to the guys at Multicopter Warehouse to provide me with a dual-controller unit for a series of productions. This is just part one of a series of articles I’ll be writing over the next few months of putting this incredible quadcopter to the test in real-world scenarios!

First, a bit about the DJI Inspire 1

Back in Novemeber, 2014 I wrote about the exciting release of the DJI Inspire 1 quadcopter here on PVC. What’s revolutionary about this design are features not found on any other “prosumer” level RTF (ready-to-fly) multirotor UAV on the market. Features such as landing gear and props that raise up out of the way of the camera’s view, allowing an unobstructed 360º rotation, and utilizing a second controller just for a gimbal operator – plus an integrated 4K camera and true HD Lightbridge FPV live video streaming. Those features have previously been reserved for multirotors like hexs and octos carrying much larger cameras and running into the tens of thousands of dollars.

You’ll get a solid 20 minutes of active flight time with the Inspire 1 – maybe 15 minutes if you’re really fighting the wind or going full-tilt the entire time and leave plenty of reserve to get yourself safely landed.

The live HD FPV video that feeds through the DJI Pilot app (iOS/Android) to your tablet or smartphone is clear and brilliant. The HDMI feed out of the RC controller gives a live HD stream from the Inspire’s camera at 720p – which will work great for most live broadcast production.

The 4K video is beautiful and the 1080p/60 is stunningly clear and smooth. The video options work great with most any video production, and you can even change camera settings/options mid-flight right from the Pilot app so you don’t have to land the craft to make changes or switch between video and still shooting.

The design of the Inspire 1 allows it to be flown in windy conditions and still maintain a smooth, stable camera operation. Just wait until you see some of the example videos I have to show you! 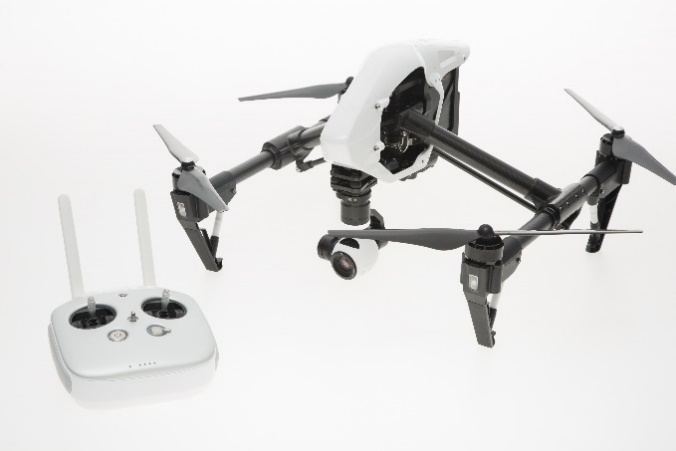 You can get more specs and feature info here from Multicopter Warehouse in their Inspire 1 page.

I’ll be sharing my own experiences flying and shooting with the Inspire 1 and will highlight many of the features I like – what I find useful and what might need improvement from a production standpoint. I plan to use it in several real-world productions and share with you how it works into our production workflow with other cameras.

What makes shooting video with the Inspire 1 different from other quadcopters?

One of the things I like best about the Inspire is the camera. After all, that’s why I fly these things!

Being able to change the camera settings/controls on the tablet at any time is a great feature and really frees up your ability to be creative mid-flight. It also lets you do a quick setup before you take off to ensure your exposures will be approrpriate for the shots you’re trying to take so you can concentrate on flying and positioning the camera to capture the shot.

Of course this example screenshot of the DJI Pilot app was while the Inspire 1 was still on the ground before taking off (it takes two hands to screen grab off an iPad) you can see that manual ISO, shutter and EV values can be set and locked-in.

I also use the provided ND2 filter almost exclusively for exterior shots to provide better images. This shot of the Amtrak train was taken from 4K video near sunset. The natural motion blur in the frame around the perfectly in-focused train engine makes the resulting footage more film-like in quality but also results in beautiful still frames as well! (click on the image to see a larger version with more detail)

I’ll be sharing more videos and still images shot with the Inspire 1 throughout my series of articles here on PVC, so keep coming back to see more updates!

Another HUGE feature that no other RTF (ready-to-fly) quadcopter on the market has to offer is the built-in LightBridge streaming HD FPV video capabilities. Not only does this provide clear FPV back to the DJI Pilot app for both single and dual controller operation, but the RC controllers also have an HDMI out port on the back which allows you to either view the 720p HD signal out to a reference monitor or to a live broadcast switcher like a portable NewTek TriCaster. (*Note: I hope to be testing this more with a TriCaster Mini this summer)

Earlier this year, my friend and colleague Eric Cheng (DJI’s Director of Imaging Products) went to Iceland and managed to fly a couple Inspire 1s over the Holuhran volcano streaming LIVE HD video from the 2 craft for ABC’s Good Morning America. This was a TV production first and only made possible because of this new technology! Here’s Eric’s account of the event in video:

Also, unlike other quadcopters on the market that require the single operator/pilot to also focus their attention on shooting video or photos looking solely at the FPV screen to line up their shots while keep the other eye on the position of their craft, the Inspire 1 allows you to use dual remotes and two operators – one pilots the craft while the other controls the gimbal, positioning the camera to capture the shot.

This requires a bit of practice to learn to work together, but a two-person team can definitely achieve some amazing shots!

Here’s a few short clips of an early morning flight in San Francisco at the coast at sunrise, shot in 4K with dual operator remote:

This is also a good setup to share your flying experience with others or teach new students how to fly/shoot.

We had a couple days of workshops at NAB Show 2015 out in the desert ghost town of Nelson, NV where students got to try various craft, including allowing them to take the gimbal controls and shoot various buildings and I few a pass over the town. I’ll be sharing more of the video experience in an upcoming installment of this series.

Here’s a video that I made comparing the Inspire 1 to the Phantom 3 last weekend, when my friend and colleague Ryan McMaster brought his two Phantom 3s out to the bay area to fly with me. We did some dual op flying around the Bliss Dance sculpture on Treasure Island in San Francisco (just before they took it down the following day). Ryan is a professional multirotor pilot and regularly flies a large CineStar multirotor with larger cameras in dual operator mode with a gimbal operator. So I had him pilot the Inspire while I controlled the gimbal. The shots you can get are truly amazing! As you’ll see in the second half of the video out at the Unknown Shipwreck, we were both flying the Phantom P3s – which offer a different kind of shooting experience, with a similar quality camera to the Inspire and using the same DJI Pilot app.

I will be going into more detail about shooting in dual operator mode in my next installment of this series.

There’s just so much more to explore with the Inspire 1!

CLICK HERE for Part 2: Dual Operator Controls with the Inspire 1

Jeff Foster is a published author of several how-to books and training videos in the motion graphics, animation and video production industries and is an award-winning video producer, trainer and artist. Visit his web site to learn more about his training methods, tips & tricks at PixelPainter.com