All the clean power you need on location.

I don’t know about you, but I don’t try to create images like everyone else. To that end, I often end up with equipment needs to handle the type of work that I do, and sometimes that equipment either isn’t made, or isn’t made the way I’d like it, or is really expensive. I rent what I need on occasion, but I like to own the core of the equipment I use regularly. I always know what state of repair it’s in, it’s ready at a moment’s notice, and I know how it works.

As a commercial shooter, many of my clients don’t have the ability to offer me the luxury of shooting everything they need (or everything I want to) at sunrise or sunset. In the middle of the day, I have to be able to light people and things to make them look incredible and able to reproduce accurately on the final medium. I like to light my subjects carefully and powerfully, as much in-camera as possible.

I do have some portable lighting by Lumedyne, it’s fantastic stuff. Runs on batteries, provides a lot of light, and reasonable recycle times (about 5 seconds at full power). There are times, however, that I need more and faster light. I can use my Dynalite gear if I have power, but often I’m in a remote location with no electricity. I’ve rented generators in the past, but they have several disadvantages. They’re huge. They’re heavy. They use gas, so they have to be transported carefully and they stink. And for any of you who have ever used one, you know how loud they are. Forget working with people using them, unless you run a LOT of extension cords and keep them far away. And make sure those extension cords are heavy gauge, or they can catch fire.

I had seen a product that Dynalite makes, the XP1100. It’s a portable, battery-powered inverter box, that can handle a Dynalite 1000 watt/second pack at full power for up to 200 flashes. This was interesting, but I’d need a few extra batteries at least for a full day of shooting. And it’s a pricey unit, at around $1400 (comes with one battery).

There are other products on the market, the Paul C Buff’s Vagabond II is smaller and way less expensive, but uses 2×150-watt inverters. That may work with a 1000 watt/second pack but the recycle times are around 10 seconds. Worthless for shooting people, what subject wants to wait 10 seconds between images? That will get old pretty fast.

Same thing for Innovatronix’ supposed 1200 watt battery/inverter setup. I tried one, and if they’re lucky that’s a 300 watt pure sine wave inverter inside. It powers some of my Dynalite packs but not others, and recycle times would put you to sleep.

I took these ideas and looked into building my own. Something capable of easily a full day of shooting, something safe. I found an 1100 watt pure since wave inverter, an Exeltech XP1100 (coincidentally the same name as the Dynalite unit). I connected it simply to an Optima deep cycle marine battery. Deep cycle batteries hold more of a charge and can be discharged further down than a regular car battery. The Optima has plenty of starting juice, so no problem outputting a couple hundred amps for a short period after each shot. And it’s a sealed battery, so it is sturdier and leakproof compared to a regular car battery. 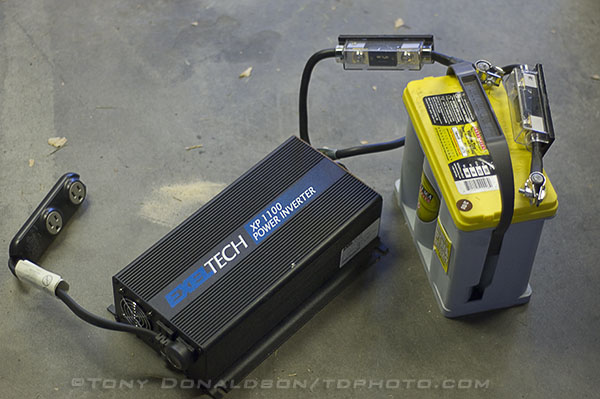 Here’s the whole setup outside the case. It’s pretty simple, just a battery connected to the inverter with heavy cables. Don’t forget the inline fuses! 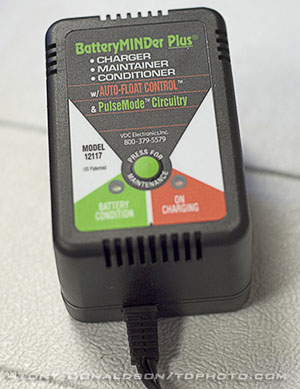 I carry spare fuses and an overnight charger in the fancy case, er, wheeled cooler that I put it in. 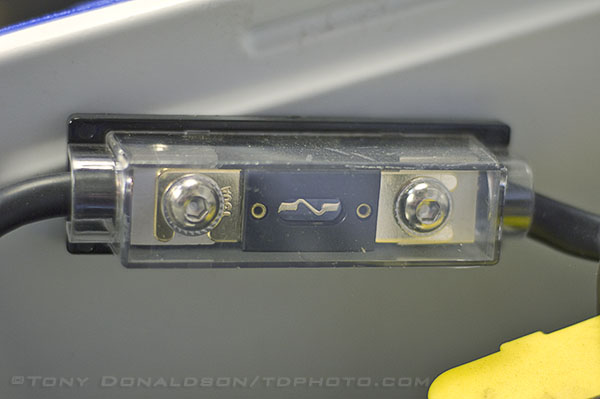 The battery makes it heavy, but compared to a generator, it’s light.

My first test of it was just setting up a single head connected to one of my Dynalite 1000 watt/second packs, outputting full power to the head and using a Pocketwizard Multimax as an intervalometer/counter. I ran it at 3-second intervals, it only takes 1.8 to recycle at full power. This gave it a test probably above and beyond what I’d ever really push it in the field. The fans on the inverter finally came on at almost 600 pops, and the battery was pretty much spent at 650. That’s easily a full day of shooting.

In the field, it’s a dream. Silent, as fast and clean as household power ANYWHERE, and it has even powered a 2000 w/s pack at full power on a couple of occasions. I can use jumper cables to power the inverter from my truck’s battery as well, for almost unlimited power on location. 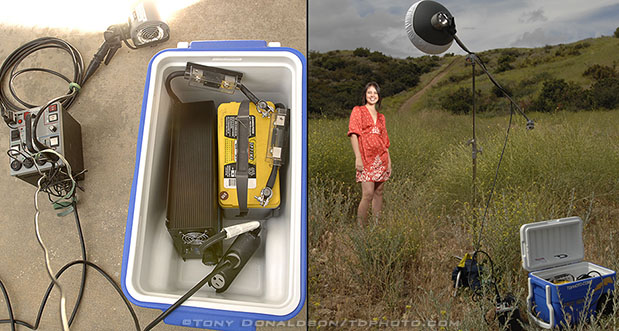 If you decide to try a project like this, PLEASE have knowledge of AC and DC electricity or find an electrician to help. This thing pulls a LOT of amps on the back side of the inverter, the kind that can kill you.

This is the first of many technical and DIY projects I hope to put up here. Feedback is welcome, as well as suggestions on how to make these things better. Like I said, there are things that either aren’t made, or don’t quite suit my needs to be able to create the kind of images I want to make, so sometimes it’s better or more fun to make them to work with the way I work.

A portable power station may be your first choice for when you’re away from regular energy sources and still...