#3 To Pro Tools or not Pro Tools

Much like the heated debate between which is best – Mac or PC, a similar debate rages on in the Digital Audio Workstation  (DAW) world namely: to Pro Tools or not to Pro Tools.

A DAW is a miraculous series of interconnected systems that together allow for the recording, editing, manipulation, mixing and creation of many types of outputs of audio. Each DAW has various features and interfaces making it unique but essentially they are a combination of an audio recording, editing and mixing device. There are many DAWs available today, from free ones to very expensive hardware dependent ones. 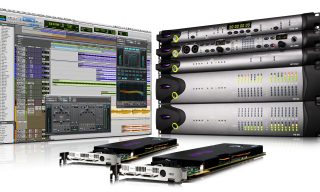 Pro Tools is made by Avid, the same company that makes the Media Composer non-linear picture editing system. Pro Tools is an industry standard DAW. There are those who swear by Pro Tools, those who prefer Apple’s Logic Pro X or Adobe’s Audition, and still others prefer Nuendo or Cubase and there are others as well, of course..

So many choices, what to choose? Like all things – the simplest answer is – it depends. I can tell you, that here in Hollywood for post audio, Pro Tools is by far the preferred format. Since most professional projects get audio posted with Pro Tools, the transfers and portability in that regard are very useful.

Like all technology, each of these various DAWs have learned to adapt, grow and change in iterations in relation to the changing technology of computing systems. Sometimes there is a slight edge in one or another program but for most users it comes down to needed audio functionality and the user interface. Over the years there have been versions of software that are hardware dependent, and others that can stand alone with only the host computer’s abilities. All of these programs have lasted the test of time and it’s not about the quality of the software, they are all world class, but rather it’s about its usefulness in your audio needs.

Each of these programs have wonderful things to offer individually. Logic Pro is frequently used by film & TV composers who can take advantage of its extensive midi capabilities (electronic musical instruments) as well as its superior time, beat, rhythm and pitch options required for digital music creation and manipulation.

Many of these programs have a deep and long history. Cubase was available on the Atari computers from the 90s, as was Logic. These programs have not only developed sophisticated sound capabilities over the years, but they also have a user base that has grown accustomed to the interface and internal workflow making it their preferred program over the years.

In the world of professional audio, a decade or two back, when digital audio was a rapidly growing technology, Pro Tools (originally Sound Tools) was not only simple to use but it also had extensive computer to machine abilities. This reliable functionality of Pro Tools with audio and video decks made it the go-to DAW for all of the audio requirements of sound for picture. It has become the defacto standard in Hollywood. I’ve layed back tapes when the whole system froze and Pro Tools still reliably printed the tracks to tape. Once the lay back to tape was complete I would crash the computer system to get that back to square one!

One of the great things about Pro Tools is that it is a virtual version of what we audio engineers are used to from analog days. One full window is a series of tracks of audio, printed across as if it was a virtual piece of tape. The other full window is a virtual mix console, laid out like all the consoles we’ve used for years. This familiar looking interface of Pro Tools allowed those of us who worked with decks and mix boards to jump in quickly. You assign the inserts and bus and route tracks very simply and intuitively. Power users of Pro Tools like me have many things we’d like to see changed, updated or improved, but that is an article for another day!

One of the most powerful aspects of Pro Tools is the ability to create the virtual mixing board. Creating tracks, busses, auxes, VCAs, sub-mix tracks, final mix tracks, anything you need with the click of a mouse. When it lays out it looks just like a familiar mix board that we all know. Nowadays mix boards have become – control surfaces. These surfaces give Pro Tools, and other DAWs a tactile, hardware feel, while retaining the deep capabilities of the computer software program. The problem for me, back in the day when learning it, was getting used to the “virtualness” of these surfaces. Some surfaces have audio capabilities as well as the computer functionality. So you could plug a mic into “1” on the back of the board. However you could move that record track “1” to anywhere on the screen and the board will follow. It kept messing with my head and I found myself constantly putting the channel strips back “where they were supposed to be.”

Getting back to the question at hand – to Pro Tools or not to Pro Tools. I’ll have to go back to my original answer – it depends. If you plan on making a career out of audio post then it’s a no-brainer – yes, you will absolutely need to know how to use Pro Tools. Other than that I’d say, if you are just a weekend warrior, or its more of a fun hobby, it really falls to what you specifically want to do with the program and what you have in your budget.

For what it’s worth, as a working professional over the years, Pro Tools is my main workstation. I also use and love Logic Pro X when I am making music. It offers things in ways that Pro Tools does not. I also like Adobe Audition if I am working in the cloud for small video projects and its deep set of restoration tools.

When working in multi-channel audio, when working with large numbers of tracks, when working with gear like HDCam, when delivering large stem outs of audio deliverables, in my experience no other DAW comes close to doing what I need it to do. Of course what I need it to do is deliver complete sets of stems and sub-mixes in 7.1, 5.1, stereo and mono for networks and studios. That is my audio need, yours might be very different. For those of you looking for my specific recommendation, accept my apologies. Or perhaps I’ve offered the answer you were looking for.