Adobe announced today a new wave of major updates for video pros coming soon to Creative Cloud. New versions of the video tools and services, including some brand new apps, will be presented next week at National Association of Broadcasters (NAB) tradeshow. Visitors to the show will see a new Color workspace and Lumetri Color panel in Adobe Premiere Pro, which offers an entirely new color workflow for editors, Adobe Character Animator, an amazing (and fun) interactive desktop animation tool, expanded scope for collaboration with Creative Cloud Libraries and Adobe Anywhere, Project “Candy,” an innovative mobile technology, currently under development for capturing and sharing Looks, and lots of cool new Adobe Magic that make it easy to accomplish tasks that would have been difficult or impossible before.

Watch the Adobe webcast from NAB 2015 to see highlights of the upcoming release.

Key themes of the upcoming release

New color workflows that make color an integral part of the creative process, including the Color workspace in with Lumetri Color panel and scopes in Premiere Pro and new Look support in Creative Cloud Libraries.

Mobile apps and integrations that extend the creative process, such as a streamlined workflow for opening Adobe Premiere Clip projects in Premiere Pro, and new mobile capture technology, Project Candy for creating Looks to enhance the appearance of video footage.

Deeper collaboration for all – from small teams to large enterprises, including asset sharing via Creative Cloud Libraries for mobile-to-mobile and mobile-to-desktop workflows. And Adobe Anywhere, coming soon in two versions, offering collaborative editing workflows for teams of all sizes.

Innovations like these are driving adoption of the Adobe video workflows: recent Premiere Pro converts include the four-time Academy Award winning Coen Brothers, who are currently editing their film, Hail, Caesar!; and director Rhys Thomas and producer Lorne Michaels of NBC’s Saturday Night Live, with Staten Island Summer, a Paramount Pictures production, due out in 2015. In addition, MLB Network switched their editing and post-production environment to a complete Creative Cloud workflow.

“From script to screens, Adobe is delivering advanced workflows for every step of the creative journey. The industry is switching to Premiere Pro CC and our tightly integrated set of video tools because of the constant stream of innovation coming from our labs,” said Steve Warner, vice president of digital video and audio at Adobe.

“Our move to Creative Cloud, with deeply connected mobile-to-desktop workflows and services that make your assets available to you as you move from app to app, ensures our customers have the tools and services to create stunning videos, TV shows, films and commercials faster than before.” 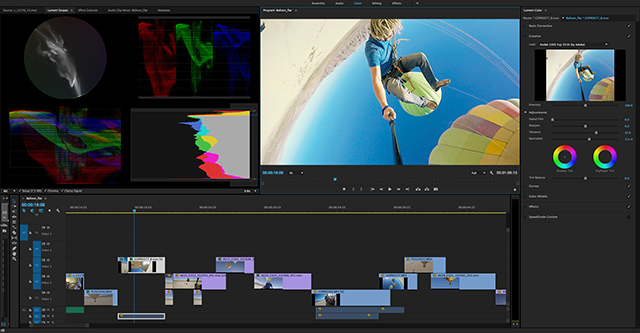 Editors have a lot to look forward to in the next release of Premiere Pro, starting with the all-new Color workspace and Lumetri Color panel providing powerful, yet easy-to-use, color tools inside Premiere Pro. Further extending their creative color workflows, Premiere Pro users will be able to apply Looks captured in the real world with Project Candy to add emotional impact and visual appeal to your videos. Looks and graphics elements will be easily accessed in the application via Creative Cloud Libraries. Task-Oriented Workspaces organize the user interface for the task at hand. Editors can also create and save custom workspaces to include the windows, tabs and tools that they use most.

It will be much easier to deliver polished interview content by smoothing out jump cuts in talking head shots with Morph Cut. Improved integration between Premiere Clip and Premiere Pro will offer a seamless transition from the mobile editing experience to the power of a professional desktop NLE. Other features coming in the next release include more streamlined audio workflows, caption burn-in, improved Mercury Transmit performance for external monitoring with third-party I/O hardware, support for Windows touch devices, new editing refinements, and even more file format support.

The ability to shape light and color is integral to the process of working with moving images,” said Al Mooney, senior product marketing manager. “Color tools should enable play and experimentation. They should be approachable, easy to understand, and easy to include in your post-production workflow.”

To learn more about what’s coming next, visit the Premiere Pro blog.

Project “Candy” is the code name for an amazing new mobile technology, currently under development, that allows users to capture light and color from the things they see around them and save the results as Looks. Look sare like grading presets used to enhance the appearance of video footage, like those you can create in SpeedGrade or now in Premiere Pro.

“The brilliant thing about Project Candy, is that you don’t need to know anything about color grading to use it,” said senior product manager Patrick Palmer. “In the past you would need to be an expert colorist to match the Look of a scene in real-life. With Candy, you just need your phone.”

Looks saved in Project Candy are automatically available in Premiere Clip, Premiere Pro, and After Effects via Creative Cloud Libraries, where they can also be shared with colleagues.

Learn more about Project “Candy” on the Moving Colors blog. 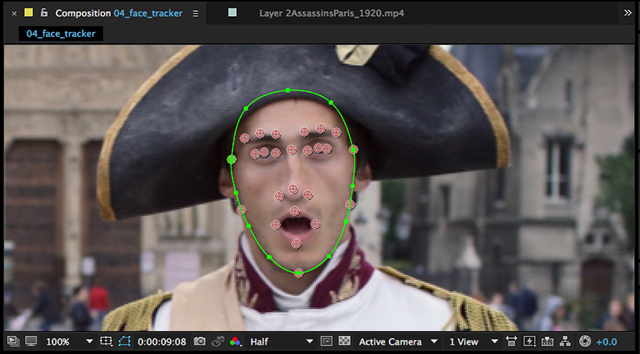 The next release of After Effects will instantly feel faster for users, making it easy to explore their creativity while interacting with the software in new ways. Uninterrupted Preview allows users to explore design ideas, adjust properties, and even resize panels without stopping playback. Simplified Previews offers intuitive default behaviors to help new users get up and running faster while allowing experienced After Effects artists to customize their preview options to fit their preferred workflow.

“The preview enhancements in the coming release provide a more responsive and dynamic environment for motion graphics and visual effects work,” said Todd Kopriva, product manager for After Effects. “This allows artists to focus on the creative process and stay in the creative zone with fewer distractions or interruptions.

Face Tracker is a new feature that makes it easy to map facial movements with exceptional accuracy, managing the level of detail you track. Users can use simple mask tracking for fast tracking (for example to blur out someone’s features) or use more detailed point or measurement tracking to apply precise effects, or export tracking data to Adobe Character Animator.  Other enhancements in the new release include a more adaptable user interface and support for using touch controls to navigate between panels within the app.

Learn more about what’s coming next on the After Effects blog. 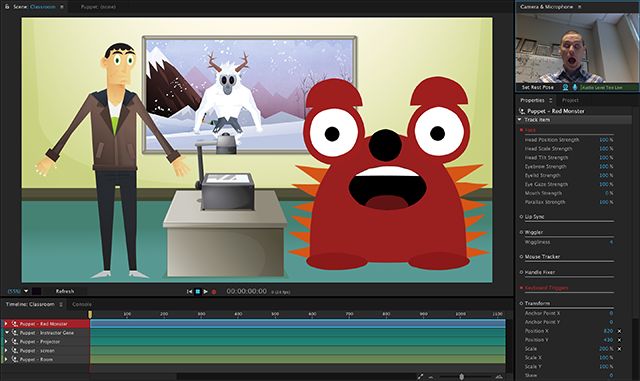 Adobe Character Animator offers a groundbreaking new experience for After Effects users – using your computer’s webcam and microphone along with keyboard and mouse interaction allow users to animate characters created in Photoshop or Illustrator in real time, shaving many hours off the creative process.

“Character Animator makes it incredibly easy to bring life-like behavior figures and insert them into scenes including other actions like wind or snow,” said Kopriva. Users can record multiple takes and then stitch together the best performances for a great result. The best thing about it? It’s so much fun to use!”

Learn more about Character Animator on the After Effects blog – or watch the video on YouTube.

The next release of Adobe Media Encoder includes Time Tuner which lets editors and broadcasters automatically adjust the duration of broadcast deliverables­— without time-consuming micro-editing. Time Tuner will be available in the next release of Adobe Media Encoder CC. Video pros will also be able to output multichannel audio with new Dolby Digital and Dolby Digital Plus support in Media Encoder. And we’re adding support for encoding and decoding of JPEG 2000 in an MXF wrapper.

Learn more about what’s coming to Media Encoder on the Premiere Pro blog.

Editors and audio pros can get right to work, streaming native video formats inside the next release of Adobe Audition with Dynamic Link video streaming, and review full screen video on a separate monitor while editing audio. Live re-linking allows users to replace assets within an open project and retain edits made to original clip.

Learn more about what’s coming next on the Adobe Audition blog.

More video updates
Adobe Prelude CC users will be able to record voice-overs with their video capture as audio notes or for on-location reporting. Bring editing projects into the Adobe SpeedGrade CC with Direct Link, now including support for the new Premiere Pro Lumetri color tools.

Adobe Anywhere is a breakthrough workflow platform that lets workgroups using Adobe Premiere Pro and Prelude collaborate with centralized media and assets across standard networks. Adobe Anywhere will soon be offered in two versions. A new, more cost-effective version of Adobe Anywhere will be available for teams of all sizes collaborating in a single location. Anywhere with Mercury Streaming Engines allows enterprise workgroups in multiple locations to work together on projects with shared access to all assets.

“The digital world is a connected world,” explained Bill Roberts. “Modern creative tools should reflect this and empower collaboration, whether in simple ways, like showing a client your work, or in complex remote production settings where artists around the world can work together on the same content even at the same time.”

Join Adobe Creative Cloud Complete by May 29, 2015, and we’ll give you 40% off for your first year– that’s only US$29.99/month. Whether you’re moving up from Creative Suite, or moving over from Apple Final Cut Pro, Avid Media Composer, or Grass Valley Edius, there’s never been a better offer for joining Creative Cloud. Some conditions apply –  Visite the Creative Cloud video page to learn more.

“These new releases will mark a significant step forward in our vision for a truly dynamic creative environment,” said Bill Roberts, senior director of product management. “In the past, production pipelines have tended to be strictly linear with functions such as VFX and Color Grading being relegated to the end of the process, but  connected creativity is much more freeform and great ideas can come at any point in the production process. Creative tools should work the way creative people do, and not the other way around.”

Learn more about the Adobe Creative Cloud pro video tools or visit the Adobe NAB Reveal YouTube playlist for demos of many of the new features described in this post.

Join #TeamAdobe on April 16 for a special webcast right from the NAB 2015 show floor to see the top new features in action. 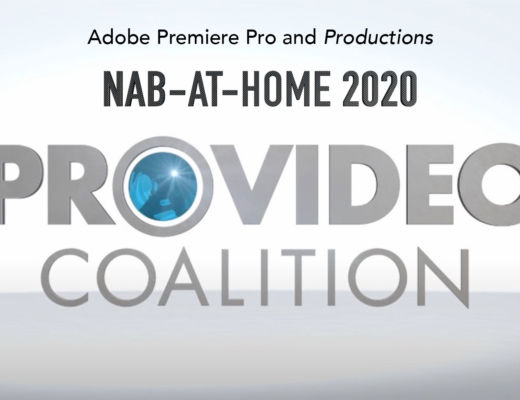 Since we’re not at NAB we thought we could continue our usual NAB chats with various vendors about what... 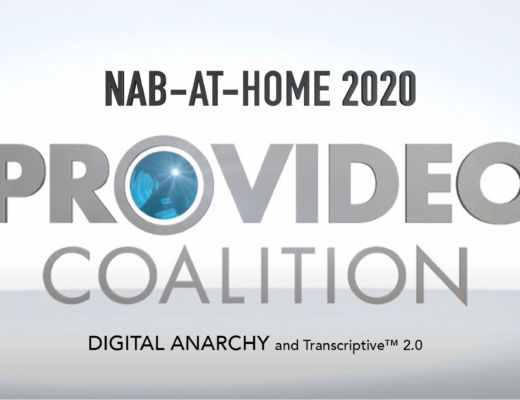 One of my favorite plug-in panels for Adobe Premiere Pro is the transcription and text search tool Transcriptive from...