As you are probably aware by now, we’re going to go through our book Creating Motion Graphics with After Effects 5th Edition (“CMG5” for short) and pulling out a few “hidden gems” from each chapter. These will include both essential tips for new users, as well as timesaving gems that experienced users may not be aware existed.

The third chapter in CMG5 shows how to animate a layer’s transformations, as well as mastering motion paths:

After Effects CS5 has a new preference to make keyframe icons and handles easier to select when you’re editing a motion path – especially useful on monitors with more pixels. Open Preferences > General and increase the value for Path Point Size, as shown at right. Note that this also affects the size of mask points and handles. 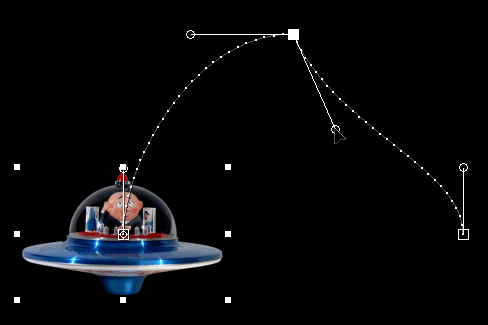 Every tool in the Tools panel has a shortcut to select it, such as G for the Pen tool and Z for the Zoom tool. If you use these shortcuts normally, you’ll find yourself constantly returning to the Selection tool (V) to continue working. So instead of tapping the shortcut key to switch tools, press and hold down the shortcut key to temporarily switch to it. When you release the key, the previous tool (usually the Selection tool) will be automatically reselected. This takes a little practice, but is well worth mastering especially for editing motion paths where you can press G whenever you need to quickly edit handles in the Comp panel with the Pen tool (see the figure at right).

Pressing the Shift key after you start dragging the current time indicator makes it “stick” as it passes over keyframes, in and out points, comp and layer markers, and so on. This helps avoid a common beginner mistake where you might navigate to keyframes by dragging the current time indicator. If you miss by a frame, then edit the layer, you’ll have two keyframes one frame apart – and a likely glitch in your animation (see figure at right). 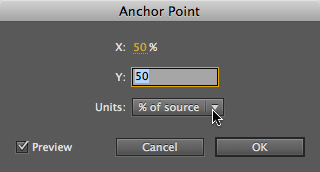 To bring up a dialog to edit keyframes numerically, right-click on a value in the Timeline panel to get the Edit Value option or double-click an existing keyframe. For instance, the options dialog allows you to enter values using various criteria such as Pixels, % of Source, or % of Composition.

As an example, if you wish to set the anchor point back to the center of a layer, right-click on its value in the Timeline panel and select Edit Value. In the Anchor Point dialog, set the Units popup to % of Source, then set both the X and Y values to 50 (see figure at right).

What You See is Up to You!

When you are editing many layers and twirl down all their parameters in the Timeline panel, you’ll quickly find yourself running out of screen real estate and having to scroll up and down. To only reveal certain parameters, you can use the following shortcuts for selected layer(s):