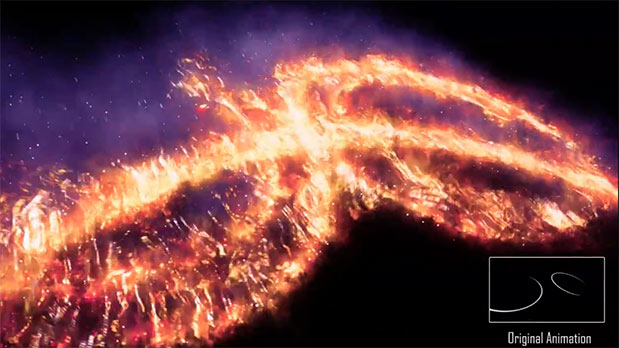 Attempts at creating fire in After Effects have resulted in outputs of various styles and quality. Projects have used CC Particle World, Fractal Noise, and other tools built into AE, 3rd party plug-ins, and composited stock footage often used as a particle source. 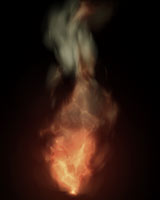 Video Copilot has used fire in projects quite often, especially as a particle sprite and even as shockwaves. Awhile back Andrew Kramer posted an effective campfire or torch-like flame in a free fire project for After Effects:

“Here is a little test I made using CC Particle World and some vector blur to make Fire. It’s not perfect but an interesting study. One of the key things I did was used a wiggle expression on the particle birthrate to give a variable emission pattern like something was burning inconsistently. It’s a little slow to render but it is very high resolution.”

“…I would suggest playing around with fractal noise (fractal type to Dynamic Twist), CC Vector Blur (10-20 pixels, Direction Fading, 2 revolutions, low softness), and Colorama (output cycle to fire). Mask in the shape of a flame, animate the flame by evolving the fractal noise, add some turbulent displacement for a flicker, and then add an adjustment layer with glow over the top.”

In 2007 Maltaannon posted Particle Playground: Fire, also seen on Creative Cow, and later reconfigured it for a demo of Jawset’s AE fluid simulation filter. Lloyd Alvarez also has a tutorial on Jawset TURBULENCE.2D, which is available but supports only CS5. Among other 3rd party filters is Genarts Fire, from the Fluidz module of Monsters GT. And Digieffects Delirium also does fire (with free presets); Mylenium posted some free example fire-generating projects for Delirium users.

Some very nice fire animations with Particular have appeared, like the semi-procedural fire created by Ramiro Fernandez (via @rymden), shown below. Pierre Michel’s Fire Flower video seems to be the gold standard for fire (not for the requisite nude), and was created using footage of fire and Trapcode tools somehow. You can find some detail on the “making of” in interviews at Studio Daily and elsewhere.

Particle Illusion, now from GenArts, has often been mentioned as a better choice for creating fire, but no clear evidence could be found quickly. This may change as the AE version, pIllusionAE, penetrates the market and tutorials show up in more familiar places. As a start, check out the overview video, but note that updates for current versions of After Effects may lag behind.

There are a number of stock footage resources that have fire footage if you don’t want to roll your own or prefer more realism. Artbeats has at least 13 collections featuring fire. Video Copilot has a stock/training DVD, Action Essentials 2 (see the composite demo), and Forging Fire posted about free stock footage from Detonation Films in Free Explosions – Fire – Missile – Decapitation Footage (plus they have a few fiery tutorials of their own).

More recently, VinhSon Nguyen showed How to Use the Displacement Map and Create Heat Waves at his CreativeDojo. Various resources found in Muzzle flash tutorials in After Effects and Toward realistic explosions in After Effects + bang! may also come in handy.

On the AE-List Chris Zwar noted, “In addition to the other suggestions, if you have some footage of fire you can always pop it in front of a light, set the light transmission to 100%, and then the fire will be projected onto your 3D layers.”

Also, Mark Christiansen’s book After Effects Studio Techniques explores best practices of common creative VFX tasks, including those involving light, environment matching, heat, and explosions. One of the chapters is free on the Peachpit Press website: Pyrotechnics: Creating Fire, Explosions, and Energy Phenomena in After Effects. See especially his advice on modes and luma mattes.

Finally, among various other roundups is the recent 50 Photoshop tutorials with Fire Effects at Ants Magazine.

* In Episode 89 – Tempo: Up in Flames – Realistic & Slow-Motion Fire Effects, “Aharon Rabinowitz walks you through the workflow used to create realistic fire for our film Tempo… using a combination of real fire footage, Trapcode Particular, and some 3rd Party plug-ins from Re:VisionFX.” Also useful is 06. Getting Started with Trapcode Particular 2 – Time Sampling by Harry Frank.

* Hugo Tromp posted Put Out A Flamethrower Lookin’ Fire Using Particular, to which you could add finishing touches.

* Film Riot continued a fascination with fire with The Burninator: How to Set Your Friends on Fire! and Explosion Challenge.

* in Solar Atmosphere! Video Copilot uses After Effects to create a complex solar atmosphere, without the need for 3rd-party plug-ins. For more impressive heat distortion, check out their new plug-in Heat Distortion.

* Apparently you can use Trapcode Mir to create fire. For auto-translation, use Google Chrome to view the Japanese website baaaf.com, which also has many free AEPs for a variety of cool abstract effects. Earlier, Harry Frank posted a free preset to make flames in Trapcode Mir, in MIR / Time Controlled Fire.

* Tuts+ postedd an entire course on the topic, Smoke, Fire and Explosions in Adobe After Effects with Christopher Kenworthy, Here’s a sample:

* Improve your aerial explosions with compositing techniques in After Effects by IndependentVFX looks useful:

There are a ton more tutorials on creating fire and related effects in After Effects. Hopefully, this is a representative sample of the decent ones!